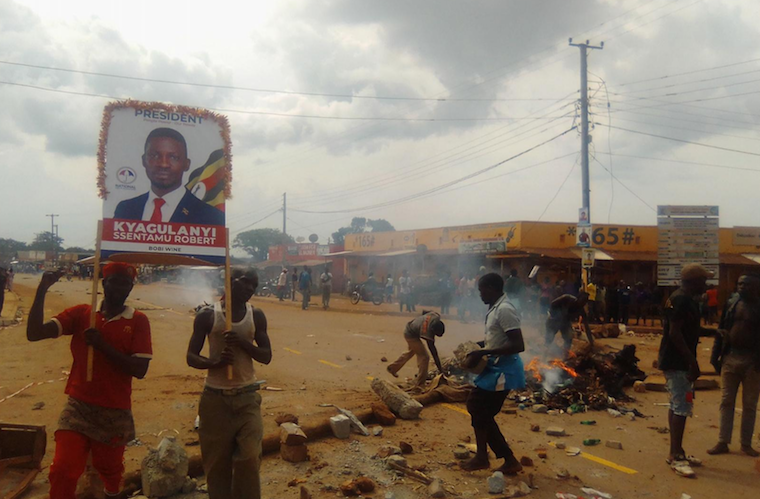 The arrest of National Unity Platform (NUP) presidential candidate Robert Kyagulanyi has sparked off sporadic protests across different cities in the country.

Kyagulanyi was arrested from Luuka district headquarters in eastern Uganda by police officers led by Frank Mwesigwa while addressing a mini rally. Kyagulanyi was detained at Nalufenya police station in neighbouring Jinja city.

According to the Electoral Commission campaign program, Kyagulanyi was meant to campaign in Luuka, Kamuli and Buyende districts. Kyagulanyi was arrested alongside two journalists namely; Ashiraf Kasirye from Ghetto TV and Samuel Balikowa who is attached to City FM radio for allegedly interfering with police duties.

Following his arrest, protests broke out in Jinja, Kampala, Masaka, Hoima, Gulu with the NUP supporters lighting old car tyres and blocking major roads in the cities. In Kampala, police have been battling NUP supporters in Kiseka and Nasser road since around 12.30 pm. NTV has reported that its recording equipment has been confiscated from downtown Kampala as their reporters covered the protests.

In Mulago and Kubiri, police has been engaged in running battles with the protestors for the better part of the afternoon. Prior to his arrest, police used teargas to disperse thousands of Kyagulanyi’s supporters who had converged at the district headquarters. Police officers were later seen battering journalists who were taking photos of Kyagulanyi's arrest.

Moses Bigirwa, the Kamuli NUP coordinator told journalists that police are yet to reveal the reasons for arresting their candidate. Police are still tightlipped on the circumstances surrounding Kyagulanyi's arrest.

Similar to other parts of the country where protests broke out, in Hoima, police fired teargas and live bullets to disperse Kyangulanyi’s angry supporters who took to the streets to protest against his arrest and detention. NUP supporters blocked the Hoima-Fort Portal road using logs, stones and tree branches paralyzing transport.

They also started burning car tyres in the middle of the road. The angry NUP supporters are also leading processions in various parts of Hoima city. They took to the streets at about 3:30 pm.

Business along the Hoima-Fort Portal road is also currently on standstill. Police being commanded by Charles Mubaale, the officer in charge of operations at Hoima Central police station is commanding the operation to disperse the NUP supporters.

Teargas and live bullets are being fired in all parts of Hoima city. Godfrey Ayebale one of the protestors says it is wrong for the police to arrest and detain Kyagulanyi during his campaign period.

Latif Nsubuga, another NUP supporter says it is unfair for police and the military to restrict Kyagulanyi from holding his campaign rallies yet the ruling National Resistance Movement (NRM) supporters continue to hold processions and rallies.

John Kugonza, another a NUP supporter says he is tired of the current NRM government, saying they need change and that Kyagulanyi should immediately be freed. Wyclif Byamukama also a Kyagulanyi supporter wonders why police are always against their presidential candidate. He says whether Kyagulanyi is in detention or not, they will vote for him.

Julius Hakiza, the Albertine region police spokesperson says police are being forced to fire teargas and live bullets to disperse the rowdy supporters and stop them from causing mayhem in the city centre.

In Masaka, once the news of Kyagulanyi’s arrests started spreading on social media and radio, protests sparked off by mechanics in Nyendo town; a suburb of Masaka city broke out. The protestors blocked the main road with burning car-tyres and logs, before paralyzing traffic flow, promoting security to intervene.

Security personnel comprised of anti-riot police personnel and the army were hurriedly deployed in the area, but the running battles between them and the rowdy protestors intensified. Police are currently firing teargas and rubber bullets to contain the protests that have spread to many parts of Masaka town.

Police have sealed off homes of the some NUP leaders in the area, who include Masaka municipality MP Mathias Mpuuga Nsamba, Florence Namayanja the MP Bukoto East among others.

Muhammad Nsubuga, the greater Masaka Regional police spokesperson says that they are working around the clock to restore order in the area. He indicates that the security is ready to respond to situations that may destabilize the area, warning that they arrest and prosecute the culprits.

Warning: You may find the videos disturbing.
This is how the car branded with Museveni campaign slogans and picture knocked and killed people down town. A voice in Luganda says "they're trying to burn the car"
Courtesy videos.
1/2 pic.twitter.com/hfL3dujhIU

They are just as mortal as anybody else. He will pay .Its a matter of time. What kind of elections is that where only he can campaign freely while his opponents have to ducking teargas rubber bullets and the threat of arrest?

They don't do that in civilized societies. They do it in pre stone age places where irrationality was the rule of the day. The guy is simply too greedy. Shame!
Report to administrator
+2 #12 Rwatooro 2020-11-18 20:32
M7 FREE BOBI WINE. WHATEVER YOU DO, THIS IS THE END OF YOUR DICTATORSHIP. ENOUGH IS ENOUGH.

YOU CANNOT FORCE US TO VOTE YOU!
tHE WHOLE WORLD IS WATCHING. DON'T TRY TO END LIKE GADDAFI.
Report to administrator
+2 #13 Webs 2020-11-18 20:53
The unacceptable arrest is merely a tactic by the tired old man to slow down Kyagulanyi who is moving at a terrific speed to cover the entire country in a very short time.

Initially they miscalculated that by delaying nominations would leave opposition inadequate time for campaigns.

The old man is now overwhelmed to see the young inspired Kyagulanyi covering the entire country in a single week. This offers him leverage to make more rounds as he combs each and every small town/village for votes. Bobi oyee!
Report to administrator
-3 #14 Wainanchi 2020-11-18 21:48
Hello guys!!!! Why are you so alarmed and shouting?? Why are you angry???

Do you seriously think that you may use violence, fight,insult and the other side will turn the face and allow violence and it's principal agitator to continue to undermine and attack Uganda??

No hell no!! Those who are playing with fire will burnt the fire.Club has two ends..those using force are getting response and consequences of their actions from the other side of club.

Forward Uganda security .Trash their assess boys and girls in security uniforms Your task is to protect safety and security of Uganda against any form of violence Who is giving right and authority to Bobi Wine Dingo to incite violence as s presidential nominee.

He is one of the nominees and not yet voted by the people.To hell with that thug Dingo Dog!!
Report to administrator
0 #15 WADADA rogers 2020-11-18 21:50
There is this not so intelligent guy called Enanga always speaking as if he does not have brains in his head, RIP Kawesi, you did a commendable job while you were the police mouth piece.

Enanga is in the same league as as Simeo Nsubuga. Kasingye, Nabakooba and Henry Kalulu were better in approach. These guys need to be reminded constantly that Bobi wine is not just a Presidential candidate, but a President in waiting
Report to administrator
+1 #16 Apollo 2020-11-18 23:55
The spontaneity of country-wide mass action clearly overwhelmed the armed forces.

The simple action of laying boulders and other materials in the road, immobilized the mechanized units of Police and army, thereby cutting off a key strength: concentration of mechanized coordinated action.

In turn, isolated pockets of police personnel were easily attacked and made to withdraw from different sectors of cities and towns.

This partly explains why posters of the NRM candidates were easily tore down and set alight. Here in lies the great weakness of former IGP Gen. Kayihura's philosophy of concentrated mechanized forces. A few boulders in the road rendered it useless.
Report to administrator
0 #17 Porito 2020-11-19 06:00
Though The Electoral Commission and the Ministry of Health puts the campaign regulatory policies against the candidates, for covid-19 pandemic, The two "bodies" should also put the perception of the supporters of these candidates in a manner that favors evey candidate for equality and equity.

It's not only the effect of covid but also the impression of the huge/massive supporter of specific candidates to the other. Thus using the advantage of Power And Authority to order the police to act anyway.

This is why we shall never have Free and fair Power transmission some Government positions.
Report to administrator
0 #18 WADADA rogers 2020-11-19 08:12
For those of us who may have watched the animal channels, you will know that meat eaters such as leopards, lions, jaguars and cheaters use the system of divide and rule to get prey, they scare animals that move in groups and as they start running, they identify the weakest and attack, if only these animals could unit, stay put and remain in one place, the enemy will be made vulnerable and will not harm.

But for our opposition, things are different, they all run different directions whenever there is a political threat and leave m7 to win easily.
Report to administrator
0 #19 WADADA rogers 2020-11-19 08:18
But lets also have a black book for tormentors, we shall see what to do wit them when the storm is over
Report to administrator
0 #20 Lakwena 2020-11-19 17:32
Quoting Wainanchi:

Do you seriously think that you may use violence, fight,insult and the other side will turn the face and allow violence and it's principal agitator to continue to undermine and attack Uganda??

Forward Uganda security .Trash their assess boys and girls in security uniforms Your task is to protect safety and security of Uganda against any form of violence Who is giving right and authority to Bobi Wine Dingo to incite violence as s presidential nominee.

He is one of the nominees and not yet voted by the people.To hell with that thug Dingo Dog!!

In other words Wainainchi, you are confirming that Gen Tibahaburwa is a parasite (Kawukumi), the "Author and Master of Violence, and using the Uganda Police and his UPDF to fight for his political and family survival.
Report to administrator
12