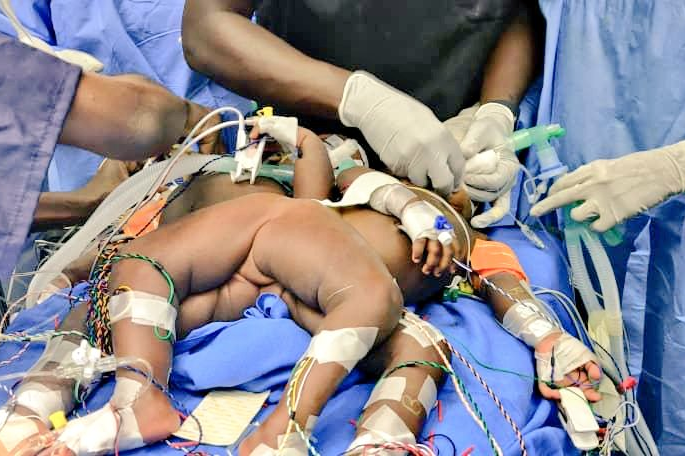 The siamese twins after the operation

Dr Philis Khisa, one of the doctors involved in the operation said that the process started last week with an investigation technically known as, scoping where they had to identify the exact organs that the twins shared.

Dr John Sekabira, a consultant paediatric surgeon who led the team, told journalists on Tuesday that the siamese twins’ rectum was fused at the end, they didn’t have a separate vagina, shared a urethra and the spinal cord was joined at the tail end.

"The rectum, we realized that it was somehow fused at the distal end but upwards it was separate. And the vagina, you could not see a separate vagina, the uterus you couldn’t demonstrate and the urethra - that is the passage of urine from the urinary bladder was shared. So from then on, we formed a team of specialists of orthopaedic surgeons - that is surgeons who operate on bonds, vesicular surgeons who operate on blood vessels, neurosurgeons because the spinal cord was also joining together at the tail end," said Sekabira.

The operation that started at around midday on Monday ended at 9:00 am the next day, with the doctors referring to it as one of the most complicated procedures which have to be done slowly and carefully since it also involved separating blood vessels.

"Immediately we got them, we did abdominal ultrasound which is the easier investigation to do. We found that the hearts were separate, they each had two kidneys, they had separate urinary bladders but what was striking is that you couldn’t follow properly where their rectums were - they were conjoined at the pelvis at the bone called the sacrum," added Sekabira.

The separation of the babies didn’t happen until 4 am according to Dr Khisa, adding that this is a major milestone as the children had been kept under monitoring since December 21 when they were referred from Lira hospital three days after birth through a caesarean section operation.

During the lockdown in April, the couple requested to go back home following a halt in non–emergency health services.

“Unfortunately the children got malnourished. The parents could not afford proper feeding so we had to treat this before embarking on this operation," Dr Khisa added.

In September, they started the early processes with plastic surgeons putting them on tissue expanders which were used to cover the defect. Sekabira says the babies are to remain admitted in the hospital for six months to one year as they await another surgery to correct other tissues like the reproductive system such that each can live healthily on their own.

However, conjoined twins especially in African countries like Uganda rarely survive, and when they survive they usually don’t survive beyond the surgery. Uganda’s first conjoined twins to survive were operated on seven years ago in a surgery that was conducted in Egypt.

Dr Byarugaba Baterana, Mulago hospital director says the earlier operation was conducted by Ugandan doctors who travelled abroad because the country didn’t have the necessary equipment for the operation which can go in the highs of $10,000 in countries like India and much higher in the West.

The operation which is also the first to be conducted at the new super-specialized theatre facility was conducted free-of-charge during their test running initiative before fully opening for other tertiary operations like organ transplants.

Annually, 3 to 4 siamese twins are referred to Mulago hospital, but many times they only have to do emergency operations. For instance, recently Dr Sekabira says they had to conduct an operation on twins where one died.  The other twin didn’t survive the operation either.

• NWSC sh’d have a team in charge of Mulago Hospital to ensure burst pipes are repaired and water supply is consistent.

• Umeme sh’d have a dedicated team for Mulago Hospital to ensure power supply is consistent.

• The hospital director sh’d ensure the cleaning company is paid well and promptly to ensure Mulago is clean in and out.The place is always littered by patients & carers.

• Mulago should be a centre of excellence where students patients learn about health & hygiene.
Quote | Report to administrator
0 #3 Kabayekka 2020-11-18 12:51
Interesting indeed for such professional to work without any pay.

That is risking their families at home who might be starving as Dad works 24 hours on a minimum wage.
Quote | Report to administrator
0 #4 Lakwena 2020-11-20 12:30
Quoting Kabayekka:

Interesting indeed for such professional to work without any pay.

That is risking their families at home who might be starving as Dad works 24 hours on a minimum wage.

But Kabayekka, there is no such a thing as no pay. Since we pay taxes through our noses; Ugandans pay.

Unfortunately it is Gen Tibahaburwa who told the world that he is neither our servant nor employee; who abuses our taxes as if we are his slaves.

In other words, a slave is someone/people whose products/fruits of efforts are disposed off by others. Gen Tibahaburwa and cabal are heartless slave masters of violence, who use and abuse our taxes by whim and caprice.

Otherwise, Ugandans should be having better in all social services deliveries.
Quote | Report to administrator
Refresh comments list
RSS feed for comments to this post
Add comment