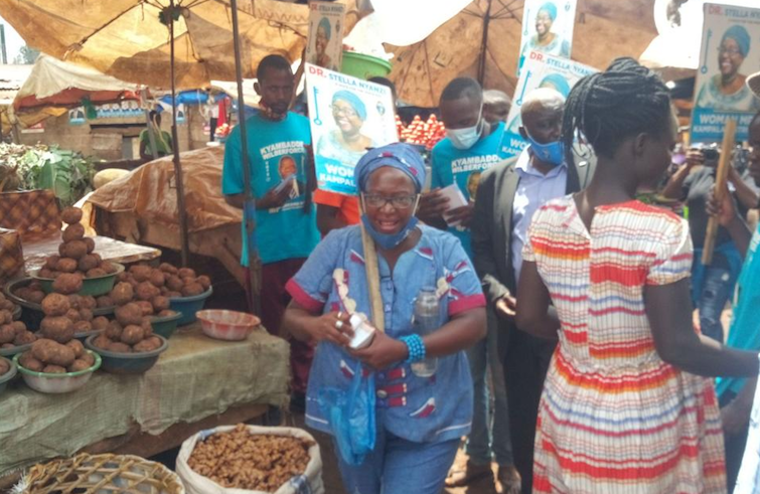 Dr Stella Nyanzi, the former Makerere University academic researcher and Forum for Democratic Change (FDC) Kampala Woman parliamentary candidate, says it is disheartening to see how Ugandans have been reduced to beggars within their own country.

Speaking on the sidelines of her campaigns in Nakawa Division in Kampala on Tuesday, Nyanzi said that everywhere she has gone, even before listening to what she is going to do for the electorate, people first ask for handouts like; T-shirts, money, masks or local gin (waragi).

"It is debasing, it is very dehumanizing, it is being lower than the lowest that even before a person says; hullo, my name is X, they are saying give me a T-shirt, give me soap, give me sugar. I think for me the idea that all Ugandans see and hear a candidate is that am going to ask for waragi or soap or whatever is not disgusting but very sad. I feel sorry that we have been reduced to that. And I say to them; why do you just beg for things, why do you just take my pledge of commitment and listen to my manifesto, and they are like; people have told us about manifestos and they never come back. The only time am going to get you as a candidate coming to me is now. Give me what you have for me now, let us talk about what you’re doing for me now'," Nyanzi said.
Indeed, when our reporter moved with Nyanzi on her door to door campaigns, a number of people especially in Nakawa market could heard asking for handouts.
“Dr Stella Nyanzi we are going to vote for you but we are thirsty, come and buy for us some water,” said one woman who only identified herself as Hanifa.

When asked why she was asking for handouts from a candidate, Hanifa said everyone they vote for never comes back or fulfils their manifesto, and that the only time that they can also 'squeeze' something from them. In the interview, Nyanzi said this has been very frustrating for her especially considering that campaigns are mainly door to door.

Nyanzi also talked about her fundraising drive for her campaigns. Two months ago, she put out a call for funding on her Facebook timeline asking well-wishers to help her raise Shs 1.3 billion.

She said the post surprised many people because of the sheer amount of money she needed. However, she said by the look of things, this was a even conservative figure because new estimates show that she will need more money to pay her campaign agents across the almost ninety parishes in Kampala. She disclosed that so far she has raised about Shs 30 million through fundraising.

She says her previous donors for her research works have made it categorically clear that they don't fund political activities and hence she has to rely on smaller money donations of Shs 1,000, Shs 2000, Shs 5000 and that the most contribution she has received so far from any Ugandan is Shs 100,000.
Last month, Nyanzi shocked many when she put out a Facebook post calling for funding from pro-gay personalities in the United States of America and the United Kingdom.

In the interview, however, she said her post was not aimed at Sir Elton John an open gay pop musician and Ellen DeGeneres, a TV presenter and an actor in the US, but her opponents in the race who had made it a habit to attack her because of her academic work with gay communities.

"After that Facebook post, that the smear campaign died a natural death. Nobody has asked me about homosexuality ever again because what I also did with the post is to acknowledge, yes I have done a lot of research as an academic who has specialized. I have a PhD in human sexualities using anthropological methods. I have studied the homosexual question in Uganda, I know these communities. I have lived with them, I have worked with them. I also acknowledge, I have published knowledge, I have published academic scholarships on the topic as an anthropologist as a Ugandan interested in the Anti-Homosexuality Bill and the Anti-Homosexuality Act and then the nullification of that Act but also as a medical anthropologist who understands homosexuality within the broader context of health and illness in Uganda. So I think that my strategy worked," said Nyanzi.

She added that actually, in the end, the two gay personalities she was writing to never responded or gave her the money, but the post helped her to stave off her critics who were depicting her not only as a promoter of homosexuality but a lesbian herself.

Nyanzi is competing with eight other contestants including the National Unity Platform’s Shamim Malende, Democratic Party’s Sumayyah Muwonge and National Resistance Movement’s, Faridah Nambi among others.