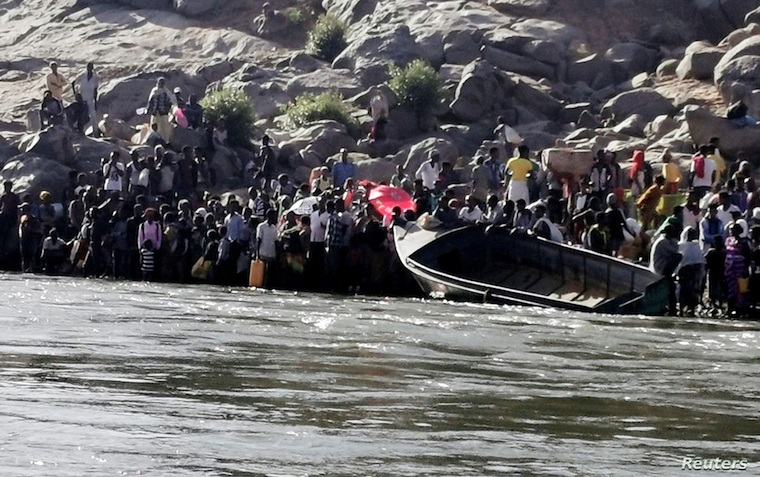 Ethiopians who fled the ongoing fighting in Tigray region prepare to cross the Setit River on the Sudan-Ethiopia border in Hamdait village in eastern Kassala state, Sudan

The conflict in Ethiopia’s rebellious Tigray region is less than two weeks old but is already having a growing regional impact, with effects felt in Sudan, Eritrea and Somalia.

Ethiopian government forces have captured the town of Alamata, 120 kilometres from the Tigray region’s capital Mekelle, after nearly two weeks of fighting. Mustafa Ali is a Horn of Africa security expert. Despite the capture of Alamata, he says the federal government is facing a long conflict.

“This tells you that Ethiopia is advancing and it’s going to capture more ground, but here is the challenge," said Ali. "This war might turn to, become a major blown-out guerilla fighting that will be very hard for the Ethiopians to dislodge the TPLF.”

Ethiopia’s military attacked fighters loyal to the Tigray regional government this month, after Tigraian forces allegedly assaulted a military base. The war has already sent more than 20,000 civilians to flee to Sudan for safety, a sign of the region's worsening humanitarian situation.

The war escalated in recent days. Tigray’s regional president, Debretsion Gebremichael, said his forces attacked Eritrea with missiles and warned there will be more attacks. Tigray accuses Eritrea of sending troops to attack them -- an allegation denied by Eritrea.

Ali says the involvement of Eritrea will strengthen the Ethiopian government's chances of winning the war.

“The war is going to be more deadly and there will be a lot more refugees coming out of the conflict itself...The entry of Eritrea will give Abiy Ahmed an upper hand in that he will be able to use the Eritrean forces, their expertise and understanding of the terrain because all these are Tigrains," said Ali.

Ethiopian Prime Minister Abiy Ahmed said Sunday his forces can handle the fighting and don't need assistance from another country. In recent days, the Ethiopian government has pulled some troops from Somalia to help quell the armed uprising. That move may have a negative impact on Somalia, says Comfort Ero, the Africa program director for the International Crisis Group.

“This puts Somalia into jeopardy, especially as Somalia gets ready for parliamentary and presidential elections and there is a close relationship between Prime Minister Abiy and President (Mohamed Abdullahi) Farmaajo…the most worrying concern would be what this means for Sudan given its own fragile stability at the moment and Somalia as it enters election," said Ero.

“There is widespread inter-communal fighting going on across the Oromo region, Amhara region, across the Somali and southern people’s regions and the army quite often has to be deployed to contain that and in particular, situations where local security forces are unable to do so," said Murphy. "The fact that now the federal government is involved in this conflict against the Tigray region is only going to stretch that capacity further and force Abiy to partner tough decisions about the deployment in Somalia, whether that means AMISOM or more broadly.”

AMISOM is the African Union Mission in Somalia. Uganda President Yoweri Museveni, United States, the United Nations and other world powers have called for a halt to the fighting and start of mediation efforts – so far to no avail, as the federal government has ruled out any talks with the regional leaders.