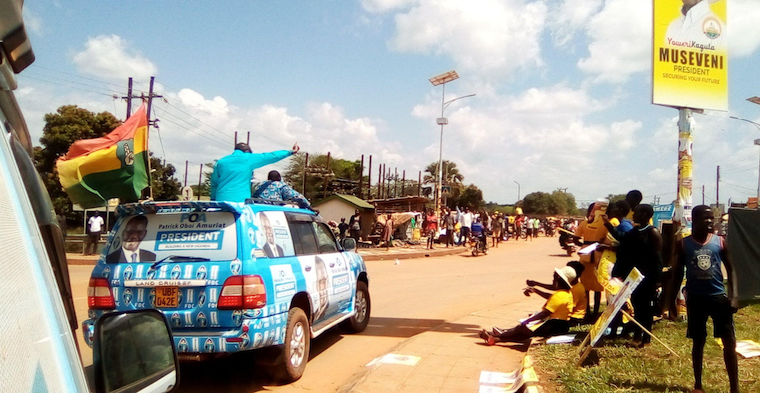 Patrick Oboi Amuriat drives through Kitgum shortly after his release

Amuriat was arrested from Kitgum Matidi sub-county while coming from Kalongo town council in Agago district, where his campaign was foiled by police yesterday Monday for allegedly showing up past the campaign time of 6 pm. While at Matidi, Amuriat came out of his vehicle to wave to his supporters.

Police responded by firing teargas to disrupt the procession, which had begun attracting numerous locals. The police commanded by both the Kitgum and Lamwo district police commanders Tommy Eyaku and Moses Akena respectively later picked up Amuriat and bundled him into a police vehicle before speeding off.

Amuriat was driven at breakneck speed through Kitgum municipality in a bid to avoid his entourage and supporters from disrupting President Yoweri Museveni's campaign in Kitgum municipality. Earlier, the police in consultation with the Electoral Commission diverted Amuriat from holding campaigns in Kitgum district where his schedule collided with that of Museveni.

Amuriat was given a new campaign venue in the neighbouring Lamwo district and directed not to pass through Kitgum district.

Following successful negotiations between his campaign team and police led by Aswa River Region police commander, Ezekiel Emitu, Amuriat was later released. However, shortly after his release, Amuriat unexpectedly returned to Kitgum municipality where he'd been forced out earlier.

He caused excitement at Akurukwe market in Central Division where he drove through crowds of mostly ruling National Resistance Movement (NRM) party supporters donning yellow T-shirts as they waited for Museveni.

He also later drove to the FDC party offices where he teamed up with the Chua West legislator, Philip Polly Okin Ojara, a staunch FDC supporter.

Amuriat spent close to 30 minutes as police tried to battle with his surging supporters and lure him out of Kitgum ahead of Museveni's arrival. He was later again driven out of town by police through Kitgum Matidi-Mucwini road after successful negotiations.

+4 #1 Ainebyana 2020-11-17 20:33
When you fight someone whose hands are tied behind his back, does it really surprise anyone that you might even win that contest.

When the emperor is naked, we shall get to know in the history books.
Report to administrator
0 #2 Nseka Mali 2020-11-17 22:36
Some people need to have their heads examined by a psychiatrist!!!
Report to administrator
0 #3 WADADA rogers 2020-11-17 23:05
What i can ask of the registered voters is to sit back in the comfort of their homes and think objectively, imagine these opposition candidates were your parents, your brothers or children, would you enjoy seeing them being tormented for choosing to contest for Presidency, is it a crime to declare intentions to contest.

if the answer is no, then take a decision to vote Kyagulanyi who will work with the rest of the opposition to propel this country to the future, forget about those slogans of securing your future, that is not going to happen.
Report to administrator