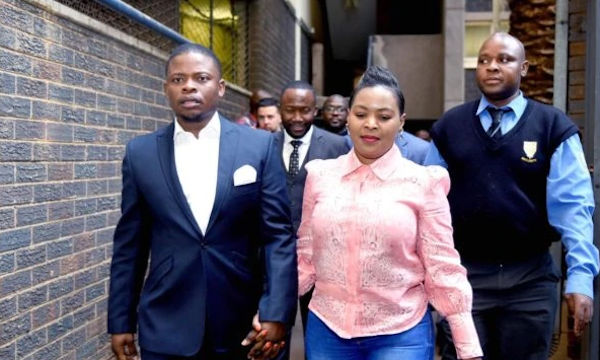 FILE Bushiri and his wife Mary

A Malawian self-proclaimed prophet, Shepherd Bushiri, who is based in South Africa has fled to Malawi, violating one of his bail conditions following his arrest in October in South Africa for theft, fraud and money laundering.

Bushiri and his wife, Mary, were arrested with two others in October in a multimillion-dollar money laundering case but were granted bail November 4. He preaches in his Enlightened Christian Gathering church, which has over 70 branches across the world. Among the bail conditions was that they would surrender all travel documents and not leave South Africa.

In his televised press conference in Malawi Saturday night, Bushiri said the couple has fled South Africa for security reasons, claiming some people wanted to kill him. He did not specify why.

However, Bushiri did not disclose how he entered Malawi. He said he would only return to South Africa if South African authorities assure him of his safety and that he would not be rearrested for violating bail conditions. South African police say they are investigating how Bushiri escaped the country without travel documents.

Police spokesperson Katlego Mogale told South African Broadcasting Corporation (SABC) Saturday that police discovered Bushiri’s escape when he failed to report to a police station Friday, as required under the terms of his bail.

“We cannot divulge what has transpired until we found out that this does not comply with bail conditions. It is this part of the investigations that we do not want to reveal," said Mogale.

There was widespread public speculation in Malawi and South Africa that Bushiri might have fled South Africa with Malawi’s President Lazarus Chakwera, who was on a two-day official visit to South Africa and returned on Saturday, but Chakwera’s press office has vehemently denied this.

However, in a tweet on Saturday, South African minister of Justice and Correctional Services Ronald Lamola said his government will ask Malawi to have the ‘fugitive’ extradited. Malawi government spokesperson Gospel Kazako told a South African TV station that Malawi is waiting for a formal South African request to act on the matter.

“South African government is our friend, we respect it and certainly if they are going to make any contact with us we will certainly respond accordingly. At the moment there hasn’t been any contact and there is absolutely nothing we can do about it,” said Kazako.

However, Bushiri says he was planning to meet with Malawian authorities Monday to raise his concerns over how he is being treated in South Africa.  Garton Kamchedzera, a law professor at the University of Malawi has faulted Bushiri for violating the bail conditions set by Pretoria Magistrate's court in South Africa.

Kamchedzera has urged Malawi to deal with the matter according to the law to avoid harming diplomatic relations with South Africa.

He once brought the charlatan here. Show me your friends..
Quote | Report to administrator
0 #2 Jonathan 2020-11-17 20:51
I suspect that criminal elements within South Security system might have assisted self-styled prophet Bushiri to flee from the long hand of Justice in South Africa.
Quote | Report to administrator
+1 #3 Wooden K. 2020-11-17 21:37
Just asking : of what interest is this story to us Ugandans ?

Right now , there is major story obout Uganda Bafere "pastas" who have been operating with very big Army and Police Officers to defraud thousands of citizens and non-citizens.
Notorious Fat Mondo is right in the middle of this one.