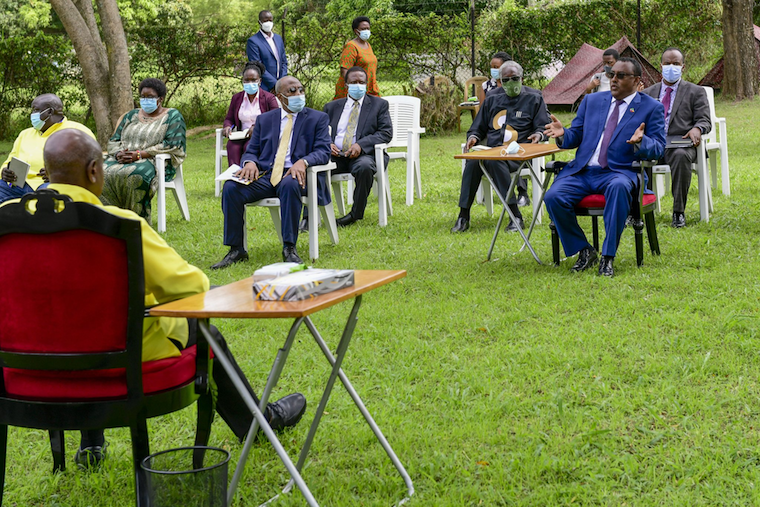 President Yoweri Kaguta Museveni has called on the government of the Federal Republic of Ethiopia headed by Prime Minister Abiy Ahmed to negotiate with the Tigray regional government so as to restore peace in Ethiopia.

Speaking at Gulu State Lodge to a delegation headed by the deputy prime minister of Ethiopia, Demeke Mekonnen Hassen, Museveni said, it's only through talks that the two sides will be able to find a solution to the issues that caused the altercation now in its second week.

Museveni noted that it was wrong for African countries to focus on the politics of ethnicity federalism rather than interest. He said that it was only through oneness and focusing on the common interests of the people in Africa that could bring about prosperity.

“The problem in Africa is that we never discuss ideology but rather focus on diplomacy. We must watch out for our ideological mistakes. If we keep making them, the end results might be severe. Emphasis must be put on oneness and common interest,” said Museveni in a press statement issued by his office.

According to reports, thousands of Ethiopian refugees have continued pouring into Sudan, escaping a worsening conflict that has spilled over Ethiopia’s borders and now threatening to destabilize the wider Horn of Africa region. The United Nations High Commission for Refugees said on Sunday that more than 20,000 people have crossed into Sudan from Ethiopia’s northern Tigray region, where federal government troops are battling forces loyal to the Tigray People’s Liberation Front (TPLF), the party of the regional government.

Sudanese state media put the number of refugees at almost 25,000. This figure is expected to rise to as many as 200,000 refugees in the coming few weeks if the conflict rages on. There are already allegations of massive massacres of civilians which some human right agencies have equated to crimes against humanity.

Abiy, who has been the Ethiopian Prime Minister since April 2018, had been credited for trying to reform the country that has a history of repressive regimes. Although he is generally regarded as a man of peace, the very reason he won the Noble Peace Prize of 2019, he has vowed to continue his offensive until the Tigray Forces stand down.

But Museveni advised that immediate negotiations must come into place to see to it that the war is not prolonged as it might lead to massive loss of lives and the dwindling of the economy.

He added that, because Ethiopia was one of the oldest countries in Africa which was never colonized, it had an image to protect since it represents the whole of Africa. For his part, Demeke noted that despite the current situation, the Ethiopian government’s immediate plan was to ensure that the lives of the civilians are protected.

How ironic: that the "author and master of violence" and remaining "Problem of Africa", gives counsel to the Ethiopian warring factions.

When e.g. in 1985, former Kenyan President, Daniel Arap Moi urged Mr. Tibahaburwa and his NRA to negotiate peace with the UNLA; who acted treacherously, defected and caused the 25-year bloodbath in Uganda?

How can Mr. Tibahaburwa talk about ",,, common interest" when he already told the world that he is only fights for himself, family and belief (vanity)?

In other words, what a conman for people to come to and listen to his nonsense!
Quote | Report to administrator
+2 #2 kabinda 2020-11-17 08:39
Talk about ignorance. They say it is a disease and Muaeveni could not have made it more obvious.

That is preposterous to even contemplate. Ridiculous! There is nothing wrong with having an ideology. If so then the idea of pan Africanism that he pretends to promote would be a problem going by his definition.CRAZY!
Quote | Report to administrator
0 #3 Akao 2020-11-17 21:37
What does museveni know about peace? When his police and army are killing ugandans on their own streets everyday.

Observer why does your paper write this kind of article?? Museveni just need to SHUT UP and LEAVE!!!!
Quote | Report to administrator
0 #4 Kalibbala 2020-11-17 21:54
“The problem in Africa is that we never discuss ideology but rather focus on diplomacy.

We must watch out for our ideological mistakes. If we keep making them, the end results might be severe. Emphasis must be put on Bla Bla bla bla

Today You are Tormenting Poor Ugandan Folks by Unleashing your Killer Machinery in Names Of Kale Kalekezi Kayihura,Aguma, Sobi,Tumwine and Kitatta to Shoot and Kill innocent People or Tear gas them with Expired Poison..Simply Because Uganda ceased to Exist on the World Map!!

The Data era has Overran your ambitions! The World is watching and the Ball is now in the Hands of Ugandans to Defend Themselves or Die like rats!
Quote | Report to administrator
Refresh comments list
RSS feed for comments to this post
Add comment