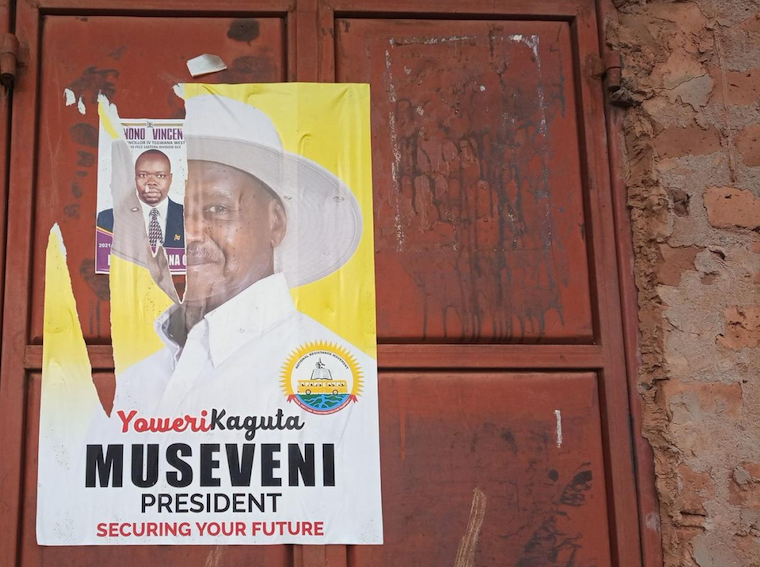 Several campaign posters of Forum For Democratic Change (FDC) candidates in Gulu city have been defaced ahead of the National Resistance Movement (NRM) presidential candidate, Yoweri Museveni’s campaigns in the area.
Museveni is expected to hold a campaign rally at Watoto Church open grounds in Layibi-Bardege Division Gulu city later today. But his visit has cost FDC candidates their campaign posters. Some of those whose posters have been defaced include the FDC presidential candidate, Patrick Oboi Amuriat, leader of opposition in parliament (LOP) Betty Aol Ocan and Patrick Oola Lumumba, the Layibi-Bardege FDC mayoral candidate.

Most of their campaign posters that were pinned along Gulu Main street, Coronation road, Ring road, Market Street and Bank Lane among others have disappeared without any trace. Patrick Oola Lumumba, the Gulu City FDC party chairperson told URN today Monday that the campaign posters of their candidates were either or torn covered by Museveni’s posters.

He noted that the defacing started about two weeks ago, saying that he personally lost several of his posters pinned in different locations. Oola suspects that this is the handwork of agents of the ruling NRM party. He has threatened to forward the matter to Electoral Commission for redress.

Samuel Oyet Agwani, the NRM Gulu City media coordinator downplayed the accusations levelled against his party, saying FDC party members are defacing their posters to tarnish the image of the ruling party.

Early last week, Simon Wokorach alias Batak, the chairperson Gulu City Boda-boda Association revealed that they had received information that some boda boda operators in Gulu and other parts of Acholi sub region are being used to deface campaign posters.

Section 82 (2) of the parliamentary Elections Act 2005, makes it illegal to deface campaign posters. It states that a person who maliciously tears, defaces and removes a poster of a nominated candidate commits an offence is liable upon conviction to a fine not exceeding twenty currency points or imprisonment not exceeding one year or both.

Or succumbing to the Devil's three temptations to Jesus. E.g. bow to me and I will give you part of my Kingdom (Gulu City, Roads, Dam and Sugarcane plantation, etc.) Eish

The people of Acholi Sub-region must be reminded again and again, what Gen Tito Lutwa (RIP) cautioned them about in December 1994. Tito warned them against supporting a treacherous system/party e.g. the 1985 Nairobi Peace Talk (Joke)" that was responsible for the deaths of hundreds and thousands of their sons and daughter, and the nasty insults they have suffered.
Report to administrator
+2 #2 Lakwena 2020-11-16 16:40
Unfortunately, after Mr. Tibahaburwa referred to him (Tito) as swine; Tito's son, non other Henry Okello Oryem, thew his fathers caution to the wind, sold his birthright and soul; and now sits on the right hand side of Mr. Tibahaburwa, and arrogantly whitewashes all the evil done to the people of Greater Northern Uganda.

Beatrice Anywar, Odonga Otto, Hillary Onek, etc.; all from the direction of Kitgum where Lutwa came from, have joined the treachery and: Hurray, Hail, and long live Gen Tibahaburwa!

In other words, when a son/daughter sells his mother/father for a fee and betrays countrymen and women then you know Hell has broken loose, and the next generation is doomed.
Report to administrator
+2 #3 kabinda 2020-11-16 17:50
When you are barbaric, you are hostile to intellectual exchange of ideas. a so called leader who stays silent in the face of barbaric acts is himself barbaric.

For a country that desperately needs a rigorous debate and consensus on the way forward from a largely peasant pre industrial economy with a few sprinkles of modernization, this is only taking several steps backwards. This Museveni junta is a curse on Uganda.
Report to administrator
0 #4 Jamil 2020-11-17 08:18
I just wonder the rout taken by our country coz many ugandans in villages say the country is peaceful yet many aggressive things keep on happening to our mentors
Report to administrator
0 #5 WADADA rogers 2020-11-17 22:37
Its okay, let them pull down the posters, the message is written on every heart, every body id yearning for change and guess what, chance has availed itself. now is the time
Report to administrator