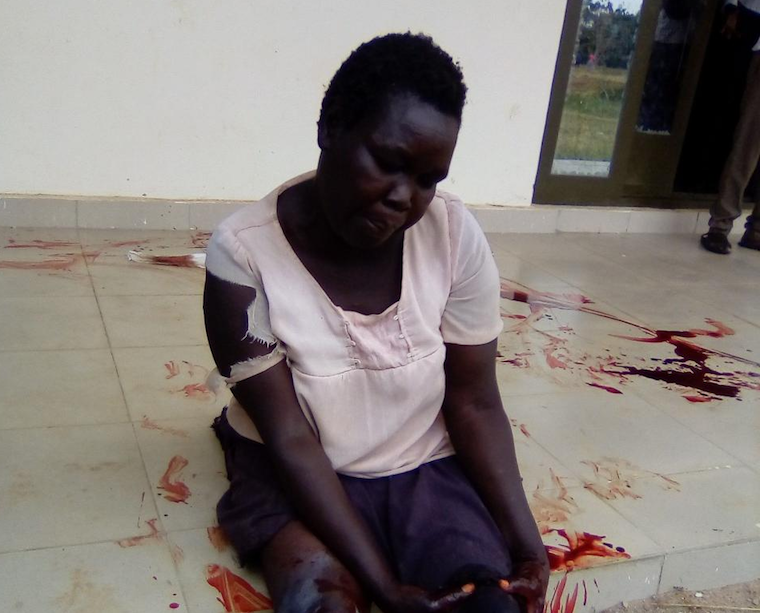 A 54-year-old woman has been admitted at Kotido health centre IV with a shattered leg after being hit by a teargas canister.

Rosa Napio, a health worker at Kotido health centre IV, says although Alanyo is in pain, she has now stabilized.

“We are managing her condition and she is stable,” said Napio.

Alanyo said from her sickbed that the injury has left her helpless and unable to fend for her 4 children. A police officer on Kyagulanyi’s security detail was also injured during an altercation between the local police and the guards in Panyangara in Kotido municipality.

NUP supporters lined the roads to cheer Kyagulanyi prompting police to disperse them with tear gas and live bullets.

Police had earlier on tried to divert Kyagulanyi’s convey via senior quarters at Muria Gaz to the Mayor's Garden next to Kotido Central police station (CPS) where he was scheduled to address his supporter without reaching town but he manoeuvred his way and ended up in the central business district.

12
0 #11 Wainanchi 2020-11-16 12:06
Wainanchi is just telling the truth and facts.You may like it or not but each country has its protection and security bwhich maintains peace and security.

Thugs and criminals would rule.Look at Lybia for example.Those blood thirsty commentators writing here were attacking Quadafi as dictator .Quadafi gave everything to his citizens.

Above all peace and security good life Today Lybia is on its knees bleeding and crying Uganda is wide awake and no traitors like Tumukunde ,Akot,Wadda Rogers--- Lakwena can make Uganda spill blood and go to Peace's We have Father if Uganda Yoweri Museveni to protect us.
Report to administrator
0 #12 Juwait kali 2020-11-16 23:35
Milk man wanainchi in the end when the so called strong leaders like Museveni/qaddafi do go.

And when they go every thing come crushing down why? Because they build a house for one person. No institutions to hold the country together.

That's why we resist them. Somalia Libya, Iraq, Congo, and Rwanda where you came from as a refugee extraaa.
Report to administrator
0 #13 Juwait kali 2020-11-16 23:47
And because you grew up raising cows you think humans are cows too.

Which law and order or security can that woman in picture talk about?? Obviously you mean tear gas which is going to give people living in Uganda cancer there after. Otherwise you are just a power hungry hayna.

What other evidences does the world need in order to prove beyond reasonable doubt that: this is the characteristic and handiwork of the "author and master of violence", Gen Mr. Tibahaburwa, Yoseri Kaguta Museveni, fighting Ugandans for personal gratification.

As Santa Alanyo skid and soak in her own tear of pain and blood, NRM members like Wainainchi and Kasule Lumuba of this country is all cheers; saying: "Long Live Tibahaburwa the father of the nation".

In other words, in order to keep Mr. Tibahaburwa life president and the Problem of Africa; how many Santa Alanyo should be teargassed, maimed and/or murdered by fellow countrymen/women in the Ugandan Police and UPDF?

Just asking
Report to administrator
0 #15 Lakwena 2020-11-17 12:07
In other words, in the political history of this country; including the Brits Colonial era, It is only under Mr. Tibahaburwa that Ugandans have seen so many guns, teargas, raw brutality, torture, bloodletting and dead bodies.

God where are you?
Report to administrator
12