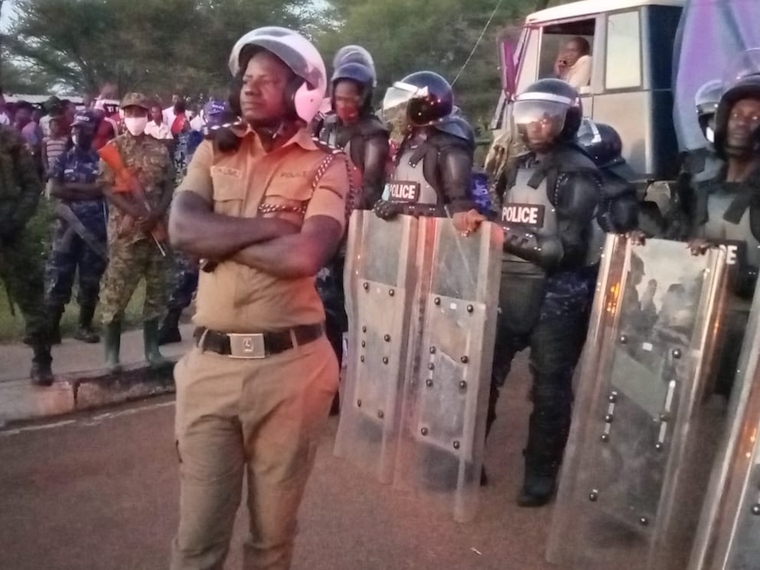 Motorists in Moroto town in northeastern Uganda got held up in rare traffic jam after police mounted at least 7 roadblocks to block National Unity Platform (NUP) presidential candidate, Robert Sentamu Kyagulanyi from appearing in Ateker FM radio studios.
Dozens of vehicles destined to and from Moroto were held up for several hours as the police barricaded the Kotido-Moroto road at Naitakwae - some 3 kilometres to Moroto town.
Heavily armed police officers led by Moroto district police commander, Jude Nasucha barricaded the road a few meters from Naitakwae, where Kyagulanyi had just finished addressing a massive campaign rally to block him from accessing Moroto town where he had booked airtime on the radio for a talk show.
In futility, police fired teargas at the unrelenting youth who were chanting "Bobi, Bobi, Bobi". A visibly emotional Kyagulanyi knelt atop of his car and bowed in appreciation of the seemingly surprising support from the area which has long been considered a ruling party stronghold.
The officers directed Kyagulanyi to head to Soroti town where he's scheduled to hold another rally today. Kyagulanyi, who is popularly known by his musical stage name as Bobi Wine, noted that the police were being used by the incumbent President Yoweri Museveni to frustrate the opposition.
He also said he wasn’t surprised by the police actions, which always favour the incumbent. Kyagulanyi also faulted the Electoral Commission for being timid in addressing the issue of a balanced playing ground for all candidates and doubted its capacity to deliver free and fair elections.
Paul Okumu and Mike Ebiru who were heading to Tororo and Soroti respectively expressed their frustration over the barricade. Another female passenger, who declined to give her name, decried the conduct of the police targeting opposition candidates. In Moroto, all the streets were covered by military and police presence on Friday.

Electoral commission is one sided.

Byabakama and Badiru kiggundu from the commission were complaining of social distancing. A bullet has no cure, Covid-19 has a vaccine.

Ugandans MUST not put themselves in more trouble with Museveni & his war dogs by going for yet another fake election, especially as they are already being suppressed, teargased, blocked...well before the great day that will announce Museveni's victory & assures his 40 years!
Report to administrator
0 #12 Akot 2020-11-15 18:41
Quoting Ainebyana:

You can't fight with your opponent's hands tied behind their backs, and you fail to win.

Under the circumstances, it would surprise everyone if an imbecile failed to win. The incumbent will go down in history as a man who won in unfree and unfair elections.

And it's Ugandans helping the incumbent go down in history as a hero & not like Kadaffi, Sadam Hussein...!

Isn't it time Ugandans start looking at themselves & country WITHOUT Museveni around, as he too, will 1 day die?

No Wonder Uganda is being Misruled by a Mad Man! Yoseri Tibuhaburwa Rutabayisirwa from Gisenyi, a Refugee who was Welcomed by Us has been living on our Sweat and Blood!]

Yet, we are busy helping him rig another fake election, instead of UNITING to say NO to him once & for all!
Report to administrator
0 #14 Akot 2020-11-15 19:01
Ugandans should be reminded of what Remase said not long ago;

...it's not easy to open each and every eye of our fellow Ugandans to see who really M7 is, a hard core criminal, whose only interest, is to make Uganda a family property.]

Isn't it time Ugandans believe Museveni is also human & will 1 day be no more & they will then have to look at one another in the face?

Or are Ugandans alright with the family business & Museveni's member of family will just take his place, reason they are going for fake election to legalise the demon & assure the family legacy continuity?

Ugandans know bringing down the tribalistic system & UNITY will block Museveni, so they won't go for it, while fake elections assures his 40 years & continuity of the family business!
Report to administrator
+1 #15 kabinda 2020-11-16 15:25
This is a a level of stupidity not seen anywhere in this world. One day Museveni will go and that is a certain fact you can take to the bank.

Then what do all these hooligans and thugs called police go? Is that protecting and serving people?

It is sheer ineptitude for you to be tear gassing your fellow citizens to protect the evil political ambitions of one man .What is the point of elections if you don't want competition?
Report to administrator
12