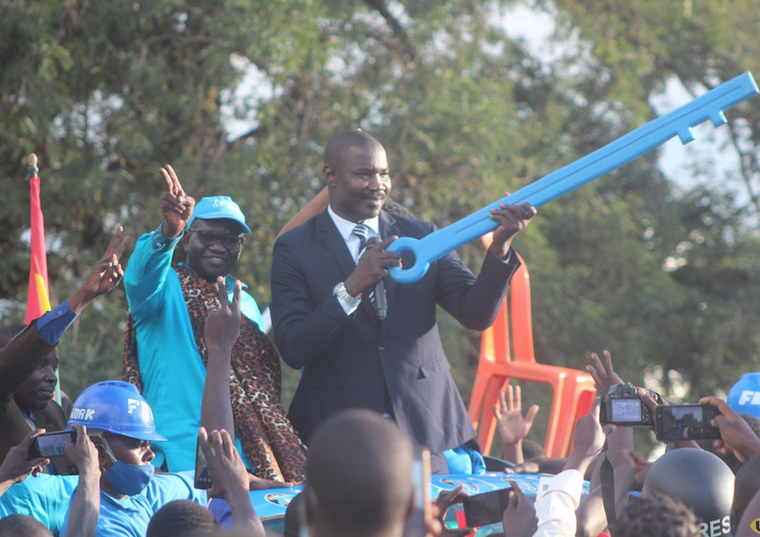 The Forum for Democratic Change (FDC) presidential candidate, Patrick Amuriat Oboi has been denied access to radio stations in Soroti.

Amuriat, who has been canvassing for votes in the Teso sub-region, says that his plans to have talk-shows on several radio stations have been frustrated. He notes that radio stations that include Etop, Delta and Kyoga Veritas where he had booked for talk shows declined to host him citing intimidation from government.

Speaking to the electorate in Kalaki town on Thursday evening, Amuriat said that he is not surprised by the conduct of government in curtailing their freedom.
"UCC [Uganda Communications Commission] said; 'Delta if you host POA, we’ll revoke your licence.' In this campaign, there is a lot of oppression and I understand, we are not surprised and we’ll continue to fight that oppression," said Amuriat.

Paul Omer, the coordinator and head of Amuriat campaign team in Teso sub region says three radio stations declined to host their candidate.
"Right from the time when Eng Patrick Oboi Amuria, the flag bearer for FDC when he came to Teso, many radios with the evidence that I have here, turned us down including Etop radio. First of all, they had given us 7-8 o'clock. Later on, I was sent a message that sorry we have been told not to host you. Secondly, we were meant to be hosted by in kind by Veritas, but Veritas turned it down said management has said Shs 3 million when actually we were going to the radio," said Omer.
Some managers from the radio stations who preferred anonymity said that the matter was beyond their hands.  However, the state minister for ICT, Peter Ogwang, who was accused of allegedly blocking Amuriat, said that he has no powers to control or stop FDC from accessing any radio station in Teso.

"It is laughable, I don't have control over management of the day to day running of each radio station in the country. To the best of my knowledge and ability, I only have UBC which UBC I don't have control over it. Two, they have their own programming which I don't interference with. If you’re the president[ial candidate] there is a procedure to how you get airtime. As ministry of Information we gave guidelines on what needs to be followed already so as far I want to categorically say that Eng. Patrick Oboi Amuriat, my brother please I am not involved nor is any minister involved or govt involved," Ogwang said.
In July, the Electoral Commission announced that persons campaigning for political offices would not be allowed to hold open-air campaigns in the wake of the COVID-19 pandemic. Instead, the commission advised aspirants to use virtual platforms including radios to reach their constituents.

Just bringing down the tribalistic system & UNITY is all that's needed, then coming out to block the demon!

Why facilitate Museveni's hold on the country formed by our tribal lands by ensuring he continues owning tax money, using police/army/us against one another, while we go with smiles on faces to legalise him through yet another fake election, in the country that belongs to him & family?

Why are Ugandans pretending the country is democracitc & another will take Museveni's place, after 35 years?

Why go for election in a fake country conquered by a migrant divided, when just being ONE PEOPLE is all that's needed?

Why are Ugandans ensuring Museveni rules for 40 years legally & what do our people expect after?
Report to administrator
+1 #2 Kabayekka 2020-11-14 05:30
So then why is FDC still supporting a National Election that is clearly not free and fair a 5th time?

Has it got to be the pocket money the tax payer gives them to continue to do their own political thing?
Report to administrator
0 #3 Akot 2020-11-14 14:03
Quoting Kabayekka:

So then why is FDC still supporting a National Election that is clearly not free and fair a 5th time?

Has it got to be the pocket money the tax payer gives them to continue to do their own political thing?

Yet, only Ugandans, in UNITY, have the power to end the stupidity going on!

How can these fake divisive opposition leaders go for election they have no right to campaign for, which of them will count the votes?

So, which fake opposition leader will win the fake election in the zone tribalistically divided & ruled, owned & controlled by Museveni?

Why are Ugandans obedient slaves of Museveni & family in the country formed by their tribal lands?
Report to administrator
+1 #4 WADADA rogers 2020-11-14 23:05
But what is this Government up to, you ask Aspirants to go for the scientific elections and then deny them access to radio stations where they are ready and willing to pay for the air time
Report to administrator
+1 #5 Nseka Mali 2020-11-15 12:23
Quoting WADADA rogers:

But what is this Government up to, you ask Aspirants to go for the scientific elections and then deny them access to radio stations where they are ready and willing to pay for the air time

...Did I hear that Ugandans would be given radios by government to facilitate the campaigns?

Who is the catastrophic fool-the Soroti radio station owners???
Report to administrator
0 #6 Akot 2020-11-15 17:46
One thing for sure; Museveni is assured of 40 years as Ugandans haven't yet understood it's only them, but in UNITY, that have the legitimacy & power to end his rule by not going for fake elections he organises, runs, controlls!

It appears Akot should prepare to congratulate Museveni this time & stop calling Ugandans who legalise him through fake elections to bring down the divisive tribalistic system & UNITE to show him way out!

The entire world will remain silent, will never blame Museveni as it's Ugandans to whom tribal lands belong who are tribalistically divided & ruled, who legalise him!

Which normal people would go divided through & through, for elections run by a demon dictator who allows no opposition?
Report to administrator
0 #7 WADADA rogers 2020-11-16 09:14
These are characteristics of a Government bidding farewell, they fear everything including their own shadows
Report to administrator
0 #8 Lakwena 2020-11-16 14:12
Am sure many NRM members are not celebrating the injustices being meted out on opposition candidates and their supporters.

It simply means; if their presidential candidate, Mr. Tibahaburwa can't compete on a level ground, he must be literally evil.

In other words, the only way for NRM party/members to give themselves a break from Dictator Mr. Tibahaburwa as life and perpetual NRM Chairman/president; and get rid of him once and for all, is to this time around vote for a favored opposition presidential candidate.

I.e., in politics 5 years is a very short time. Since they will still have the number in Parliament, but without Mr. Tibahaburwa on their backs; they will have a comeback in 2026 with a youthful and brand new presidential candidate, who has no Ugandans blood on his/her hands and move on.
Report to administrator
0 #9 Lakwena 2020-11-16 15:12
Otherwise, it is embarrassing to continue supporting and/or voting for a leader/someone who has publicly made public disclaimer that:

1. He has no friends (be his friend at own risk)

2. He is nobody's servant/employee and fighting only for himself (support/vote him at own risk).

3. He is the author and master of violence (pure evil- has no conscience).
Report to administrator
0 #10 kabinda 2020-11-17 03:56
The truth or fact is a stubborn thing. Museveni is very old and frail and increasingly desperate. Sure he still has enormous greed for power but nature is unforgiving. His contemporaries are dying or dead.

Like it or not he will soon fade away. The question these mchakamchaka enablers need to answer is what kind of country will he leave behind?

Is there a soul in NRM able to manipulate the police and army like he does and get 100% loyalty? Uganda has a time of reckoning looming in the horizon. Prepare for multiple crisis, including a constitutional military and political crisis. Watch this space.
Report to administrator