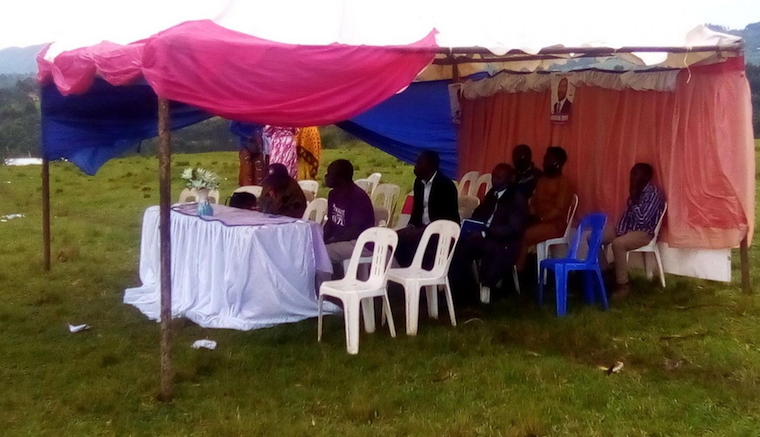 The Alliance for National Transformation (ANT) supporters in Mitooma district were left disappointed after the party presidential candidate, Gen Mugisha Muntu failed to turn up for the campaigns.

Muntu was supposed to address his supporters at Bitooma in Katenga sub-county. However, party leaders and some supporters had to wait for most of the afternoon until 6:45 pm when they left the campaign venue disappointed.

Winnie Kiiza, the outgoing Kasese Woman MP and national campaign manager of Muntu, who was at the venue refused to comment why Muntu failed to turn up for the campaign.

Kiiza only opened the ANT party offices in Mitooma town and rallied voters to support Muntu if they want a fundamental change.

Yedidia Nyakahagura, the ANT party flag bearer for MP Bushenyi Ishaka municipality, said that the rains in Ntungamo where Muntu was, could have delayed his trip to Mitooma.

“We were told that heavy rains in Ntungamo that started in the early afternoon before he had finished forced our party president from travelling and he had two other districts Rwampara and Mitooma, so he missed”. he said.

Today Friday, Muntu is expected to continue his campaign trail in the neighbouring districts of Rubirizi, Bushenyi, and Sheema.

These Spoilers have Nothing to Tell Folks as they have been Part and Parcel of the Problem!

They are All Members of The Notorious Robbers Army NRA which unleashed Death To Ugandans in Luweero disguised as a Liberation Struggle Only to End Up Looting the Country!!

They All enjoyed sanctuary and Love From Ugandans who received Them as Refugees only to Turn the Sword against Them...Why Do they think that ONLY THEM have the Mandate and Brains to Rule Uganda? NO WAY..
Report to administrator
0 #2 Kabayekka 2020-11-14 05:24
Even if this Luweero historical military gentleman missed his political appointment, his government would still pay him handsomely anyway.

These people are some of the veterans of the dodgy war of Luweero where they fought Dr Obote for messing up African democracy by rigging national elections. One wonders who is fooling who these days after 40 years now!
Report to administrator
0 #3 Lakwena 2020-11-17 16:21
In other words, Winnie Kiiza, Alice Alaso, et tal must be cringing with regret, for emotionally quitting FDC and joining a tough-talking, but perpetual loser, Gen Mugisha Muntu.

Like Gen Tibahaburwa; self-righteous Gen Muntu is another of a kind, who can't accept the facts of losing erection; during an internal democratic and transparent process.
Report to administrator