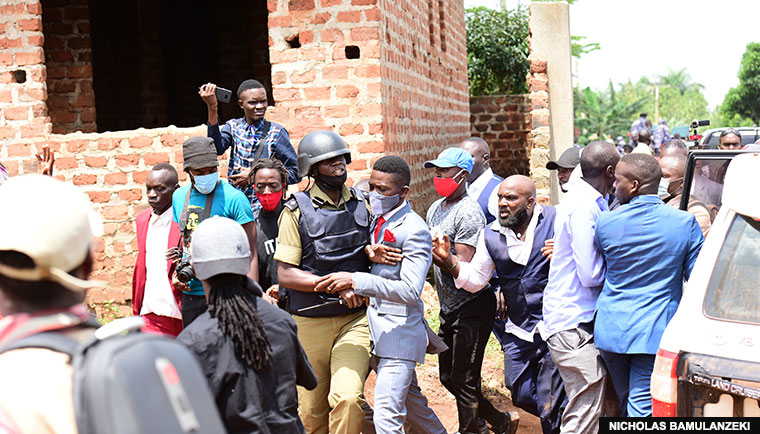 Robert Kyagulanyi restrained by police just after the nominations

For long, the EC had dismissed or watered down opposition cries of brutality by security forces but on the afternoon of November 3, Byabakama and team witnessed first-hand how the police violently arrested Kyagulanyi in a scuffle that had many of his handlers injured before he was whisked to his home in Magere, Wakiso district.

Like all the other presidential candidates, Kyagulanyi was assigned police guards that day. In a bizarre turn of events, just when he was about to leave the venue, his own guards used the double-cabin car supposed to escort him to block the way and signalled their colleagues to pounce on his car before removing him.

Kyagulanyi later noted that the very people he was smiling with a few moments earlier were the same that coordinated and participated in his arrest. He sent them away hours later, accusing them of failing their first test. The following day on November 4, Byabakama called John Baptist Nambeshe, the NUP vice president Eastern, to express his own disappointment at the actions of Kyagulanyi’s guards.

Byabakama also wondered why the guards turned into accomplices but appealed to Nambeshe to rein over Kyagulanyi to accept a new team of guards. According to an EC commissioner who preferred anonymity, it was going to be an embarrassing campaign process if one of the leading candidates did not have security and would greatly render the electoral process fraudulent in the eyes of neutrals.

“We were facing pressure from all sides to ensure that Kyagulanyi has security and many of our development partners had already expressed concern on the matter,” said the commissioner.

The Observer has learnt that several Western diplomats engaged both sides to have an amicable solution to the impasse. A top NUP official who prefers anonymity told The Observer that when Nambeshe brought Byabakama’s proposal to the party top leadership, they asked him to ask the EC boss for assurance that the new guards would not compromise Kyagulanyi’s security.

In turn, Byabakama assured Nambeshe that the new team would be professional and promised to act if NUP finds the new team unprofessional. Still, Kyagulanyi remained pessimistic about the whole idea when his NUP top brass told him about Byabakama’s proposal. He preferred to have his NUP security team but was warned that they don’t have the expertise to man his security or capacity and mandate to coordinate his campaign movement with the police and EC.

However, it drew some mixed reactions in the NUP leadership, with some members doubting whether the group was serious about taking the manifesto launch to Mbarara. On Friday when Kyagulanyi set off to Ntungamo for the burial of Dr Anas Kaliisa, a celebrated Islamic scholar, the journey was disrupted by security organs and there were some scuffles at roadblocks.

At some checkpoints, his close associates were required to identify themselves and their intention to visit Mbarara. This is how Wakayima Musoke, the NUP parliamentary candidate for Nansana Municipality, got arrested on Friday evening with a group of NUP activists who were in van carrying the party’s branding materials.

It was at this point that the NUP leadership realised they needed police security but Byabakama had already sensed this and sent a team of police guards from Kampala on Friday night to catch up with Kyagulanyi ahead of the launch of the party manifesto at Kakyeka stadium in Mbarara. Their first mission was to rescue Wakayima and other NUP supporters from Mbarara police station cells the Saturday morning.

This greatly excited the NUP leadership and the guards were eventually delivered to Kakyeeka stadium by AIGP Abas Byakagaba, the director, Counter Terrorism.

Much as the launch was characterised by running battles between the police and Kyagulanyi supporters, it was largely uninterrupted inside Kakyeeka, something that was owed to the presence of new guards, who often pleaded with their colleagues in security to be calm. It remains to be seen whether Kyagulanyi will grow to trust the new police guards but if there is anything to go by, they have passed the first test.

On Monday November 9, Kyagulanyi headed for Arua for his first campaign. As usual, the police patrols escorted him to disperse his ecstatic supporters along the roads. On many occasions, the police hurled teargas to disperse them but what encouraged his entourage is that his guards warned the police of using excessive force.

At one point in Matugga, the guards advised a police patrol car to bark off after sensing that the huge crowds could overwhelm the situation and create anarchy. By press time, Kyagulanyi was campaigning in Arua, the city that kick-started his presidential ambitions in 2018 when he was arrested and beaten up by the Special Forces Command and had his driver Yasin Kawuma murdered.

Kyagulanyi’s manifesto is focused on five points which he called the fist-five – represented by their symbol of a fist. Kyagulanyi says the ruling NRM has since 1996 been presenting manifestos that are filled with “lies, false promises and contradictions.”

He argues that NRM’s failure to transform the lives of many Ugandans is because its leadership lacks the will to improve the lives of Ugandans. He said the NUP manifesto makes promises that will be achievable.

“These are action points which we believe can and shall be achieved. Our promise to the teachers of Uganda is that we shall prioritize their welfare. Teachers must not wait for three months to be paid a salary that is not even enough to pay school fees for their own children. Teachers should be respectable citizens. Our government will ensure that teachers earn a decent salary, that they live in decent accommodation and have access to meaningful benefits when they retire,” Kyagulanyi said.

He promises to improve the working conditions and remuneration for health workers to reduce the number of health personnel that leave the country for greener pastures abroad. Picking on Museveni’s failed 2016 campaign promise of providing free sanitary pads to school girls, Kyagulanyi promised to take it up to address the high school dropout rates.

m7 end will be like that of the late Libya leader
These thugs must die.

But David, to get ahead this country needs some honesty please. Seeing is believing not ordering.

For 35 years and counting, the welfare of our men/women in uniform is deplorable and dehumanizing.

If the regime could not and cannot carry out simple maintenance and/or renovation of the existing barracks throughout the 4 corners of this country what miracle will Tibahaburwa order do overnight?

Unless of course Mr. Tibahaburwa has suddenly become God overnight. Without the long term planning, budgeting and programming, how can Tibahaburwa's decree turn all the 35-year decays and rot into heaven overnight?
Report to administrator
+2 #13 OJ 2020-11-12 12:36
iT IS THE POLICE WHO ARE FOND OF BEATING PEOPLE WHO SUFFER AND LIVE IN POOR & HORRIBLE CONDITIONS IN UGANDA .

Mr. Tibahaburwa the thug and his NRM outfit are no brainer, but a bunch of copycats. They brag of having ideology, but are violent and noisy empty tins /quote]

They own Uganda & our people are busy preparing to legalise them yet another fake election, instead of bringing down the tribalistic system & UNITING to block them, as people who want chance in the rest of the world do!

Developed world will never say a word against Museveni as long as Ugandans go along with the tribalistic system that goes against their principle!

And Ugandans are bolstering Museveni by having more opposition candidates!

Why are Ugandans afraid of living & solving their differences without Museveni around?
Report to administrator
0 #15 Akot 2020-11-12 14:42
Quoting Kirya:

m7 end will be like that of the late Libya leader

These thugs must die.

Remember, Libyans woke up to realise they MUST UNITE, if they wanted their dictator out!

What would the situation be if all the other tribes that UNITED against T. Okello/Acholi to bring in Museveni, REUNITE today against him?

Yet Museveni tribally divided tribes that UNITED to bring him to power immediately, to ensure his lifetime rule & non questioned it!

Acholi joined in to ensure Museveni's family business for ever!

Ugandans have no other choice, but to bring down the tribalistic system & UNITE to show Museveni way out, then Independent Tribal States will have to be formed immediately!

Who will ask Museveni to show his birth papers & how will he lose fake elections he organises & contols in the Uganda that belongs to him?
Report to administrator
12