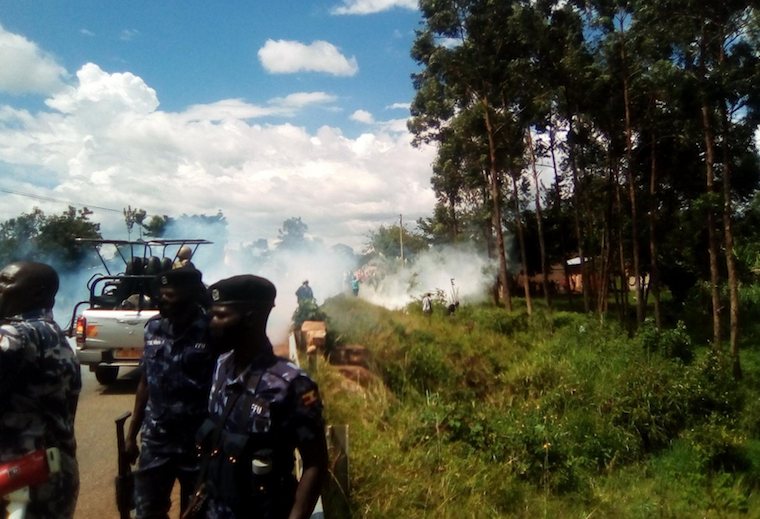 Police used teargas to disperse the supporters of the Forum for Democratic Change (FDC) party presidential candidate, Patrick Oboi Amuriat as he passed through Mbale city on his way to launch his campaign manifesto in Soroti city.

Police deployed armoured vehicles along the Mbale-Tirinyi road to block Amuriat and his supporters from passing through Mbale central business district.

However, Amuriat beat the police deployment and passed through the town via Bugwere road market through to Market Street and Bishop Wasike road before entering the city centre atop of his vehicle as he waved to dozens of FDC members lined along the streets, many of whom were donned FDC T-shirts and were seen cheering him on.

A team of officers led by the officer in charge of Mbale Central police station, Arafat Kato later forcefully escorted Amuriat up to the Mbale and Bukedea district border. In Bukedea, a group of FDC supporters who had staged at Fika Salaama welcomed Amuriat with excitement and performed several rituals for his safety. They also handed him gifts such as chicken.

This forced police officers from both Bukedea and Mbale police stations to fire tear gas to disperse the FDC members who had gathered around Amuriat’s vehicle and many others who had lined along Mbale-Sororti road to cheer their candidate.

Prior to his departure from Mbale, Amuriat told journalists that he had had a difficult day from Jinja to Mbale as police kept interrupting his journey by firing teargas at his supporters. He said they are not surprised by police’s actions, since they don’t expect them to conduct themselves differently.

The Elgon Region police spokesperson, Rogers Taitika was unavailable for comment as his known mobile numbers couldn’t go through.

why these police continues to put themselves in danger beats my understanding.

They are paid little to nothing, live in disgusting uniports and yet large amount of money is used to buy tear gas.

It would be better for most of those men to go farming instead of living in those horrible conditions and beating innocent Ugandans. I think most of them will have post traumatic syndrome in thier elderly years

Akao, that is how Mr. Tibahaburwa dehumanizes Ugandans, especially the police.

He makes them so desperate such that they can do all sorts abominable things, which no rational human being would do.
Report to administrator
12