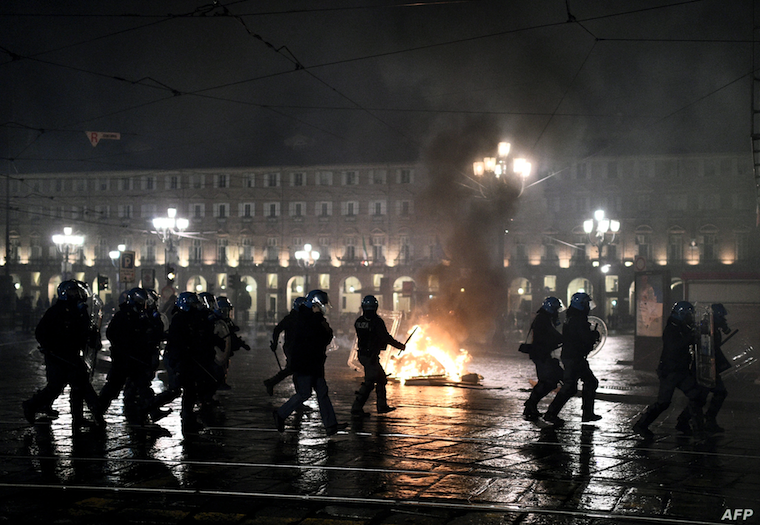 Police officers are seen in front of a garbage bin set on fire during a protest against new government restrictions to curb the spread of the coronavirus, in Turin, Italy

Violent protests erupted in more than 15 cities across Italy after the government announced new measures to rein in a second wave of COVID-19 infections. Italian leaders are rushing to stave off criticism with a financial rescue package for struggling businesses.

Angry protesters took to the streets of some of Italy’s largest cities but also smaller ones from the north to the south of the country to show their discontent with the new nationwide COVID-19 restrictions.

Prime Minister Giuseppe Conte told Italians he was well aware “this is a complex moment as this is a pandemic that is harshly challenging us, causing anger, frustration and new inequalities. Aware of how many businesses are suffering, Conte said the government had worked out a plan.

He said that compensation has already been earmarked for all those who will suffer under the new restrictions. Government officials hope the measures will be enough to quell the anger.

Italians were the first to face a widespread outbreak of the virus earlier this year and were hit with one of the world’s toughest lockdowns, which did serious damage to the country’s economy.

At the time, they complied with the government’s rules and the tough action managed to rein in the virus by the summer. This time, reactions were far from measured and it appeared not everyone in the country was ready to adhere to the government’s guidelines and rules. Far-right groups and organized crime also appear to be behind the recent clashes.

Many opposition politicians and even some members of parliament of the ruling coalition government voiced their disapproval of the tough new measures saying the already battered economy would not be able to cope. Far-right leader Matteo Salvini announced he was launching a legal challenge to the government’s decisions.

Business owners are in despair saying some will have to close forever. But some scientists say the measures adopted until November 24 still do not go far enough and that beds in intensive care units of hospitals are quickly running out.

Up for approval on Tuesday was a package of up to $6 billion to support businesses in the restaurant, sports and entertainment sectors, hard hit by the new restrictions.