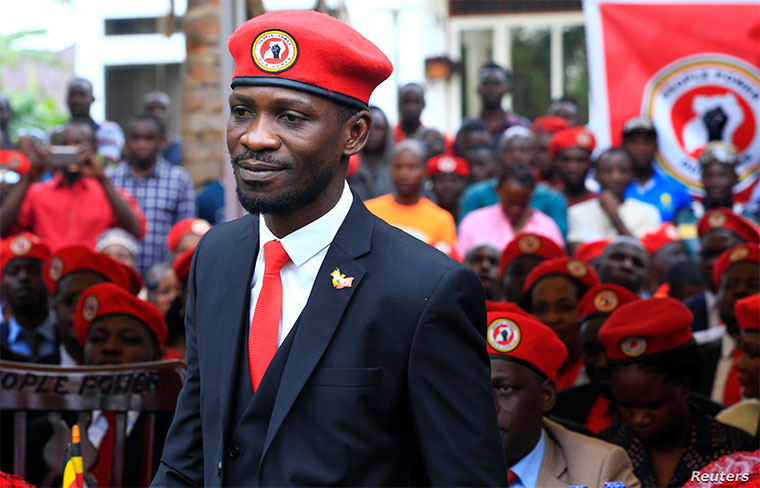 Over the weekend, Maj Gen Jim Muhwezi, an NRM CEC member representing veterans, led a team to harmonize the situation in Sembabule but if the tone and accusations of the warring parties are anything to go by, his efforts are spinning into a harder knot!

At the centre of the tug of war is one camp led by two kingmakers; Foreign Affairs minister Sam Kutesa and Lwemiyaga MP, Theodore Ssekikubo. In the heated meeting, Kutesa said all the confusion stemmed from the adoption of lining up [as opposed to voting by secret ballot], and voting without a register.

Meanwhile, Joy Kabatsi, the state minister for Transport, said she went ahead to be nominated as an independent candidate because Ssekikubo “is an adherent to the People Power group.”

She ruled out any possibility to stand down in favour of Ssekikubo and argued that her opponent subscribes to the People Power group led by Kyadondo East MP, Robert Kyagulanyi.

“I was with him in his house when he announced that he had quit NRM. He told me that he was tired, and had decided to quit. I told him that for me, I will remain and fight from within. Now that is the man you gave the NRM flag. He has been to Rwebitakuli and Mateete campaigning for Anifa Kawooya, and those areas are now [a strong base for] People Power,” Kabatsi said during the meeting.

Kabatsi, who finished a distant third in the NRM primaries, further claimed that Ssekikubo recently hosted a meeting at his farm to launch People Power campaigns. She went on to claim that Sembabule Woman MP Anifa Kawooya, her longtime rival, is working for the People Power group on the basis of her association with Ssekikubo.

However, Kabatsi’s allegation ruffled Kawooya’s feathers, who questioned the essence of the reconciliation meeting based on empty divisive claims.

“You [Muhwezi] came here for reconciliation but if someone says that because I reconciled with Ssekikubo, I am, therefore, People Power, then what are we doing here?” Kawooya retorted.

“I am the Woman MP and I know that Lwemiyaga is 96 per cent NRM. Do your research, add what these people [who stood against Ssekikubo] with what he got and go to Lwemiyaga to confirm by yourself. And if it means reconciling with anyone [be they] NRM supporters that defected to People Power, I will do it,” Kawooya said.

She instead alleged that People Power had gained a stronghold Kutesa’s Mawogola North and Mawogola South constituency currently held by a pro-Kutesa MP, Joseph Ssekabiito.

Responding to Kabatsi’s accusation that the winners of the NRM primaries bought their way to victory, Kawooya said that vote-buying is a common practice in the district.

“In Sembabule, voting is about giving. No one should complain because if I give [voters] Shs 10,000 and you give Shs 3,000, don’t complain because that is what you can afford. If I give Shs 20,000 and another person gives a kilogram of sugar, where is the difference [as far as voter bribery is concerned]? Don’t cry [because your opponent] has given more than you can afford,” Kawooya rationalized.

She also suggested that even CEC members had parted with sweeteners to be elected. She added that NRM’s biggest challenge in the district are the divisions, cliques, hatred and money.

“Right now, there is suspicion; we are suspicious of one another. There are fears that someone is funding candidates against the others,” she said, adding that this is likely to cost President Museveni.

“Much as Museveni has support in Sembabule, his forces are divided. How are the divided forces going to mobilise for him?” Muhwezi called for calm, urging the politicians to end the bickering and name calling. He also spoke against vote-buying which he said is detested by the NRM.

“The practice of vote-buying is not encouraged; it is a criminal offence like stealing chicken. What NRM allows is giving facilitation like transport, lunch and airtime, but not vote buying which is an electoral offence,” Muhwezi said.

Local leaders that spoke to The Observer intimated that the main reason for the infighting within NRM is that all protagonists are backed by powerful forces within the state security and are financially sound.

Politicians in Sembabule district have always been polarized but as NRM prepared to hold primaries, these divisions hit fever pitch and with the emergence of new players, there was a switch of allegiances with those formerly belonging to Kutesa’s camp seeking comfort in Ssekikubo’s group and the vice versa.

For instance, Kawooya was a longtime ally of Kutesa but decided to join the Ssekikubo-led camp as Kabatsi switched allegiance to Kutesa’s group. Museveni’s young brother, Godfrey Aine Kaguta (Sodo), a new entrant to Mawagola North, a constituency held by Kutesa, found peace in Ssekikubo’s camp as he took on Kutesa’s daughter, Shartsi Musherure.

Aine originally won the NRM primaries but Musherure appealed the result and the NRM election tribunal ruled in her favour. Consequently, the CEC decided that there was no time to reorganize the elections; so, both Aine and Musherure were all allowed to contest for the same seat as independent candidates.

This left the NRM without a flag bearer in Mawogola North. Elsewhere, candidates loyal to the Ssekikubo camp won the NRM primaries but the losers, dissatisfied with the way the primaries were conducted, declared themselves as independent candidates.

It is alleged that this confusion allowed opposition supporters to participate in the NRM primaries. It was observed that during the residual primary elections in Mawogola North, some of the voters that lined up wore masks bearing the People Power/National Unity Platform (NUP) insignia.

With all these confessions of voter bribery; what else can Mr. M7, the author and master of violence that he is; convince anybody/fool that he is clean, leading a clean party, winning clean elections and leading a clean country and economy?