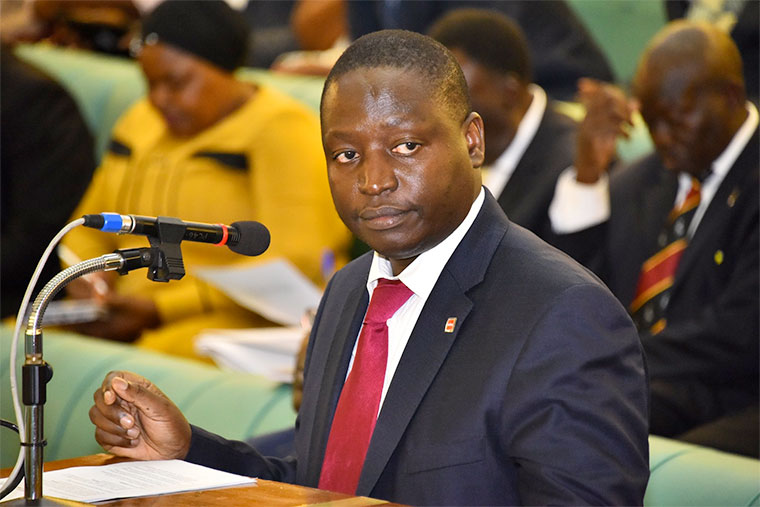 In a fresh supplementary budget request to parliament, government is seeking a total provision of Shs 353.8 billion to purchase radios for all homesteads in the country to support long distance learning and others.

David Bahati, the minister of state for Planning presented the request to parliament's Budget committee on Tuesday, saying that the supplementary schedule 3 for financial year 2020/2021 is urgent for consideration.

The request comes a few days after parliament approved a Shs 3.7 trillion supplementary schedules 1 and 2 on October 20, 2020. In his presentation to the committee, Bahati said that out of the required Shs 353.8 billion, Shs 336.86 billion is for purchase of 9 million radios to all Ugandan homesteads since it is one of the strategies to support long-distance learning, given that schools are closed due to Covid-19 pandemic except for candidate classes.

Government also needs Shs 6 billion to cater for compensation of the Archdiocese of Kampala for land at Nsambya for construction of a modern convention centre. Bahati explained that this is to facilitate partial payment for the acquisition of 20 acres of land owned by Kampala Archdiocese and occupied by Uganda police barracks at Nsambya. The land was valued at Shs 64 billion and only Shs 1.2 billion has so far been paid.

However, Amos Lugoloobi the Budget committee chairperson questioned the required funds for the Kampala Archdiocese saying that parliament had previously approved Shs 12 billion for the same church land. He directed the minister to avail a valuation report in regard to the church land as well as expenditure details of the money approved by parliament last financial year.

Rubanda East MP Henry Musasizi also questioned how the Shs 6 billion for the church land was arrived at since the total budget for the land is Shs 64 billion. Bahati pledged to appear before the committee again with more details on the matter.

Another Shs 3 billion is required by the ministry of Information, Communication, Technology and National Guidance for support to Uganda Broadcasting Corporation (UBC).

According to submitted documents, the funding will go towards preparation and participation in the forthcoming 2021 general elections given that campaigns are going to be digital, support for relevant local content development, programming and broadcasting of international and national days, special presidential initiative and development projects, public press conferences, and for Covid-19 continuous awareness creation and sensitization broadcasting programs and education programmes.

The other funding totalling Shs 5 billion is for the ministry of Finance to implement the electronic government procurement system (E-GP) which commenced in July 2020.

"It will support government to carry out complete public procurement and disposal processes electronically. The benefits of the system are promotion of bidder participation and competitiveness, real-time access to procurement information for planning, reduced cost of doing business, improved governance and accountability in public procurement, effective oversight of PPDA through online monitoring and minimal human interaction reducing avenues for corruption," said Bahati.

Under the Office of the Prime Minister, government is seeking  Shs 2 billion for funding of the Integrated Intelligence Computer System (IICS).

Bahati explained that the IICS is the output of a research that was funded from 2010 to 2014 under the presidential support to scientists to study and find solutions to some of the challenges affecting service delivery in the health sector.

"It is a comprehensive end to end system handling patient life cycle as well as other critical administrative functions of the hospital namely; human resource (medical personnel) and inventories. The system has been very successful and realized evident benefits namely; paperless experience, reduced absenteeism, efficiency in medical personnel while handling patients, improved patient experience, very significant reduction in pilferage and expiry of medicines among others," he said.

According to Bahati, the funding is needed for the introduction of biometric in-patient registration and dispensing of medicine, improvement of patient experience, linking the National Medical Stores systems and IICS systems and operational expenses including wage.

Also needed under the ministry of Foreign Affairs, Shs 1 billion is needed for the establishment of an Embassy of Uganda in Angola for security and other bilateral relations.

"Angola is a member of the International Conference on Great Lakes Region (ICGLR) that has been coordinating the fight against negative forces (ADF, M23, etc) in the region. Additionally, Angola has been a key mediator in the mending of relations between Uganda and Rwanda. Opening the mission will deepen political, trade, educational and cultural relations between the two countries," reads the document before the Budget committee.

The committee learned that the supplementary expenditure will be funded from additional borrowing of Shs 6 trillion which is currently before parliament's National Economy committee and any additional revenue.

In other words, Mr. M7/NRM came to power through violence, including robbing Commercial Banks and the Central Bank Regional Currency Centers; and nobody stopped them.

Instead of coming up with dubious budgets, and classified nonsense to hoodwink Ugandans; if they want to continue stealing, apparently nobody will stop them.

Mr. M7/NRM are "authors and masters of violence", what is the point of being smooth and soft-spoken, they way Bahati hisses and slither on the floor of Parliament like the Arch Serpent in the Garden of Edens?

There is no point. At gun-point, let them continue to openly steal, no one will stop them. Aren't they e.g. grabbing land at gunpoint, including pulling down children's schools, playground and a 40-year old Church?

It is sickening.
Report to administrator
+3 #2 WADADA rogers 2020-10-28 09:07
But what is wrong with these vultures in Government, what is the secret behind these supplementary budgets, the other day it was money to fix roads in Congo as if ours are already fixed.

Now they are asking for more money to buy radios, who needs the radios in the first place now that Ugandans have learnt to co-exist with covid 19. who procures these radios if at all and at what price.

These guys are looking for money for the NRM campaigns and they want parliament to endorse the same from the consolidated fund.
Report to administrator
+2 #3 WADADA rogers 2020-10-28 09:10
This is the price we pay for letting cannibals to take charge of the medical facilities, the mortuary and the funeral services.

you can never know who or what killed the patient before being taken to the mortuary for storage and the funeral service to bury the dead.

Some times they may deliberately kill the person in the ICU so that they secure food for temporary storage in the mortuary. They eventually eat the dead body and bury an empty coffin.
Report to administrator
+3 #4 Larry Mike 2020-10-28 09:38
Misguided priorities and lack of shame once again taking center stage.

Can we at least receive the promised free face masks? Did all the vulnerable people get their posho and beans? Some LC1 bicycles were apparently painted black and put on the market.

Indeed fools. As long as they are sucking on beer like a tit, all is good. We get exactly what we deserve.

They vote for thugs just because they're bribed with soap and paraffin. I always tell people that Uganda is a business and not a country. Political leaders are the dealers and brokers. The citizens are the ones in labor camps.
Report to administrator
+1 #8 kabinda 2020-10-29 09:23
This is outrageously ridiculous. Who said there is a Ugandan in every home who needs to be schooled?

Who said every Ugandan needs to be listening to some education programme on radio?

When did education in Uganda become compulsory anyway? This is some bold and shameless scheme to raise mchakamchaka money. It sucks and it is nothing but a stupid idea.
Report to administrator
0 #9 Mbeho Achuc 2020-10-30 13:49
When I was a boy, government bought for Ugandans radios called SOUND SOLO which were of prime quality and durable and were German made. They served their purpose very well.

The only thing I would advise Bahati ( if he can listen to wisdom) is buy the radios from a German or British company, or even an American one to ensure Ugandans get prime quality,value and not bogus supplies.

African leaders have no presence of mind and have forgotten that a country in South East Asia where Covid 19 begun, has been supplying substandard goods to Africa and likely the radios may be souced from that country!!!!

Watch this space, and a fool(corrupt thieves) may steal that money for the radios!!!!