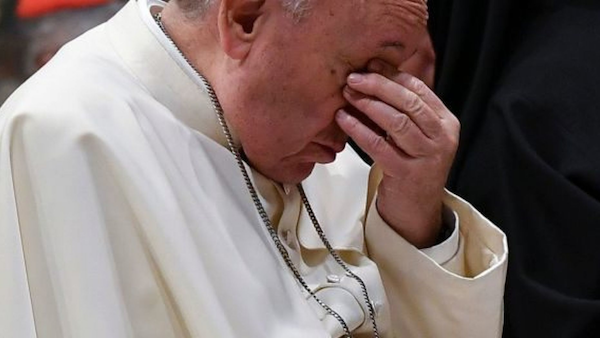 The secretary general of the Uganda Episcopal Conference, Msgr. John Baptist Laura has communicated to the Apostolic Nuncio to Uganda (Rome's ambassador to Uganda), Archbishop Luigi Bianco to have an official statement sent from the Pope's office on the matter.

Rev. Fr. Odii, told URN that for now, they can't comment on the matter.

"It is something we have not got clear, we need to know what exactly the Pope said, because normally, Rome should give a statement clarifying what the Pope said," Fr. Odii said.

International media is awash with news indicating that Pope Francis has declared support for civil unions for same-sex couples. According to CNN, the Pope made the remarks in 'Francesco', a new documentary film directed by Russian filmmaker Evgeny Afineevsky, that premiered on Wednesday at the Rome film festival.

"Homosexual people have a right to be in a family. They're children of God and have a right to a family. Nobody should be thrown out or be made miserable over it," the Pope is reported to have said in the film adding that..."What we have to create is a civil union law. That way they are legally covered."

Pope Francis has in past interviews, suggested that he is not against civil unions, but this is the first time that he has directly come out to support same-sex marriages. His comments differ from those of his predecessor, Pope Benedict XVI, who labelled same-sex marriage an intrinsic moral evil.

Both the Catholic and the Anglican Church in Uganda have in the past condemned the act of same-sex marriage saying that it is against biblical teachings.

The fight against the practice was key in the teaching of the former Archbishop of the Church of Uganda, the Most Rev. Stanley Ntagali and his predecessor Henry Luke Orombi who severally noted that they would not be intimidated to accept same-sex marriages.

“We cannot follow the teaching of the liberals of the West, which have told us the Bible is the book of the past and that men can marry men, and women can marry women. We are saying no to that liberal teaching ...we have said no to same-sex marriage and we shall continue to say that until Jesus comes back,” Archbishop Ntagali once said.

In his term of service as the Archbishop of the Church of Uganda Orombi stated that the Church of Uganda is committed to offering the gospel to those struggling with homosexuality, but upholds the biblical position on sexuality, namely that sexual intimacy is reserved for a husband and wife in a lifelong, heterosexual, monogamous marriage.

Right! Wooden K you have on previous occasions joined in discussions on homosexuality. I challenge you to deny this so that I show you evidence.

Continue to throw everyone under the bus because of your crisis.
Report to administrator
0 #52 WADADA rogers 2020-10-26 12:30
Wooden K, being a catholic or whatever you want to call it does not entitle you to defend the Pope on whatever he says, he has a personal life beyond the Vatican and if he stands out to say things in his personal capacity that would be interpreted to insinuate the same to be the position off the catholic church, some of us will have to come in and comment, it does not matter that Wooden himself is gay and is up in arms against some of us for commenting.
Report to administrator
-3 #53 Wooden K. 2020-10-26 12:41
Good afternoon Larry Mike !
I totally agree with you , YOU can`t equate homosexuality with paedophilia.

Unfortunately , this is what you imply when you write and allage ( comment #4) that prests have a fantacy with UNDERAGE BOYS.

Mu argument , which should be clear , is that peedophilia is a disease that is not confined to priest . Most paodohiles do not abuse only boys. Most child molestors are not homosexuals .

You just made my point : LGBTO advocated in UNITED STATES praised the Pope for supporting gay unions.

Now , you can`t go back and accuse me of making up stories. There is an agenda , and it has nothing do with the majority of Catholics.

BTW . the point is not that priests and church leaders should not be held to a higher standard etc , It is the selective targeting of offenders and the dishonesty behing that selectivity that bothers me.
Report to administrator
-3 #55 Wooden K. 2020-10-26 13:05
Gayman , stop weeping and get the point .
I am the least of your worries .

I you paid attention , you would find that some of my comments were adressed to Larry Mike . It is Mike who acused the Catholic Church of recognizing and legitizing an abomination , i.e. treating homosexuals with dignity.

On my part , I approached the issue intellectually and argued that the problem of sexual crimes is bigger than we are made to believe .

I would think that when I say that "the Pope is not the Catholic Church " the separation would be clear .

You Rogers Wadada was the first to comment .
You said something that someone of your intelligence shouldn`t not say .

" The Pope himself might be gay " you wrote.
This is a Pope who went inside mosques , took off his shoes and prayed with muslims . in Arabic.

Are we now going to say " the Pope might be muslim"
On his vist to Philpines , he said that prostitutes should be treated with compassion because they, too , are God`s children.
Are we going to say that the Pope is a prostutute ?

Rogers Wadada , you do not have to be catholic to be a christian.
That means that you are aware that Jusus was accused of many things - He was crusified for that
Think !
Report to administrator
-1 #57 Akot 2020-10-26 14:27
The entire world is confused, yet politicians joined now by the Pope, believe things will go on as usual!

But all we see/hear from them is more confusion, wars, homosexuality, migration & Covid-19 is being put aside!

Only China has contained Covid-19!

The Pope should be one of first to see the Bible is fulfilling & human system of rule will come to an end, but God will give second chance to those who merit it!

Yet, being homosexual, dictator, tribalists, religious extremists... is what the world is locked in!

Ah! elections are going on under fear of Covid-19, instead of leaving those in posts to ensure UNITY to fight the virus, especially when shitholes wait for donations/loans from USA/Europe so affected by the virus!