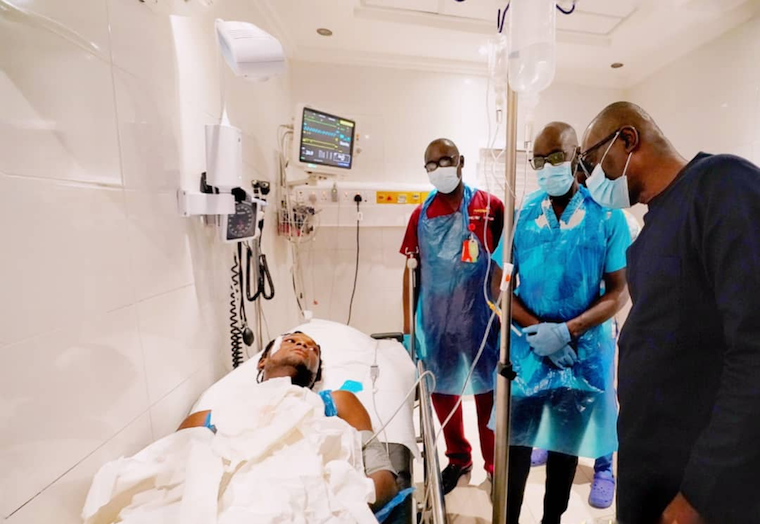 Lagos governor Babajide Sanwo-Olu visiting some of the victims

The governor of Nigeria’s Lagos state says one person has died after an incident Tuesday night in which soldiers have been accused of shooting a group of anti-police brutality protesters.

Governor Babajide Sanwo-Olu tweeted Wednesday that the person died at the city’s Reddington Hospital “due to blunt force trauma to the head,” but said it was an isolated case.” Sanwo-Olu said authorities are investigating if the person was a protester.

The governor had initially tweeted that 30 people were injured in the shooting at Lekki Toll Plaza, an upscale district in the country’s largest city and financial hub. Sanwo-Olu said 25 people were being treated for mild to moderate injuries across two hospitals, with two people in intensive care and three others treated and released.

“This is the toughest night of our lives as forces beyond our direct control have moved to make dark notes in our history,” the governor wrote in a series of tweets accompanied by photos of his visits with the victims. “I recognize the buck stops at my table and I will work with the FG (federal government) to get to the root of this unfortunate incident and stabilise all security operations to protect the lives of our residents.”

Unverified videos posted on social media by locals seem to show the army shooting directly at protestors with some seen collapsing dead. One eyewitness, Akinbosola Ogunsanya, told news outlets that soldiers pulled into the plaza and after the lights were turned off, began shooting.

Reports of the shooting came on the first night of a 24-hour curfew, imposed by Governor Sanwo-Olu, which prohibits all but essential workers and first responders from being on the streets after 4 p.m. local time. A spokesman for the governor, Gboyega Akosile, said on Twitter that the Lagos state government has ordered an investigation.

The human rights group Amnesty International issued a statement on Twitter saying there was “credible but disturbing evidence” of fatalities from the shooting at Lekki Toll Plaza.

“While we continue to investigate the killings, Amnesty International wishes to remind the authorities that under international law, security forces may only resort to the use of lethal force when strictly unavoidable to protect against imminent threat of death or serious injury.”

The Nigerian army posted a long thread on its Twitter account dismissing news reports of its role in the Lekki Toll Plaza shootings as “fake news.”

NIGERIANS SINGING THE NATIONAL ANTHEM WHILE THEY’RE BEING SHOT AT BY THE MILITARY.

WE WILL NEVER FORGET. #EndSARS pic.twitter.com/5QPWmR9RCx

The West African nation has been engulfed by two weeks of massive protests against the government’s Special Anti-Robbery Squad, commonly known as SARS. They were sparked by a video allegedly depicting a man being beaten by SARS officers. The unit has long been accused of carrying out harassment, kidnappings, extortion, torture and murder.

The demonstrations, conducted under the banner #EndSARS, led the government to disband the controversial police unit. The demonstrations, however, have persisted and turned violent as protesters demand broader changes to policing and an end to corruption.

Video taken by a stringer for VOA’s Hausa service in the city of Jos Tuesday showed angry demonstrators hurling rocks and setting fires in the middle of one street, sidewalks covered with glass from shattered windows, burned out vehicles, and uniformed and plainclothes police patrolling the streets.

“We need a new Nigeria. That is why we’re here,” protester David Danladi told VOA Hausa. “We need everything about the police to be changed.”

At least 10 people have died since protests began earlier this month.

0 #1 Akot 2020-10-25 14:33
Nigerians finally woke up but they need real National opposition leadership, if they are to have a good ending & a beginning to a different system of rule that will benefit the people!
Report to administrator