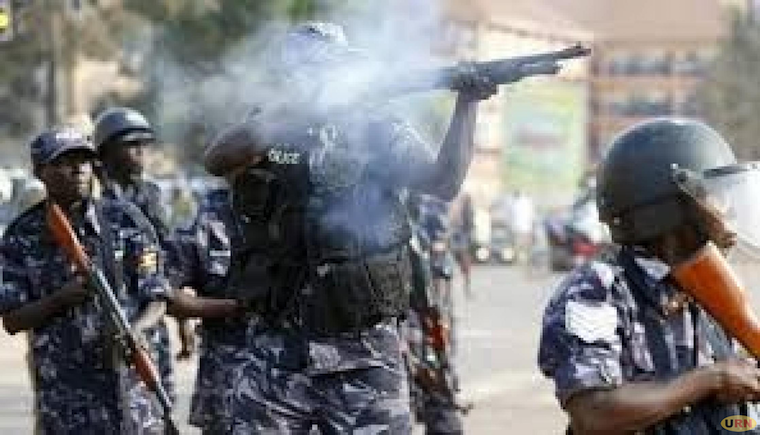 Police in Wandegeya fired teargas and live bullets this afternoon as police tried to block the National Unity Platform (NUP) party president and presidential candidate, Robert Kyagulanyi Ssentamu aka Bobi Wine and his supporters from driving to Bulange in Mengo.

Shortly after the High court dismissed with costs a petition challenging the legality of Kyagulanyi's acquisition of National Unity, Reconciliation and Development (NURP now NUP) and its leadership, Kyagulanyi set out to proceed to Mengo for a scheduled meeting with Buganda kingdom premier, Charles Peter Mayiga.

However, Kyagulanyi, who was driving in the company of his excited supporters, was cut off by heavily armed Field force Unity, Local Defense Unit and military police between Wandegeya traffic lights and around Makerere University main gate. Police attempted to stop the group from proceeding to Bulange in vain, prompting the officers to use live bullets and teargas to disperse them.

Some officers tried to drag Kyagulanyi from his vehicle at Makerere University main gate leading to a scuffle with his bodyguards. Some of the supporters joined the bodyguards to protect Kyagulanyi and overpowered the security officers who wanted to arrest him.  Kyagulanyi later managed to get his way to Bulange.

Prior to the standoff in Wandegeya, there were chaotic scenes at NUP offices in Kamwokya shortly when news came through that court had thrown out the petition that sought to overturn Kyagulanyi’s acquisition of NURP. Security blocked hundreds of NUP supporters along Kira road who wanted to access the party offices to celebrate their court victory.

Speaking to journalists, Kyagulanyi described the court case as bogus, saying it was brought by the regime to curtail NUP’s progress. He said despite their court victory, the regime had successfully disrupted their efforts, which saw over 50 NUP aspirant decide to run as independents because of the unnecessary uncertainty.

I really don`t understand why our beloved Observer is behaving like this .

I mean , the hottests news in town today is that the Court has finally put this regime in its place by dismssing that horrible case. Yet , Obsever selects tear-gassing as its breaking news ?!

Last week Museveni finally told us his real name . Yet observer chose to not treat that as "headline News"

Even the current "rapid apologies " by the Police regarding the attack on Mbogo Clan ceremony is big news . Yet Observer is busy boring us with crap headlines.

No !!!
Report to administrator
+2 #2 WADADA rogers 2020-10-21 23:39
I wonder what the police would have done if it were Museveni supporters celebrating a victory or even a mere nomination of Museveni as a Presidential candidate.

I can only cal it a selective application of the law to appease the ruling party.
Report to administrator
+3 #3 kirya 2020-10-22 09:21
Keep the pressure on. He is getting the message. He knows the guns are useless when he is unwanted
by many.

We know he does not have a birth certificate
and lacks academic papers. m7 nomination should hit the court!!
.
Report to administrator
0 #4 Akot 2020-10-22 13:44
WADADA rogers, thanks!

Museveni is making it clear it's him & him alone, the ruler & next fake election is only to legalise, officialise & constitutionalise him!

But, of course, Ugandans can bring down the tribalistic system he so cleaverly put in place & UNITE to block & force him out!

Only Ugandans, in UNITY, as ONE people & not tribally divided & ruled by Museveni, have the power to take back the coutnry formed by their tribal lands!

Ugandans MUST bring down the tribalistic system & this comes FIRST, then UNITY & coming out in FULL will block Museveni & family once & for good!

Do Ugandans want to be FREE & form he kind of governance they want without Museveni around or not?

Why are tribal leaders still in posts ensuring Museveni's post of chief tribal leader & hold on every tribe, while he owns tax money & controls every institution & not 1 tribe has a say nor can protect its people?

Why keep Museveni in post through the tribalistic system when bringing it down & UNITY will give Ugandans the POWER needed to end his rule, then Ugandans could;

Will 35 years of Museveni not be long enough & he has to rig another election, especially as Ugandans know he's the only candidate & winner?
Report to administrator