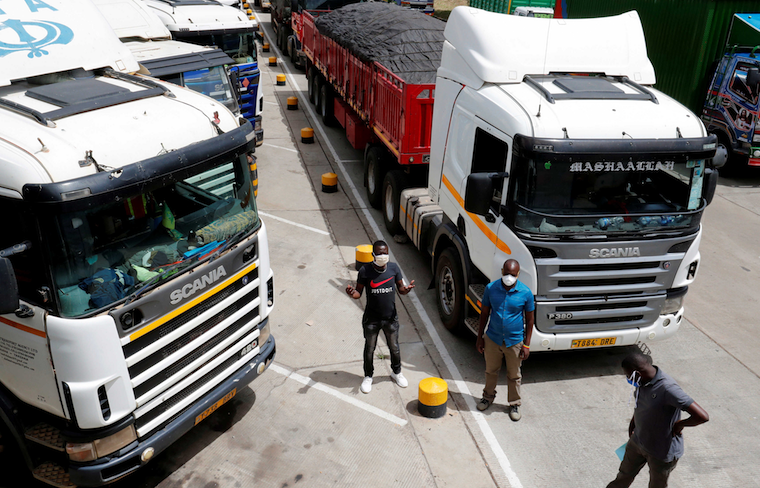 Truck drivers at the border

The East African Business Council (EABC) has called for an end to mandatory testing of truck drivers for Covid-19 at border points, saying the resulting congestion is stifling trade among the partner states.

The EABC also wants all control systems at the various crossing points harmonized, citing Uganda-Tanzania and the Rwanda-Tanzania borders, where cargo is moving almost seamlessly. Stagnant queues of trucks headed to Uganda through the Busia border currently stretch more than 15 kilometres while the traffic snarl-up to Malaba from Kenya is as long as 30 kilometres.

With about 55 trucks covering a kilometre, it implies that more than 2,400 trucks destined for Uganda are stalled at the crossing points, which is disrupting cross-border trade and costing the economy. The snarl-ups are also disrupting the flow of goods thus increasing operational costs for traders, causing wastage of volumes of perishable goods and fueling corruption cases.

But at the same time, various border points are facing a constant shortage of Covid-19 reagents and testing kits, while distressed truck drivers waiting to collect their test results are neither observing social distancing nor wearing protective masks.

A statement from the EABC says, “Testing Covid-19 at border points should come to a stop to ease congestion which is stifling cross-border trade and reducing trade volumes, just when the region is struggling to recover from the pandemic.”

Kenya’s ministry of EAC Affairs and Regional Development led a group of private sector stakeholders at the Busia One-Stop Border Post (OSBP) and Malaba OSBP, to ascertain the cause and impact of the crisis last  Thursday. They found out that most Ugandan truck drivers travel without Covid-19 certificates, planning to get tested at the Kenyan side of the border, resulting in congestion on the Ugandan side.

EABC chief executive officer Dr Peter Mutuku Mathuki says many Ugandans cross the border to test from the Kenyan side where it is free of charge, compared to Uganda which charges truck drivers 65 US dollars per test.

However, the bigger problem is on the Kenyan side with trucks entering Uganda from Kenya stalling at the border points for up to four days, waiting for testing and results for the drivers. The truck drivers were one of the categories that the government listed to pay for the test, alongside members of the public who are only seeking to know their status.

Unfortunately for the truckers, theirs is mandatory if they have to continue with the business. Their complaint that the cost is too high is yet to be addressed by the government.  They have even offered to share the cost of the test, saying the move has made the cost of doing business even higher.

Kenneth Ayebare, the chairman of Uganda Cargo Consolidators Association, says they are forced to transfer part of the cost onto the customers, making imports more expensive.

Kenyan health officials at Malaba said there is a shortage of Covid-19 reagents, which is also delaying the testing. EABC is urging East African partner states to provide adequate reagents at the border points to accommodate the testing demand.

Dr Mathuki says over the period of the pandemic so far, trade has dropped by more than half, but is worried that by the end of the year, the whole region might lose billions of dollars in economic value.

0 #1 Mbeho Achuc 2020-10-21 05:50
Testing truck drivers for Covid 19 MUST REMAIN MANDATORY..!! The drivers are known to have an affinity for especially Ugandan prostitutes and women.

Some one seems to want Ugandan people infected with China flu thru this means!!

What a stupid decision that will be!!! Malicious, ridiculous, backward and indicating low level of intelligence of proponents!!
Report to administrator
0 #2 WADADA rogers 2020-10-21 23:45
In other words, the East African Business Council is saying let the truck drivers continue spreading Covid like they did during the lock down, infact Uganda is still suffering because of these truck drivers
Report to administrator