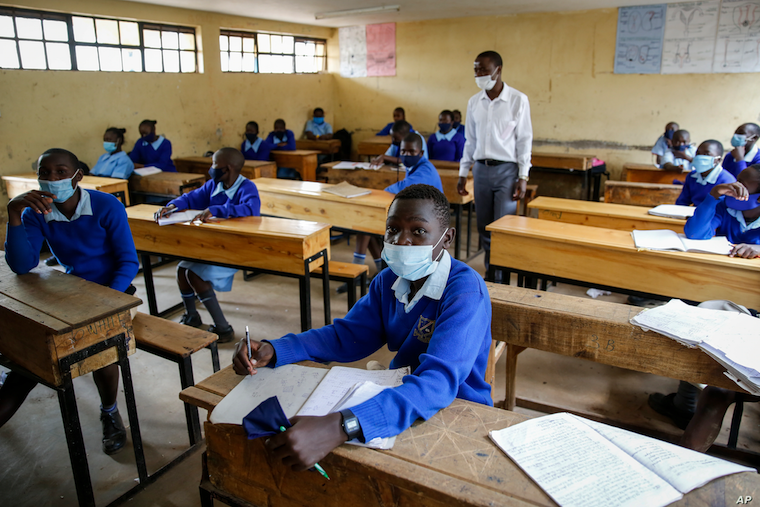 Schoolchildren attend class at the Olympic Primary School in Kibera, one of the capital Nairobi's poorest areas

Kenya is facing a second wave of coronavirus infections, just weeks after lifting tough restrictions meant to limit its spread. Kenya's Health minister on Sunday warned the country was headed for tough times after reporting more than 600 new cases and several deaths. Some experts say it might be challenging to reimpose restrictions.

In late July, Wanjohi Githae, a Kenyan journalist, was at a social gathering when he hugged a friend.

“In fact, it was not only me. It was a group of us who got sick. Social friends, so we realized that we were in a social place and someone came and hugged us. Then that individual told us that they had been tested in the office, and we don’t know what is happening,” he said.

Githae became sick and was admitted to the hospital, where he was administered oxygen to help his breathing. The journalist said that after months of the coronavirus, people have forgotten all health protocols.

“People have lowered their guard, and it's unfortunate. I think this is because the reason why people seem to be lowering their guard is we do not know who got sick. People will say they don’t know anyone who is infected, but for the few people who had someone, a family relation or a colleague, they are taking precautions,” he said.

He said health officials are worried.

“There is no doubt that we are witnessing what our modelling team this morning was calling a case of new infections. We are heading for a second wave; without doubt, we are also witnessing higher cases from prisons and other institutions across the different counties,” said Kagwe.

In recent months, Kenya pushed a nighttime curfew back to 11 pm, allowing bars and clubs to operate, and just last week partially reopened the public schools. Omu Anzala is a virology and immunology professor at the University of Nairobi. He offered his assessment on why the country faces a second wave.

“It could be a reflection of two things. There was a period of time we didn’t have testing commodities, so people saw a decrease in the number of people who were positive. But in the last two to three weeks, we got the commodities, and we are testing more, so the numbers you are seeing could be a reflection of enhanced testing. But at the same time, looking at the data critically, there is an increase in sero-positivity of COVID cases and we are now seeing COVID cases in all the counties,” he said.

Anzala, who also advises the government in combating the coronavirus, said it will be difficult to lock down the country again, but adds targeted lockdowns might be the answer.

“What we will be looking at is individual places, rather than saying we go back to restriction of movement in the entire country," he said. "We will be looking at the individual site, and where we find a spike, maybe our concentration will be there. What do we do to limit the spread of infection from that radius?”