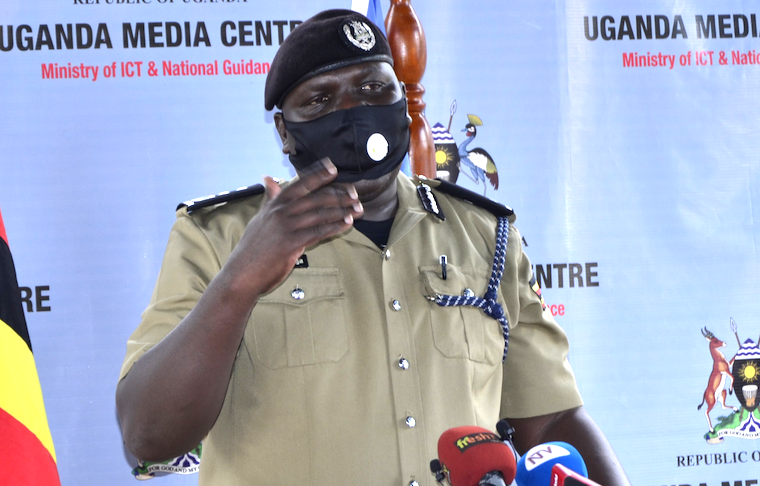 Police have in a rare outact come out to apologize to Buganda kingdom and the Catholic Church after firing tear gas at its officials during mass in Mityana.

On Saturday, police in Mityana district fired tear gas to disperse members of the Mbogo clan who had convened at their ancestral site at Mugulu, Ziggoti town council to attend thanksgiving prayers for their elder leader, Gajuule Kayiira Kasibante.

The mass was led by retired Masaka Diocesan bishop, John Baptist Kaggwa, but the function was later disrupted by police and military officers who fired tear gas to block more people from accessing the venue. In the ensuing melee, some elderly persons fainted after inhaling tear gas.

Addressing journalists at the Uganda Media Centre, police spokesman Fred Enanga said police actions were to prevent a big gathering in a bid to prevent further spread of coronavirus in the country.

Enanga said what police did was not intentional - the reason they have come out to apologize to all those who were directly impacted by the teargas including bishop Kaggwa and the cultural leaders from Buganda kingdom at large.

"It was not intentional and that is how we come to apologize to all those who were directly impacted by the tear gas; that is the Catholic Church, the retired bishop Kaggwa and members of the Mbogo clan. We call upon coordination for all forms of religious, all cultural functions should also know that such large gatherings were actually prohibited but regulated because of health and safety is the number one priority during this period," said Enanga.

He was however quick to blame politicians for the incident Mityana MP Francis Zaake and Busujju county MP David Kalwanga among others, who, he said came with a fleet of over 50 boda bodas and youth which resulted into a larger gathering in an uncontrolled setting against the ministry of Health coronavirus guidelines.

"At some stage our officers found themselves confronted by the supporters of these politicians who wanted to gain access to the venue; all other efforts to disperse them failed and the only option left was to deploy teargas," said Enanga.

He says that police had to use teargas to disperse the seemingly violent group, the same tear gas that spread to the venue where the bishop was holding the mass.

Buganda premier, Charles Peter Mayiga condemned the police actions, saying it was not wise to disperse people who were respecting the coronavirus (COVID-19) guidelines.

12
0 #11 WADADA rogers 2020-10-20 22:02
I know the Catholic Church has a tendency of wanting to forgive whoever says sorry but they have no mechanism of establishing whether or not the sorry is genuine or not.

I strongly believe the apology to both Buganda and the Catholic Church was done in the passing, it was lip service as usual because the Government fears the consequences of the two institutions choosing to retaliate.

When the Government was trying to trim the powers of Buganda Kingdom by creating small kingdoms within Buganda, the 09-09-2009 uprising gave government a bloody nose, now they fear
Report to administrator
0 #12 Jonathan 2020-10-20 23:43
Common sense must be a prerequisite for anyone who joins police force.

But the problem is that Museveni has recruited lamebrain people who can't think beyond their sordid uniports into Uganda police force.
Report to administrator
0 #13 Kasede 2020-10-21 01:31
Quoting Wilberforce Kirwana:

I always wonder whether these guys own the country, see how they pick out whom to apologize to and moreover in an elegant way.

I wonder how the so-called Enanga will look at the masses when his booses have left him behind. Does he belong to that family?

Listen you guys.. The northerners and the Rwens have had theirs.

It is your turn to harvest the mustard seeds that you sowed some 30+ years ago. You have my empathy without the usual / expected sympathy. Please enjoy the harvest while it lasts.
Report to administrator
0 #14 Lakwena 2020-10-21 08:29
Quoting ismail:

‘Killer’ Cops
When a church in a Kampala was bulldozed - the government was forced to apologise, and we see the same incident here killer cops under the pretence of Covid spread, raiding an open mass where the risk is low but the real reason-fearing popular opposition presence.

This can’t be right - the denial of basic rights enjoyed by fellow East Africans. Lord have mercy on poor Ugandans!

Ismail, it is not just killer cops. The mother of the current problem of Uganda's is: We have in our State House an Orthodox Marxist/Leninist atheist killer president nicknamed Juma Lenin (while in Darsalam University).

That is why and how he boasts of being "the Author and Master of Violence". In other words, once a Marxist, always an atheist; hence the ease of bulldozing the Ndeba Church and teargassing Bishops, and Sheiks during an open-air prayer.
Report to administrator
0 #15 Lakwena 2020-10-21 08:55
In other words, once a Marxist/Leninist, always an atheist.

Like Satan, in order to conceal theirs dark side (atheism) and be embraced by the unsuspecting Ugandans, Mr. M7 and family pretend to be religious/Christian. And they proficiently quotes the Holy Bible to the gullible Clergies and Ugandans and they nod in agreement.

Instead of them piously going to the churches; they have even succeeded in turning the State House into some sort of "Evil Temple", where they regularly invite Bishops, Sheiks, Imams etc. to conduct prayers and Mr. M7 mischievously grinds at them with disdain.

In other words, it is an irreconcilable contradiction for the family of the "author and master of violence" to be honest, religious and/or humane.
Report to administrator
12