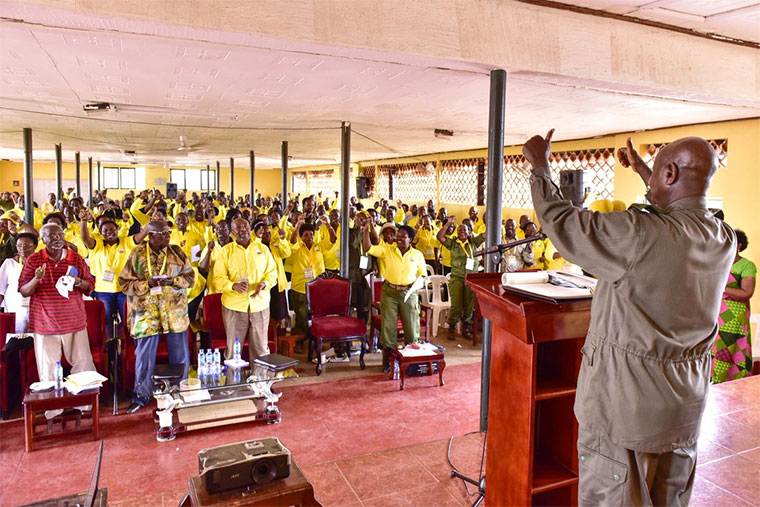 The ruling National Resistance Movement (NRM) party has already secured seats in the forthcoming 11th parliament after six of its candidates went through unopposed.

This is the second time that Hilary Lokang for Ik and Pius Wakabi for Bugahya are going through unopposed. For Gyaviira Ssemwanga, he defeated the current MP for Buyamba Amos Mandela in the NRM primaries who opted not to contest as an independent candidate. Arua district’s Lilian Paparu Obiale, Buyanja East’s Emely Kugonza, and Nakaseke North’s Enock Nyongore were new faces contesting in the recently created constituencies.

Efforts to speak to Emmanuel Dombo, the NRM’s director of information and publicity were unsuccessful. In a short message, Dombo said he couldn’t speak now because he was in a meeting.

On the other hand, Rogers Mulindwa, the spokesperson of the NRM secretariat said he couldn’t comment on the matter now before the Electoral Commission comes out with a comprehensive report about the nomination.
“Has the EC released the official list? I wouldn’t like to rely on social media,” said Mulindwa.

Six NRMs not opposed to enter Parliament as MPs, this explains why the opposition will never take power.

For five years what has the opposition been doing! Unable to field candidates. Voters time to know politicians are looking after their bellies rather than regime change.

Government gives money to every political party and share that money as salary.

They want to be mps to get cars, housing, allowances...!

If there was real opposition, it would have called an end to the tribalistic system, then to UNITY to block Museveni & force him out! But they are ensuring his 40 years in power!

Fake opposition is making Museveni even stronger as it's him who gives orders & mps comply!
Report to administrator
0 #12 Akot 2020-10-20 01:25
Quoting kabayekka:

Soon than later, the opposition will be facing to fill up 250 districts with 10 political party candidates.

Who do not agree to anything between themselves other than the money government gives them anyhow!

If they were real opposing candidates, they would never run for parliamentary seats in a country ruled & controlled by 1 man for 35 years, to ensure he rules in peace for 40 years!
Report to administrator
0 #13 Akot 2020-10-20 01:31
Quoting Apollo Ekelot:

[quote name="Pipicax"] Six NRMs not opposed to enter Parliament as MPs, this explains why the opposition will never take power.

For five years what has the opposition been doing! Unable to field candidates. Voters time to know politicians are looking after their bellies rather than regime change.

With all the hurdles placed in the way of other parties; this should be an achievement. By the way who cares if NRM gets 100%!

They run the show, skew the process, disable other players and celebrate injustice. There is a bigger goal here than just a few seats in parliament.

They are ensuring Museveni rules for life & they will be payed comfortably for it! These fake opposers are also abusing Ugandans!

Hey, I guess the drop signifies an increase in competitors!

Being fake opposing mps brings them money, cars, allowances...while they work for Museveni!