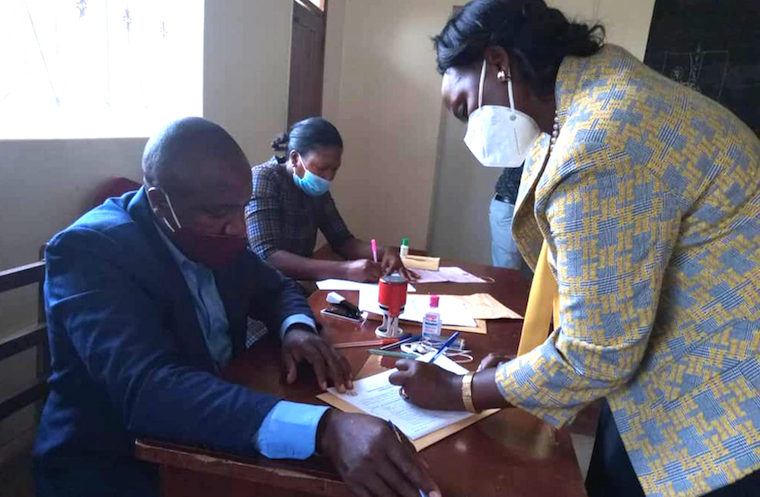 The two moneyed and powerful Museveni and Kutesa families are set to reignite their friction again as they wrestle for the Mawogola North parliamentary seat after both their candidates today got nominated as independents.

Despite the party primaries in Mawogola North being postponed twice due to heightened security tensions which led to deployments of thousands of security personnel, NRM, by the close of the official nomination day on Friday had failed to sponsor a party flagbearer.

The party Electoral Commission and authorities failed to break the stalemate between the two candidates; Sodo and Musherure. Although the NRM Electoral Commission had declared Sodo as the winner of the residual primaries conducted on September 30, Musherure contested the results, and accordingly petitioned the party elections tribunal arguing that polls were marred by gross irregularities against her.

The elections tribunal instead referred the matter to the party's Central Executive Committee (CEC) for guidance after failing to determine the actual winner. Now. Sodo has chosen a bicycle as his campaign symbol while Musherure opted for the ball.

Upon his nomination, Sodo whose candidature was seconded by the Lwemiyaga County MP Theodore Ssekikubo, said that he couldn't get enough time to challenge the tribunal decision that withdrew his flag.

Sodo castigated the party tribunal for not being independent while making their decision, arguing that they could have been compromised before making their report which they allegedly hid until the nomination date for general elections.

He vowed to continue his journey by capitalizing on the support he claimed to have obtained from within the party, insisting that he is confident of winning the general elections despite the encumbrances.

Musherure also insists that she was cheated of her victory in the party primaries, adding that she is delighted that the ticket was finally been withdrawn and she is allowed to continue with her political ambitions.

Meanwhile, Salim Kisseka who also contested in the NRM primaries for Mawogola North has also been nominated to run as an independent. He has criticised his two opponents for openly partaking in malpractices that marred the primaries.

The trio is now going to face seven more candidates vying for the same seat to replace minister Kutesa who chose to retire from elective politics.

They will never be satisfied in this world with all wealth and fame they accumulated ,they are still fighting for chicken feeds ( a parliamentary seat) in Mawogola North.
Report to administrator
+3 #3 kirya 2020-10-18 06:00
M7 and company of thugs the international community is watching and it might be the beging of the end of m7.

You fools you make us look bad. M7 focus on your votes leave the educated citizen of Uganda alone.
Uganda is not married to you.
Report to administrator
-1 #4 Kasede 2020-10-18 11:17
Quoting kirya:

M7 and company of thugs the international community is watching and it might be the beging of the end of m7.

You fools you make us look bad. M7 focus on your votes leave the educated citizen of Uganda alone.
Uganda is not married to you.

To say the least, after camping in Mawogola North to make sure the process was right; the no-nonsense, resilient and hard-working NRM EC Chairman, Dr. Odoi Tanga, has been rubbished and humiliated.

But maybe it is for the better. This is because at this rate and during the next few months up to the day of voting in Feb 2021, Ugandans will hear and witness the rot and ugliness per excellence in the NRM play out in broad-day-light.
Report to administrator