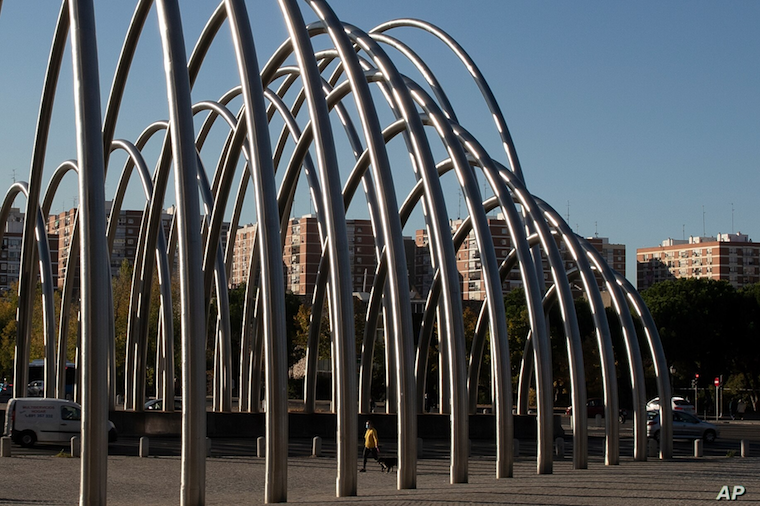 A woman wearing a face mask to protect against the spread of coronavirus walks beneath the metal Puerta de la Ilustracion urban sculpture designed by Andreu Alfaro in Madrid, Spain

Dozens of European cities have been forced into lockdown amid a surge in coronavirus infections.

Hospital intensive care units in the affected regions are filling up fast and doctors are warning that health systems could become overwhelmed as winter approaches. Europe is now reporting more daily infections than the three countries worst hit by the pandemic — the United States, Brazil, and India.

Paris, along with eight other French cities, including Rouen, Lille, St. Etienne, Lyon, Grenoble, Montpellier, Marseille and Toulouse, have been put under night-time curfew. All restaurants, bars and shops will be forced to close, and people have been told to stay at home between the hours of 9 pm and 6 am. for four weeks beginning October 17.

“Testing, alerting, protecting, this is the key to the strategy that we have to ramp up throughout November and December, because we are going to have to deal with this virus until at least the summer of 2021, all the scientists are clear,” Macron said.

Some residents of the French capital expressed alarm at the return of a partial lockdown.

“My first reaction was that it's going to be hell,” said 25-year-old Mathilde Weiss, a product manager. “I'm absolutely not going to have a social life anymore. So, I'm a little apprehensive, I admit.”

Coronavirus infections are rising exponentially in several European countries. Spain has put Madrid and eight nearby municipalities under a state of emergency, with strict limits on traveling outside the region. In Barcelona, the local government has ordered bars and restaurants to close for 15 days, with similar restrictions in force across the Netherlands.

The Spanish government has extended emergency financial support for businesses. But the economic cost across Europe is growing. The Czech Republic is among the worst-hit countries with the number of hospitalized Covid-19 patients this week reaching six times the peak seen during the first wave of the virus in the spring. The country has Europe's highest number of new coronavirus infections relative to population size.

Doctor Sterghios Moschos, a molecular biologist at Britain’s University of Northumbria, says the surge in infections in Europe likely was driven by young people returning to schools and universities in September.

“As soon as this virus is outside of those settings — meaning the family settings and therefore, by extension, the work settings as well — we’ll end up having the burden brought back onto those who are elderly, infirm or vulnerable," Moschos told VOA. "As a result of that we will see increasing hospitalizations in a matter of days."

Britain has imposed a three-tiered system of lockdowns, with the city of Liverpool in the highest tier. Doctors say more than 95 per cent of intensive care beds in the city are full.

London and several other English regions have been put on Tier 2 lockdown, restricting household mixing. The government has stopped short of calling for a so-called "circuit-breaker" two-week national lockdown, however, which some of its own scientific advisers have called for.

British Health Secretary Matt Hancock told lawmakers Thursday that the new system has to be given time to work.

“We must act to suppress it, and suppressing it through local action, in the first instance, is the best tool that we have whilst we work, of course, with the scientists and technology that can help us to do that better,” Hancock told MPs.

“It is also best for economic outcomes," Hancock added. "Because even though the restrictions, of course, have their impact, and I understand that, and I feel that, it is better than the consequences of action that would have to be taken to ensure that we keep the virus under control were it to get out of hand once again.”

“The borders between the Liverpool region and the Manchester region and London, [because of] modern transportation, are porous," Moschos said. "Unless people are literally stuck at home and not allowed to get out, so that any transmission is restricted to the homeplace, these measures are going to be half measures.”

“Time will show that we will end up in a situation that lockdown at Tier 2 is going to be inadequate and Tier 3 is not going to be adequate, and we will need to get into a lockdown like the one in March," he said. "The longer we leave it, the longer we’re going to need stronger measures to last for to contain the transmission.”

With hospitals filling up and the number of deaths increasing across Europe, scientists say the continent faces a difficult winter ahead.