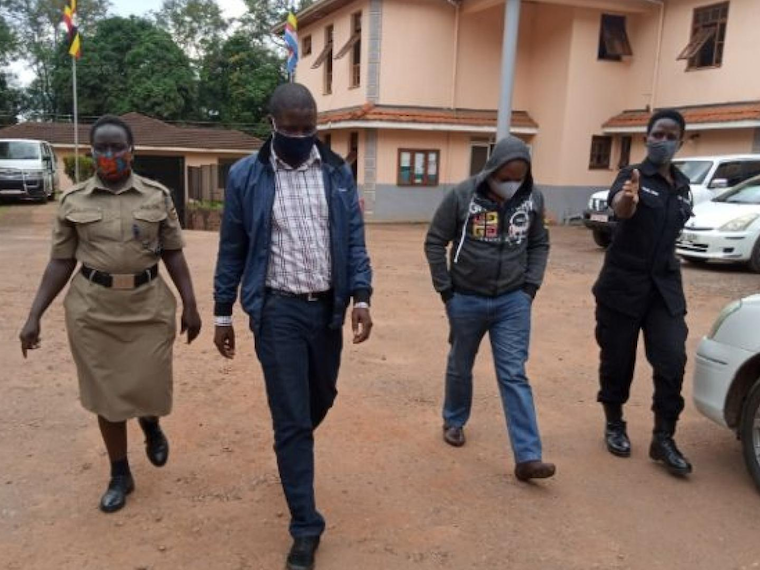 The suspects at the Anti-Corruption court

Two officials from Uganda National Bureau of Standards (UNBS) have been remanded for allegedly soliciting and receiving a bribe of Shs 3 million from Mukamanayamba factory, the manufacturer of Mukamanayamba energy drink.

Shaka Vitalis an inspector and Norman Mwamula Methwellah, a surveillance officer, all employed attached to UNBS Mbarara regional office were today Thursday arraigned before the Anti-Corruption court on two charges of corruption. The duo appeared before Grade one magistrate Moses Nabende.

Court heard that on August 6, 2020, the two officials while at Mukamanayamba factory, Kibutama branch in Kabwohe in Sheema district,  directly solicited and obtained a bribe of Shs 3 million from the factory branch manager. This was allegedly done in exchange for the officials to write a favourable report about the factory and not to close it after they had inspected it and found that its hygiene was wanting.

But the accused denied the charges and attempted to apply for bail. However, the trial magistrate Nabende couldn't entertain their application as he said he wanted to first take his children to school and time had no time.

As a result, Nabende remanded them until October 23 when they will return to court. The state attorney Miriam Acio told court that investigations were complete. According to the Criminal Investigations Department (CID) spokesperson, Charles Twine, the accused were arrested on the third time after they'd come to the factory to solicit for another bribe.

They allegedly first visited the same factory in July 2020 when found the factory's hygiene wanting and told the manager to give them Shs 10 million for them to give him a grace period of three weeks to clean up the factory properly before they write a report that would lead to its closure.

But the factory officials reportedly negotiated and they were given Shs 6 million. They came back to solicit for another bribe and on the third attempt, the director of the factory, Samuel Byaruhanga complained to police.

As a result, detectives attached to CID together with State House Anti Corruption Unit and the factory officials got Shs 3 million marked it and when the UNBS officials came to solicit for another bribe, it was given to them.

Twine added that when the UNBS officials were getting out of the factory, they were arrested and found with the monies they had used as a trap for them.

0 #1 A K Mukasa. 2020-10-15 20:58
It is on record that an independent tribunal in an independent country found that Kutesa and Tibahuburwa shared a million dollars in bribe money from a pseudo Chinese investor.

Neither has been brought to book to date. Why then pursue these individuals for asking a measly $2,700 bribe?

Is it because the victim was one of their own? He is probably from the same village as Kutesa or Tibaruhuha. This selective prosecution is simply for PR. I wonder why the media wastes time reporting it.
Report to administrator
+1 #2 WADADA rogers 2020-10-16 11:37
Oh dear, imagine this "But the accused denied the charges and attempted to apply for bail. However, the trial magistrate Nabende couldn't entertain their application as he said he wanted to first take his children to school and had no time".

What sort of country do we have when a judicial officer can give such an excuse for not doing the right thing"
Report to administrator
0 #3 kabayekka 2020-10-16 21:11
If such officials are caught red handed in corruption concerning the health of the Uganda Public, what chance has this country got when more international pandemic breaks out?
Report to administrator
+1 #4 Frank. 2020-10-17 21:10
UNBS should be at the forefront of supporting local manufacturers improve the quality of the products produced.

Not seeking for bribes to cover up poor quality products. There is no way local products will compete at regional and international level when agencies paid to ensure improvements in quality resort to killing the young manufacturing industry in the country
Report to administrator