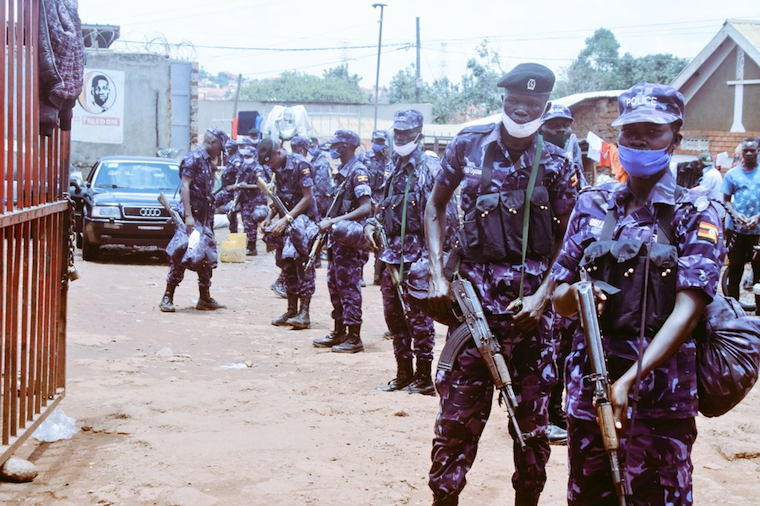 At least 82 suspects are in police custody following a joint security operation to allegedly recover police and military wear from the National Unity Platform (NUP) offices and supporters.

Yesterday, a joint security team comprising of police and the military besieged NUP head offices and several shops in different parts of Kampala where they allegedly recovered NUP branding materials including T-shirts and red berets resembling those used by the military.

The operations were conducted in Kamwokya, Makindye, Kiyembe (Luwum Street), Mulago, Bwaise and Kawempe to halt the production of unauthorized uniforms by illegal manufacturers, suppliers, distributors and sellers.

Although NUP insists that the operations were aimed at frustrating Robert Kyagulanyi’s presidential bid, security says the offices were targeted as one of the places involved in the supply and distribution of uniforms that were gazetted as a preserve of the armed forces. Kyagulanyi said the party's CCTV system had been vandalized and Shs 23 million nomination money taken by security officers.

Kampala Metropolitan police spokesperson, Patrick Onyango, says after the screening exercise, they have remained with 82 suspects locked up in police cells under different police divisions. Onyango says the charges against the suspects range from being in possession of suspected government stores and being in possession of military hardware.

On Wednesday, police spokesperson Fred Enanga, said that it is illegal for civilians to wear berets, matching outfits, insignia, camouflage fatigues and boots similar to those of armed forces.

“Wearing uniforms that are a preserve of the armed forces is illegal behavioural which was escalating especially among some political groups and celebrities. It is a usurpation of the legitimate law enforcement and military functions which is a violation of the law,” Enanga said.

He also encouraged all in possession of such items to voluntarily return them to military bases and police stations before they are picked up. Army deputy spokesperson, Lt Col Deo Akiiki dismisses claims that the operations are targeting NUP.

“We’re not segregating whether a beret is of any party colour others have gone as far as putting on a rank of a Major General some of us have not even dreamed of putting them on yet we’re in the line. But you blatantly put on and disrespect that insignia with its weight,” said Akiiki.

12
0 #11 Lakwena 2020-10-20 09:05
As above: unless Uganda is still at war with itself since 1981, or under state terrorism; why everytime and everyday, do the Uganda Police and/or UPDF have to point the deadly, automatic AK47 riffles at peaceful and unarmed Ugandans?

Just asking. Otherwise it is shameful, sickening, humiliating and disheartening to be a Ugandan under Mr. M7 and goons.
Report to administrator
0 #12 Lakwena 2020-10-20 10:37
Quoting Miki:

Military stores is defined by ownership, not resembling or likeness.

Attire resembling or looking similar to the one worn by your neighbor or anybody for that matter does not make it your own.

If the military or police are missing some stuff and supposedly stolen from their store, then the police or army would have a just cause to arrest the suspects. And by the way, an army or police force is not defined by what they wear.

Thanks Miki for that insight. Otherwise we are all being terrorized and intimidated to death.