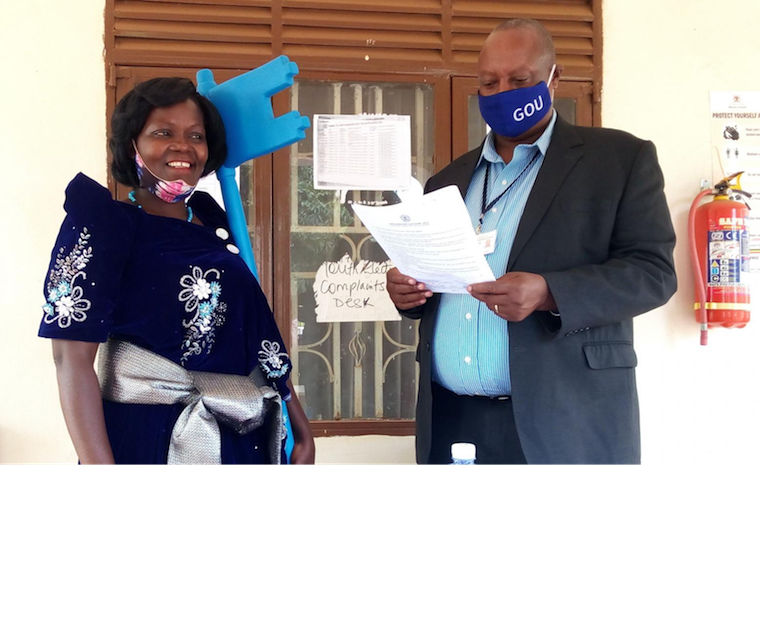 FDCs Lydia Nalukenge being nominated by the Electoral Commission in Masaka

Opposition Forum for Democratic Change (FDC) party leadership in Masaka district is contemplating forming alliances with other opposition candidates after failing to field candidates for all parliamentary positions in the area.

FDC has only managed to front two candidates out of the six parliamentary seats Masaka district - Godfrey Kayemba Afaayo, the incumbent mayor of Masaka city who has been nominated for the Kimanya-Kabonera Division parliamentary seat, and Lydia Nalunkuuma who is running from the Masaka city Woman MP seat.

Joseph Ssezonga, the FDC general secretary for Greater Masaka sub-region, says they run short of candidates who would contest on the party ticket for the available parliamentary positions in the area. He, however, says they are considering rallying behind other opposition candidates for the positions where they haven’t fielded candidates.

Ssenzoga attributes the shortage of party candidates to the growing fear among people to identify with opposition political parties.

"Yes, there are some areas where you may find that opposition has not been able to produce a candidate simply because, at times, the party in government frustrates and threatens people, and the people fear to identify themselves as candidates. At the end of the day, there will be few people because I know even when you carry there electoral boxes, they can’t come back empty which means that people are there but they fear to come out. We shall definitely join them because the whole of Uganda can’t like one party in order to win," said Ssenzoga.

However, Ssenzoga says this presents the party with an opportunity to better reorganize for the tough times ahead with a few committed people.

"What people have failed to understand is that change is not realized by many people, it can be realized by few people as long as they keep determined to do what they want, and as long as they know what they are going to do. Therefore, the fewer in fact the better because they get a bit more organized than very many people…those whoa are there and are pretending to be there, they eventually find themselves astray." Ssenzoga adds.

Bernard Mugenyi, one the FDC campaign coordinators in Masaka district, says they will identify other opposition candidates to support and eventually inform the top party leadership.

The nomination of parliamentary candidates kicked off this morning nationwide and will end tomorrow.

Any one going against NUP could find themselves in a political limbo
Report to administrator
0 #3 WADADA rogers 2020-10-16 11:45
For a party that has been taking the lion's share of the opposition vote to lack candidates to contest in certain positions speaks volumes of the future of FDC, i think this party has disappeared with the disappearance of Besigye from the political scene.

NRM is next, it cant survive without Museveni
Report to administrator
0 #4 kuku wazabanga 2020-10-16 12:24
An old party like FDC cannot even field parliamentary candidates in all constituencies of Uganda!

It means that they have failed to recruit people into their party. Why have they failed ?
Report to administrator