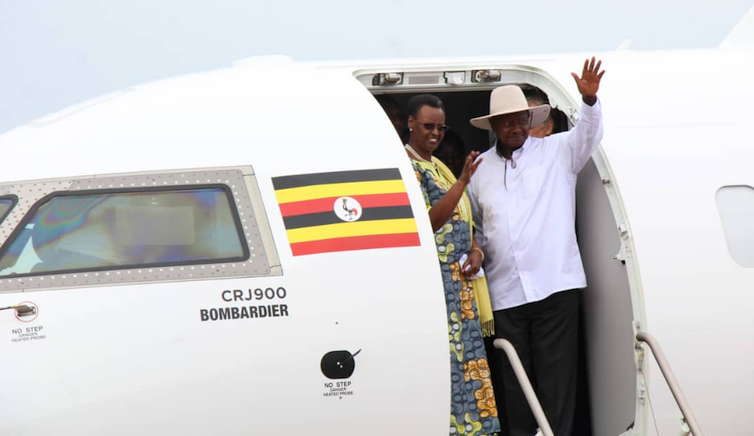 For the last six months since President Museveni imposed a lockdown to stem the spread of the Covid-19, government has so far not spent an estimated Shs 100 billion on foreign travels for ministers and other officials.

In March, President Museveni issued orders; first by banning Ugandans from traveling to countries that were most hit by the Covid-19 pandemic. Later, he completely shut down all Uganda’s borders to both incoming and outgoing travellers.

This order ordinarily put a ban on all foreign travels by government officials until recently when the president opened Entebbe International Airport.

An official on parliament’s budget committee who preferred anonymity says for the past seven months, government has saved more than Shs 100bn that would have been spent by officials on travels.

The purpose of such travels often rotates around benchmarking, conferences, medical trips as well as consultations. Oftentimes, government officials travel in delegations with many in first class or business class.

“With the lockdown on the airport, government saved about Shs 100bn since March,” the official said. However, an official at the ministry of Finance says that much of this money was already reallocated for other purposes, especially in response to the Covid-19 pandemic.

“Don’t think so much about that money because although it was passed by parliament initially, it was reallocated for other purposes relating to the fight against the pandemic,” said the official, who asked for anonymity to speak freely.

Government earmarked an aggregated foreign travel expense of Shs 167.4bn for the 2020/2021 budget across all government ministries and departments.

“When you divide this money by 12 months, it means government spends at least Shs 13.9billion in foreign travel every month,” the official said.

However, the parliamentary official noted that travel funds for the 2020/2021 are yet to be utilized. Therefore, for the past seven months that the country spent in a foreign travel lockdown, government saved roughly Shs 100 billion.

Of the 167.4 billion foreign travel fund, parliament was appropriated Shs 37.2 billion, which means that the 450 members of parliament spend 22 per cent of all travels. This figure further unearths the fact that on average, government spends Shs 82m annually on each MP for travelling abroad.

“The budget spending for the last quarter of the financial year 2019/2020 amounting to Shs 21 trillion has not happened and no accountability has been offered and all the 16 presidential addresses did not come close to explaining anything about the funds. If you include this figure, the resources earmarked for quarter one of financial year 2020/2021 that will not be spent as planned due to Covid-19 effects, the total resources available becomes 19.7billion,” Besigye said.

He called upon the government to use this non-spent money to help people deal with the economic fallout from the Covid-19 lockdown.

Other than foreign travel, the government also saved money in inland travels, workshops and conferences and organizing public celebrations.

According to estimates, government spends at least Shs 1 billion to organize public functions such as Labour Day, Heroes’ Day and Independence Day all of whom were celebrated scientifically at State House.

When I saw the headline above , I was hoping that Batte had finally collected enough guts to tackle the issue of wastage and extravagance by our Ruler.

Instead , i see Baker Batte giving us what we already have

True , its horiible what Kagada does with our money. . She buys her love by awarding her MPs with endless and useless trips abroad . At least that much we know. That is why no MP goes after her excesses Bonna bamulya mu ngalo.

What this is unknown is how musch is spent on a single Presidential flight ". landing charges , parking costs , fuel , service , allowancies for crew , etc etc.
How much is it , and why don`t get to be told is my question
Baker -------- ?
Quote | Report to administrator
+3 #2 Rwatoro 2020-10-14 15:24
Will 100bn you have saved help the public or it's for the Mafias to put in their pockets? Whether you save or not, it's not going to help any hospital or construct a road. It will end up in the wrong hands.

Why are Ugandans still waiting, looing up to Museveni, after almost 35 years in power?

What will Ugandans do when Museveni will be no more?
Quote | Report to administrator
0 #4 Kalibbala 2020-10-14 21:38
According to estimates, government spends at least Shs 1 billion to organize public functions such as Labour Day, Heroes’ Day and Independence Day all of whom were celebrated scientifically at State House...All This by a Refugee who left Nakivale camp in Tatters..

Today He is an Emperor hovering over Ugandans with utmost Violence..so far 10.000.000 have lost their Lives Since 1979..When Rutabayisirwa declared War against Uganda!!

The Country that gave him Sanctuary,Hospitality and Love!..Question :: How Much more Do you WANT???You are a Dollar Billionaire!! You either see Reason or risk Loosing ALL...Stop KILLING UGANDANS..!!WE WANT YOUR ACADEMIC PAPERS, PLACE AND BIRTH CERTIFICATE..
Quote | Report to administrator
0 #5 kabayekka 2020-10-15 08:55
Wooden you have a point over the most expensive airline African passenger.

With a mask and constantly washing his hands, this expensive air passenger can travel in a nomal public passenger plane. This will save money that can establish social welfare for the poor of this country.
Quote | Report to administrator
0 #6 WADADA rogers 2020-10-15 10:56
And yet we have lost nothing in not letting these people waste tax money on trips.
Quote | Report to administrator
0 #7 Akao 2020-10-15 21:40
The heading should be tax payers saved 100bn not govrt. The government is not ashamed to tax even poor women who sells only couple of stems of malakwang so that they can send their unless minters/MP abroad.

Now that they are bloating parliament with more MPS all that 100bn saved is nothing. Who in their right mind would come up with the ideas of youth, elder, women MPS on top of the district MPS.

Technically the district MPs are only representing men and children? In the next parliament Uganda' MPs would be more than that of US with a pop of 330m. Let's see where they will get the money to pay all the mps
Quote | Report to administrator
0 #8 kuku wazabanga 2020-10-16 12:43
It is good to learn that govt has saved that much money.

The only issue now is how the saved money will be used.
Are we going to increase the number of ICU beds in the country?

Or we are going to put it in Education where there are many challenges caused by Covid19?. Are we going to use it to improve the fire brigade which demonstrated its weakness in the Makerere Main building fire.?

We can also use it to build roads in Congo! The options are many . It is up to the rulers to decide according to their major interests. They will prioritise. Power belongs to them
Quote | Report to administrator
Refresh comments list
RSS feed for comments to this post
Add comment