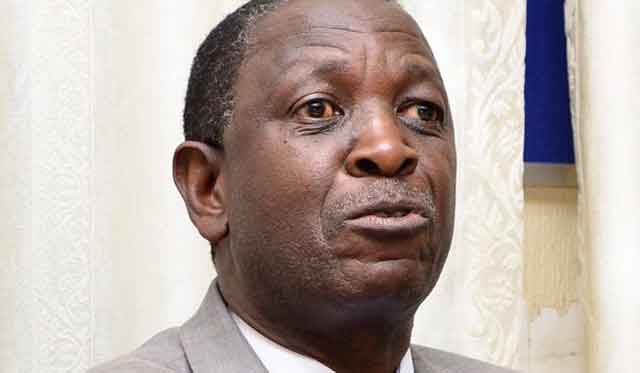 Col. Frank Bagyenda Kaka’s three year stewardship of the Internal Security Organisation came to a quick inglorious end last week. He was sacked without much warning from the president.

Arbitrarily broad daylight and night arrests or kidnaps, abductions, torture of suspects in safe houses and other strong arm tactics are just a few examples that highlighted his modus operandi.

The list of his victims and transgressions is quite long. Originally published on July 15, 2020, this article carried a definitive and comprehensive catalogue of Col. Kaka’s transgressions and list of victims.

It was published days after a Chieftaincy of Military Intelligence (CMI) night raid on safe houses in Kampala shattered Kaka’s carefully cultivated portrait of a powerful and towering boss of ISO. Below is a slightly edited version.

Before his death grip on ISO was shaken in July by the CMI night raid on his safe houses in Kampala, Col. Frank Bagyenda Kaka had successfully steered the reclusive Internal Security Organisation, ISO, on an authoritarian course, which firmly leaned on increased repression, kidnaps, abductions, torture, illegal arrests and detention of Ugandans.

In his three year stewardship of ISO, Col. Kaka was accused severally, threatened with legal action and sued for kidnaps, abductions, illegal arrests and detention of Ugandans. He also earned unflattering mainstream media headlines for all the wrong reasons since January 2017 when he was appointed ISO head replacing the reclusive Brig. Ronnie Barya.

He steadily walked ISO off-the-well-trod path of professional intelligence gathering and instead embraced unorthodox methods that included; arbitrary arrests, detentions and broad daylight kidnaps that dumbfounded even the police.

In this article, we track the bold and subtle Kaka superintended ISO actions that spilled into public view –defying the once taken-for-granted governmental norms, which ultimately triggered court orders and public outcries from lawyers, parliamentarians, journalists.

The CMI raid on safe houses last July surprised many but also signaled that Kaka had a big fight for survival on his hands with higher forces probably fed up or rattled by his methods of work. And Kaka admitted as much in a Sunday Vision interview then. He claimed he was being fought by elements within security circles opposed to his love for the truth.

“I have always stood for the truth,” he said in a brief telephone interview.

The raid also signaled that Kaka was on the brink of exiting ISO after a long trail of excesses that ultimately offended his bosses. Multiple sources said ISO had authored some reports that accused some big military big shots of working against President Museveni.

Before his ouster from police in June 2018, CMI first raided several police outfits and arrested several close aides of the then Police Chief Gen Kale Kayihura. Months later he was also arrested following a long trail of complaints against his work methods.

Could Kaka follow a similar path? His transgressions as ISO chief have been well documented. Interviews with victims and a random survey of newspaper headlines found a not-so-flattering coverage of ISO actions since January 2017. One such headline was “Lawyers criticize ISO over abductions, Monday, August 5, 2019 (Daily Monitor).

In the story, lawyers under their umbrella body, the Uganda Law Society (ULS) accused Kaka of arresting, detaining and torturing citizens and usurping the powers of other security agencies and acting outside the law.

During a media conference, ULS President, Simon Peter Kinobe, said Kaka had taken over the role of other security agencies and turned ISO into a clearing agency for wealthy individuals to the detriment of regular citizens.

“Despite the lack of statutory mandate to arrest and detain, the same (ISO) has continually detained citizens in places not gazetted by law and beyond the statutory period of 48 hours. The most notorious safe house used by ISO is in Kyengera protected by the military police under the command of the UPDF,” he said.

Kinobe then, accused ISO operatives of threatening and arresting advocates for doing their legal work, saying that any actions taken by the security agency amount to kidnap as they are illegal.

Interviewed earlier by journalists in November 2017, Kaka denied hijacking the police mandate. Kaka said ISO’s arrest of suspects accused of various crimes was not meant to usurp police roles but to render support to the sister security agency. Col Bagyenda told journalists then that security agencies cannot work in isolation when the country is facing high rates of criminality and impunity.

“ISO is not taking over the role of the police neither are we in conflict with them but we are only providing support. In this work of ending rampant criminality in Kampala Metropolitan and elsewhere, we are working with External Security Organization and the police,” Col. Kaka said then, according to a Daily Monitor report.

People then wondered why ISO, a security organ tasked with spying or intelligence work, was arresting suspects, a role supposed to be handled by Police. Such concerns increased after ISO and police clashed over which of the two agencies should secure the home of Christine Mbabazi, an alleged former girlfriend of slain former police spokesperson Andrew Felix Kaweesi.

“Police work in Uganda is intelligence led and that is what we do. But if we arrest suspects we hand them over to the police for onward management because we do not have cells. But there is no conflict with the police at all,” Kaka said, according to a Daily Monitor report.

On camera and in broad daylight, MPs on the Human Rights Committee were denied access to ‘safe houses’ in Nkokonjeru, Kyengera and Nalukolongo.

Led by the committee chairperson Janepher Egunyu Nantume, the MPs were stopped at the gate. One soldier, Vincent Kalibala, the in-charge of the Kyengera facility, told MPs they could only be granted access by Kaka.

“It’s unfortunate that we cannot be allowed to access this facility in an effort to exercise our mandate. We are going to discuss as a committee on the way forward,” said Nantume.

At another facility in Nalukolongo, UPDF officers and Local Defense Unit (LDU) personnel stopped the MPs from entering. They urged the lawmakers to seek permission from Major Sulait at Nateete police station. Interviewed then, some people in Nalukolongo said the facility is always under tight security. Two residents claimed a timber seller identified as Yiga was tortured to death at the facility.

At Kyengera residents said they were barred from standing near the premises.

“We stay around here but the army officers never allow us to get close to the gate. We only see soldiers entering and coming out and sometimes we hear cries for help from inside,” said one of the residents.

Speaker of parliament Rebecca Kadaga directed the parliamentary Human Rights Committee to investigate the alleged presence of safe houses in Lwamayuba and Kyengera and torture of Ugandans. The directive followed concerns raised by MP Ssebaggala and his Arua Municipality counterpart, Kassiano Ezati Wadri. The two claimed Ugandans were being tortured in ungazetted places.

Ssebaggala claimed that after picking suspects, ISO takes them to Katabi in Entebbe and loads them onto canoes and boats enroute to Lwamayuba on Kalangala Island. Equally, Wadri reported a case of kidnap and rights violation. He claimed Jamila Asha Atim, a records clerk at Arua regional referral hospital was kidnapped by men in a white vehicle on April 17, 2019.

“As relatives went further to try and find out from other security agencies, it was later discovered that Atim is being detained in a Kyengera safe house along Kampala-Masaka road. In this same safe house people have undergone horrendous torture, they are given one meal in four days,” said Kassiano.

Several people have in the past been grabbed off streets by gun wielding men in broad daylight. And one such person was New Vision crime reporter, Charles Etukuri. The kidnap grabbed media headlines including; “Court orders ISO to produce Etukuri dead or alive February 18, 2018 (URN).

After the journalist went missing for days, High court ordered Kaka to produce Etukuri in court dead or alive. The order made by deputy registrar of the High court Civil Division, Alex Kauju followed an application for a habeas corpus filed by the New Vision legal department backed with an affidavit sworn by Jimmy Ariko, an employee of New Vision following the kidnap of Etukuri.

Etukuri was allegedly picked by ISO operatives for writing about the death of a Finish national at Pearl of Africa hotel commonly known as Aya.

In its application, New Vision claimed that ISO had been holding their employee incommunicado. Interviewed then Kaka, “…declined to confirm or deny whether they are holding the journalist.

Etukuri was reportedly kidnapped by five men in a Toyota Double Cabin vehicle registration number UAH 038A, outside the New Vision premises in Industrial Area.

In a miscellaneous application 671 of 2019 filed on October 2, in the High court in Kampala, Kampaire through her lawyers of M/S Masereka & Co. Advocates, sought a declaration that Kaka, the director general of ISO, was in contempt of court for refusing, ignoring and failing to implement an earlier High court order directing him to release Nsangiranabo from illegal detention.

Nsangiranabo was arrested and detained at an ISO-run safe house in Kalangala district on Lake Victoria.

On July 31 2019, High court judge Musa Ssekaana issued orders directing the Attorney General and Col.Frank Kaka to immediately release Nsangiranabo after they failed to comply with a habeas corpus order issued by the same court on July 25.

“Despite serving the respondents with the court order, the respondents have not only refused and ignored to comply but also contemptuously continue to disregard the orders and authority of this court. The applicant has not received any reason from the first respondent to justify the failure to comply with orders and there is no order of stay, precluding compliance with the said orders of court,” Kampaire’s application read in part.

12
+1 #11 Lakwena 2020-10-15 11:25
In other words, even Gen Mugisha Muntu is a haunted man. Otherwise,why was it so easy for Muntu to retire, yet up to now past retirement age, Gen Tinyejusa is held at ransom by Gen Tibaruharwa whatever?

Whenever Mr. M7's directed (order from above) state terrorism gets out of control and/or indefensible, Foxy M7 will always drop whoever the executioner, hatchet-man/woman.

E.g., in 2005; when the then CID Director, Afande Elizabeth Kuteesa' embarrassing and irredeemable trumped up rape and treason charges against Dr. Kiiza Besigye could not stand; Mr. M7 relocated Elizabeth Kutees and she got deployed somewhere under the UN Mission somewhere in Dafor, wherever.

When gen Kayihura finally goofed, as they say the rest is history.
Quote | Report to administrator
12
Refresh comments list
RSS feed for comments to this post
Add comment