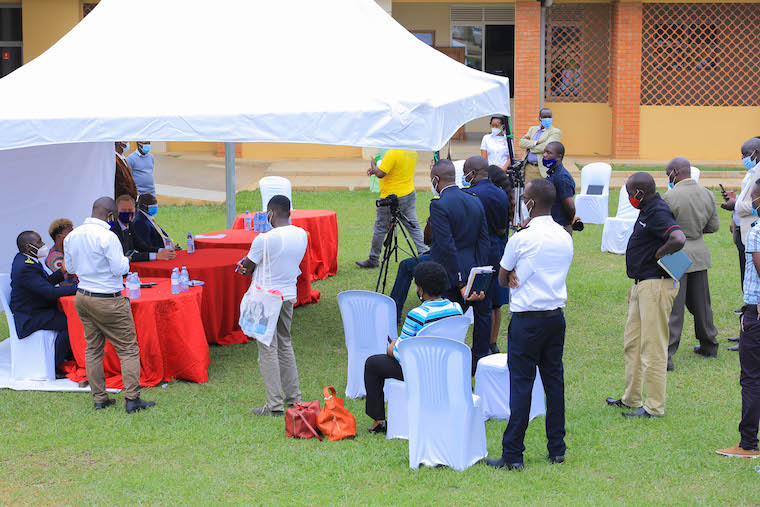 The ministry of Health has revealed that at least 50 journalists in Uganda have so far tested positive of the coronavirus (COVID-19).

According to ministry of Health statistics, 9,442 persons have tested positive and 85 died of COVID-19 in Uganda as of October 7. Speaking to journalists at a virtual media symposium on the COVID-19 pandemic in Uganda organized by the African Centre for Media Excellence (ACME), Dr Charles Olaro, the director of curative services at the ministry of Health revealed that at least 50 journalists have tested positive of the virus representing close to 0.6% of total cases.

Dr Olaro didn’t reveal the media houses or areas where the journalists have been registered but noted that the numbers have been aggregated from the persons who indicated journalism as their classifications during testing.

He explained that some of the journalists could have contracted the disease because of the nature of their work. The symposium was intended to deepen the knowledge of journalists on COVID-19, the response of the scientific community, and the general state of play in Uganda.

Dr Peter G. Mwesige, the executive director of ACME said he was struck by the revelation and asked the journalists to mind about their safety as they go around their work.

Emmanuel Ainebyoona, the spokesperson of ministry of Health said many of the journalists who were found positive are still on treatment and recovering from the virus.

He, however, noted despite the fact that journalists were at the forefront on spreading information about the prevention against the virus, many were not observing the standard operating procedures during press conferences and other interactions with various people in the early stages of the pandemic which could have contributed to the infections.

Ainebyoona noted that there has been an improvement with many journalists now wearing masks, sanitizing daily and embracing use of microphones mounted on stands so as to observe social distancing with news sources who could expose them to infection.

Mohammed Ssendegeya, the vice chairperson of Uganda Journalists Association for Buganda region says that the number of positive journalists could be higher because few have tested yet they are at high risk while covering the pandemic.

Ssendegeya said many journalists are in field reporting but they are ill-equipped to prevent themselves from contracting the virus. Unlike in Kampala city where media houses have offered free masks to staff and installed sanitizing equipment at offices, the upcountry journalists are on their own which may expose them to the COVID-19 pandemic. He also said there is laxity among journalists who cover events upcountry and this could expose them to COVID-19.

Herbert Kamoga, the secretary general of Greater Luwero Journalists' Association says that although COVID-19 is spreading so fast, several journalists in the area are not observing SOPs.

Kamoga explains many journalists still interview people without wearing masks and some can’t afford to buy sanitizers daily to protect themselves.

“Each personal handheld sanitizer costs about Shs 5,000 and you may need at least four per month which upcountry journalists can’t afford over low pay,” noted Kamoga.

Samuel Kaweesi, a presenter at UBC in Buruuli Nakasongola said apart from exposure in their line of duty, several journalists are part of the community which have also dropped the SOPS which may expose them to infections.

Kaweesi added that journalists who are upcountry have been neglected by district task forces on COVID-19 and there was need to sensitise them on protection like the health workers.

Some of the media houses that have registered the highest COVID-19 cases are Radio Pacis, Vision Group, Nation Media, BBS TV and Uganda Broadcasting Corporation among others.

The most affected are UBC where at least 10 of its staff tested positive of COVID-19 forcing the station to reduce access to its Kampala office for both staff and members of the public. At least 10 other journalists also tested positive at Radio Pacis.

0 #1 Lakwena 2020-10-13 08:55
In other words, many Ugandans, especially those in and around Kampala, whose sources of incognito infections were from returning foreign travelers; must have contracted the Covid-19 multiple times, and even healed without knowing.

We just have to thank God the we find ourselves and live in a warm, dandy and perfect environment.

Otherwise I am not surprised or terrified if any of my body discomfort, ache, etc.turns out to be Covid-19 and 20.
Report to administrator