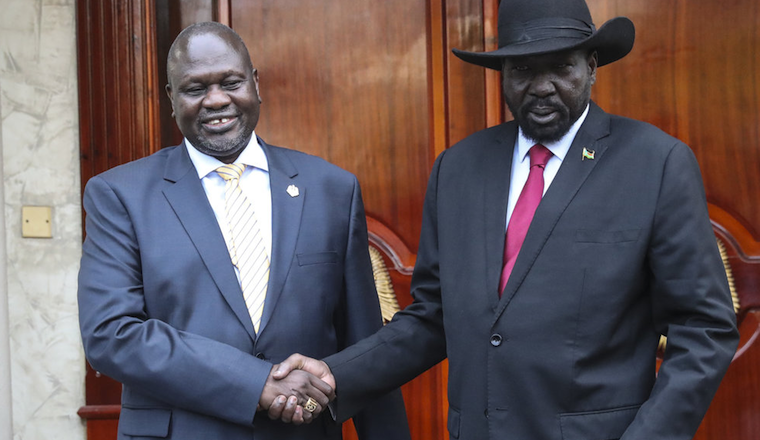 The UN Commission on Human Rights in South Sudan unearthed the misappropriation of a staggering $36 million since 2016 in the world's youngest and fragile nation.

Most of the embezzlement by senior politicians and government officials with the aid of unnamed international corporations and multinational banks occurred in the ministry of Finance and Economic Planning and the National Revenue Authority. South Sudan’s National Revenue Authority in a recent report to parliament, indicated that over $300 million has gone missing in the last 3 months.

In a September 24 statement, Yasmin Sooka chair of the UN Commission on Human Rights in South Sudan to the Human Rights Council said the looting and pillage in South Sudan are not just offshoots of the war but might actually be the drivers of the conflict.

Below is Sooka's statement in full...

Good morning, Mme. President, Members of the Council. I have the pleasure of updating the Council this morning with my colleagues Andrew Clapham and Barney Afako.

South Sudan is a country where lives are being destroyed by financial corruption on an epic scale. Looting and pillage aren’t just offshoots of war – they are arguably the main drivers of the conflict.

At one end of the spectrum, South Sudan’s political elites are fighting for control of the country’s oil and mineral resources, in the process stealing their people’s future. At the other, the soldiers in this conflict over resources are offered the chance to abduct and rape women in lieu of salaries. The eight-year-old girl gang raped in front of her parents is the collateral damage.

The most recent Social Progress Index report looks1 at the well-being of a society rather than GDP, measuring basic physical needs for life like food and shelter, essential services like health and education, as well as access to fundamental freedoms. South Sudan is almost at the bottom of the global list. To a large extent this is because of the conflict that South Sudan’s elites have imposed on the country. But it’s also a result of the mismanagement of resources.

Our Commission has uncovered brazen embezzlement by senior politicians and Government officials, together with a number of entities linked to the Government. We can reveal the misappropriation of a staggering $36 million US dollars since 2016. It is worth noting this is just what we were able to trace and may not reflect the whole picture.

These represent illicit financial flows from the ministry of Finance and Economic Planning and the National Revenue Authority. Shockingly, these South Sudanese bodies have been aided and abetted in these crimes by a number of international corporations and multinational banks. Some of this money has been laundered through the purchase of properties abroad. Indeed those properties may well be in your countries.

This should be of grave concern to the Unity Government, the Intergovernmental Authority on Development (IGAD), and the African Union, as well as international donors to South Sudan.

The result is South Sudan’s oil dependent economy is struggling, unable to compensate for the loss in revenue. To give a flavour of what’s going on – a recent report to parliament by South Sudan’s National Revenue Authority indicates that approximately $300 million US dollars have been “lost” in the last three months alone, while the Economic Crisis Management Committee reported that $3.1 million US dollars was “missing” at the Directorate of Nationalities, Passport, and Immigration.

Battered by conflict and corruption, South Sudan has now simply run out of foreign exchange and is unable to prevent the depreciation of their pound. The situation is compounded by the system of dual exchange rates which is abused by political elites who access hard currency at discounted rates, while hyperinflation and the COVID-19 pandemic have deepened poverty for the civilian population. The black-market inflation rates have reached 20+ per cent in just two months.

Layered on top of crisis after crisis comes the COVID-19 pandemic, exposing the structural inequalities that have remained unaddressed for decades. If restrictions on the importation of food continue, and food prices continue to shoot up, there is a possibility of food-related riots or other forms of social unrest.

Madame President, every year I find myself talking about the Revitalised Peace Agreement. But let’s be honest – it’s far from revitalised. Implementation of key areas has stalled, particularly around security sector reform. While the COVID-19 pandemic can take some of the blame, the lack of progress poses a threat to the peace process. This is clear in the escalation in violence in Central Equatoria, Jonglei, Lakes, Unity, Western Bahr el-Ghazal, and Warrap States, and the Greater Pibor Administrative Area. A breakdown in the ceasefire with armed groups in the Equatorias has fuelled the violence and already displaced thousands of South Sudanese civilians.

In this internecine situation, tearing communities apart and fuelling ethnic and religious hatred, women and girls remain the major casualties. The lack of accountability for the serious international crimes being committed demands the attention of Member States of this Council. The African Union and IGAD urgently need to ensure Chapter V of the Revitalised Peace Agreement is implemented and ensure the necessary legislation for establishing the Hybrid Court and the Commission on Truth, Reconciliation, and Healing is enacted, so that the full range of transitional justice measures can be realised. Without this, the cycle of destruction and impunity will not be broken.

After a two-year delay, South Sudan’s leaders finally formed the Unity Government provided for in the Revitalised Peace Agreement. The impasse around the allocation of states and the appointment of State Governors has largely been resolved. However this has been at the cost of women. The Commission notes the spectacular failure of the Unity Government to appoint more women to positions in Government in compliance with the 35 per cent quota set out in the Revitalized Peace agreement. Only a single woman nominated by the SPLM/A-1O has been appointed as a Governor, which violates a key provision of the Peace Agreement to increase the participation of women in government. South Sudanese women are rightly furious about this betrayal.

Madam President, there is a reason for the gender quota – sexual and gender-based violence in South Sudan is extraordinarily high, a situation that has also been exacerbated by the COVID-19 pandemic. Lockdown restrictions, while necessary, also created an environment in which violence against women thrived, including the heinous crimes of sexual slavery, the abduction of women, and the trafficking and sale of children including girls. The Commission received credible reports of the abduction and sale of children in the course of cattle raids in Jonglei State.

Sexual and gender-based violence against women and girls of all ages in South Sudan is relentless. The on-going conflicts in places like Central Equatoria, Jonglei, Lakes, Unity, Western Bahr el-Ghazal, and Warrap States have seen abductions of women and girls who are either forced into marriage or become sexual slaves. Young men are recruited to fight on the basis that they are free to kidnap women and girls in forced marriage or as sexual slaves. In a country where the bride price is exorbitant in terms of cattle, the freedom to abduct young girls and force them into marriage is a terrible incentive to commit abduction and rape with no fear of consequences.

We heard credible reports of girl children as young as eight years old suffering multiple forms of rape and sexual violence. In many cases the parents and family members have been forced to watch as they are gang raped by multiple perpetrators.

While some initiatives try to provide psychosocial support to survivors, the sheer scale of the need is overwhelming for those trying to help. The Commission was told that this a war against women and girls and their bodies. It is fuelled by plunder – the proceeds of which are in your capitals. It’s time you seized these assets and returned them to the victims. But ensuring South Sudan establishes the Hybrid Court is the only way to end this crisis definitively. The eight-year-old victim needs to grow up in a world where the men who raped her will be prosecuted.

0 #1 Larry Mike 2020-09-27 15:44
Is it a surprise anymore anywhere? It's all about survival and it means accumulating as much wealth as quickly as possible and through any means available. T

It's like all the men who rule African countries are bewitched or something. All they think about is themselves and a few people in their circle. Africa seems to be a cursed continent!
Report to administrator
0 #5 Wainanchi 2020-09-28 08:18
@Lary Mike..The Bible teaches us not to steal and kill.

Every country needs to have plans how to cater for its population and engages them in productive work which will culminate with rewards Why there is no corruption and only little crime in developed countries Africa and all African countries as Uganda is doing should plan for their people and skill them.

South Sudan is a oil rich and minerals rich country and it only needs good planning and governance linked with good judicils system.

Only excuse is that it is revoverning from civil warband we hope today's united leadership will organize the country and move forward like Uganda.
Report to administrator
0 #6 kabayekka 2020-09-28 09:42
North Sudan would have the last laugh over this mess.

But look closely at its own future. One cannot blame all this to the buyers of Sudan's Crude Oil?
Report to administrator
0 #7 Odongo Richard Otim 2020-09-28 15:03
Some leaders of South Sudan aren't patriotic, because they live like thieves, and one just wait for any chance that appeare to them.

They love expensive drinks,prositutes,luxury cars for their enjoyments in Big Hotels and Restaurant.

All stolen assets can be recovered these days. Nothing to worry about.

Lysol, that is impossible on this rotten continent that is a spectacle but also nightmare of thieves!

Such corrupt officials should be blocked from Western Countries!!!

African thieves need to leave their evil ways, of stealing and Africa can develop!!!
Bannange tuswaala!! Africa is getting its huge share of shame!!!
Report to administrator