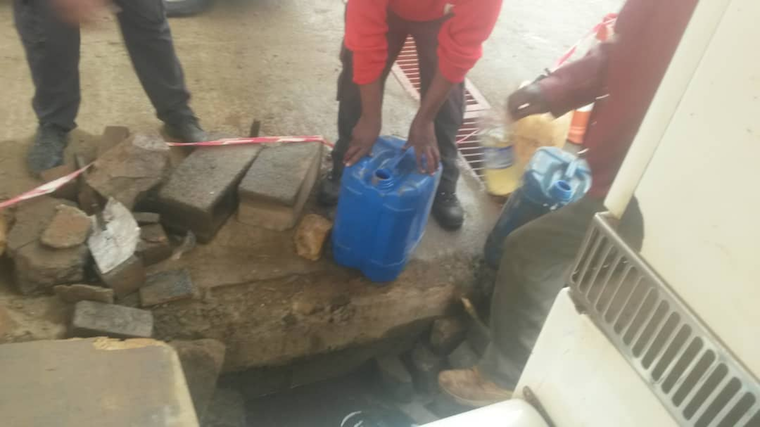 On September 25, workers at the station, which is under renovation, discovered leakages of diesel emanating from the ground and upon excavation of the place, it was established that a diesel pipe was leaking, causing the fuel to mix with water system underground.

According to a worker who preferred anonymity, they drained several jerrycans of contaminated diesel to dispose of.

“To our shock, the station owner, a one Sunilkumar Shingala, ordered us to pour it back into the main tank,” said a female worker.

According to the worker, the Total franchise operating procedures prohibit the act of adding fuel to the main tank if it is not done by their trucks.

“This not only lowers the standard of fuel but also endangers cars of clients who buy fuel from the station,” she said. “We are worried because several people who took diesel have returned complaining about engine faults.”

When The Observer visited the scene, some traces of diesel could be seen spilling over in the trenches of the road leading to Kalerwe. On his part, Shingala denied the allegations but told The Observer that anyone with a grievance should address it to him at the station.

When The Observer reached out to the area retail sales manager, she promised to send the number of the person in charge but by press time, she had not done so. Meanwhile, the Total regional sales manager declined to comment on the matter because he is not authorised to speak for the company.

0 #1 mixixi 2020-09-27 12:21
Dear Observer thanks much for alerting us about this fake muyindi at total kalerwe.
Report to administrator
0 #2 WADADA rogers 2020-09-27 20:28
We still had some hope in total and shall but just a few months ago, a shell petrol station was found selling fuel contaminated with water.

While the rest of the of the stations sell adulterated fuel mixed with thinner and parafin, its the price we pay for living in a third world country
Report to administrator
0 #3 Kidde Abel 2020-09-28 08:19
Isnt this the same prorietor of of the next Total fuel station ?
Report to administrator
0 #4 kabayekka 2020-09-29 06:06
One is of the understanding that there is the office of standard for all the products the consumers suffers to purchase in this country.

The workers should not suffer this sort of mismanagement. It is a question of these officials moving about in these stations everytime to check on the quality of these products!
Report to administrator