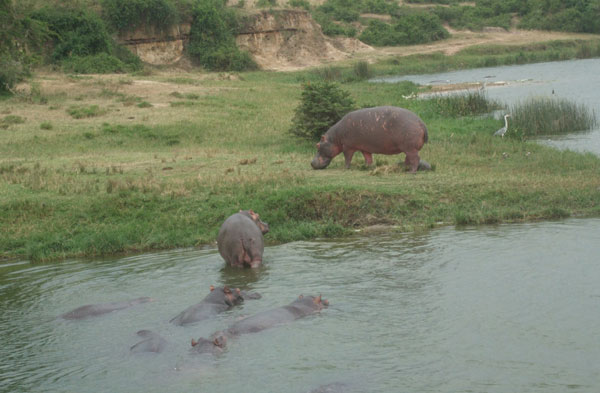 Amuru district chairperson Michael Lakony has 'sentenced to death' two hippopotamuses that have continued to destroy food crops and even killed domestic animals over a period of two years in Gaya parish in Pabo sub-county.

According to Lakony, the persistent cries from the people of Amuru, and the apparent failure of Uganda Wildlife Authority (UWA) to control the two hippos has sealed the fate of the two animals, which he says are to be killed as soon as possible.

The 'death sentence' has apparently been welcomed by most residents. Silvester Odong, LC I chairperson of Pukwany village says the two hippos have so far killed 4 cows, 10 goats and destroyed over 20 acres of food crops along R.Unyama banks. Odong's recollection of the hippos' rampaging activities dates back to May 2019.

According to Odong, they are now advising locals of the area to keep watch to avoid being attacked and killed by the wild animals. To Christine Apio, a resident of Pukwany, the order to kill the hippos is music to the ears. She says she lost 5 acres of rice to the stray hippos last year and again lost another 5 acres to them this year. Apio is now worried about where she`s going to get money for her family having invested over Shs 1.5 million in the past two years.

Lakony says they have written several letters to UWA to come to the rescue of the people but all in vain. According to Lakony, the wild animals have been causing mayhem in an 8km stretch of R. Unyama from Pabo to Atiak sub-county. That is why the community has been called upon to hunt and kill the animals since "UWA has failed to come to the rescue of the local people".

Lakony observes that the biggest challenge is that the affected community members cant get compensation for their destroyed crops and animals. Our efforts to contact Hanji Bashir, the UWA communications manager were futile as his phone went unanswered.

-3 #1 WADADA rogers 2020-09-24 17:34
I dont think the Amuru district chairperson knows the danger of taking such a decision, he will end up in prison for conspiring to kill the hippos.

Hippos are by nature territorial animals,they never go to places that are alien, they only stretch within an area that has ever been occupied by their ancestors
Report to administrator
-1 #2 Kasede 2020-09-24 17:47
Actually, those hippos are protecting their own environment from encroachment by human activities.

Who owns that environment [hippo or humans or both &/or other living things as well]? That is the question.
Report to administrator
+2 #3 Jeremy 2020-09-24 23:24
Good decision Hon Chairman, crops and livestock and indeed human life will be protected once and for all and besides hippo meat is very tasty.

Those who are talking about the environment and hippo territory are comfortable in there airconditioned offices and homes in Kampala, just ignore them, in any case the rice they eat is imported from Pakistan and the meat they eat is beef imported from Brazil and they have nothing to lose from the destruction caused by their precious hippos.
Report to administrator
0 #4 Bukenya Yusufu 2020-09-25 04:47
Let's us learn to coexist with nature

The two hippo are a resource for the farmers, district and country. To the leader Please reconsider and better utilize that resource.

For God And My Country.
Report to administrator
0 #5 Yusuf Jamal 2020-09-25 09:38
However much drastic decision made by the chairman may be tough to the concerned personels, such incidents happen not only because humans have encroached the gazetted areas, instead of following up the incident right from the begining as reported you are there mercelessly mentioning the law to the victims.

I personally, i can not say that the residence should go ahead and kill those hippos because we need them.
Report to administrator
-1 #6 Lysol 2020-09-25 10:24
The hippos are aggressive animals which always protect their territories .

The Amuru people can use some of them for food. The fatty thick skin is nutritious and a good source of protein. God created animal to provide food to human. Leviticus 11. Bible Not just for show.
Report to administrator
0 #7 kabayekka 2020-09-25 10:29
Indeed the human pressure for more land for Agric is ongoing.

One hopes that the large acreage that goes for wild animals will gradually reduce on the African continent!
Report to administrator
0 #8 Larry Mike 2020-09-25 15:24
The problem with our country is that authority has no boundary. No one knows who's in charge of anything.

We all make decisions based on guessing. How can a mere chairman make such a decision with so many implications? Only in zabu Ugandan where no one has limitations.
Report to administrator
+1 #9 Francis 2020-09-26 04:06
The chairman decision is right he is the father in the area, Traurisum industry is to benefit citizens but not to endanger livelihoods and lives of the citizens that is the negilizences of the UWA and its sad to hear someone who is sitting in his or her comfortzone and has only seen and heard the dangers of hippos from the books
Report to administrator