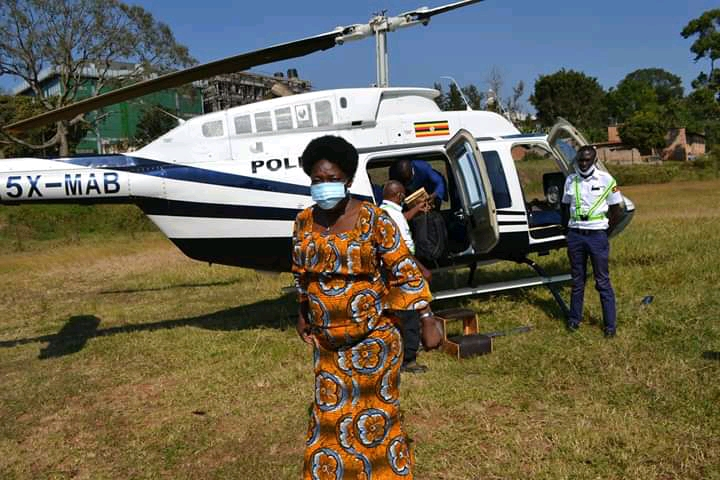 One of the three people knocked by the lead car of speaker Rebecca Kadaga's motorcade in Fort Portal Tourism city last month has died. Karima Mitala breathed his last at his home in Nyabusozi cell in Central Division Fort Portal at around 9 pm on Sunday.

His death comes more than a month after he was knocked together with two others at Boma on August 3 by a police pickup registration number UP 4842 that was leading the convoy of Kadaga as she was leaving Fort Portal. According to eyewitnesses, the speaker’s convoy was moving on the wrong side since the road is one-way.

Mitala who was riding a boda boda that was carrying two sisters; Shamilah Mbabazi and Aminah Kakwezi, both residents of Kiteere, sustained head injuries and a sharp object tore apart the flesh on his right thigh.

He was operated two days after the accident, but pus had since been oozing out of the stitched incisions that had degenerated into septic wounds. An orthopaedist, who preferred anonymity, told URN that Mitala had developed an infection that could have been as a result of the delayed operation.

At the time of the accident, the three were heading to Fort Portal city centre while Kadaga was being escorted to Boma playground to board a chopper after attending a radio programme where she had gone to campaign for re-election as 2nd vice chairperson of the NRM central executive committee (CEC).

Even though Kadaga allegedly gave the trio Shs 1 million to cater for their medical needs at Fort Portal Regional Referral hospital, the victims have been saying the money wasn’t sufficient due to the nature of the injuries sustained.

Mitala's father, Abdul Mitala says that they used all the money they had to buy the required drugs after being discharged from hospital and at the time of his death, his son was complaining of terrible pain but they couldn’t help the situation because of financial constraints.

“We have been calling the speaker’s office for more financial assistance and they were telling us that they will see. I didn’t have any more money and my son was the sole breadwinner here. I had nothing to do other than watch him till he breathed his last,” Abdul said.

Kakwezi said an x-ray had shown that her left hip was dislocated and that the thighbone had cracked. Another x-ray indicated that her left hand was also dislocated from the shoulders. Kakwezi said that after the operation, a catheter was inserted in her body to help her pass out urine but she has since remained bedridden due to severe pain.

She also said that she was unable to buy painkillers or antibiotics that were prescribed at the time of discharge. For her part, Mbabazi said that a sharp object tore apart the flesh on her right thigh, adding that even though the wound was stitched, it was still draining yet she can’t afford medication.

The two sisters are demanding compensation from the speaker. Efforts to get a comment about the matter from Kadaga’s private press secretary, Sam Obbo have been futile as repeated calls from our reporter to his phone went unanswered.

Why is death following you these days. Something is very wrong.

Death and evil are following you. Why do you people engage in wickedness?

Who in parliament ordered the head of of a child to be delivered therein in a plastic bag, [sic: just line one mother thru' her daughter Salome ordered a Baptist's on a silver plate some 2000+ years ago? Please do not answer this this question because anibody's guess is as good as mine.
Report to administrator
+2 #4 Apollo Ekelot 2020-09-22 16:21
This strange country. The haves can behave with impunity! It is said Kadaga’s convoy was moving on the wrong side since the road is one-way.

Now who is taking the criminal culpability for this or these poor wretched folks can be given 1m as a farewell gift? How about the driver of the car who was involved in this?

Quite a sad story. I would have said we demand answers but I also know the truth; they could as well blame it on the dead!
Report to administrator
0 #5 Worried 2020-09-22 17:44
Why doesnt the Speaker of her assistant help these poor people that you knocked -when you were even in the wrong side of the road???

Do you want to wait for another one to die? really?
Report to administrator
0 #6 Humless 2020-09-23 00:20
God please come and save us from this injustice of these small gods at the expenses of the least of your people
Report to administrator
0 #7 Wainanchi 2020-09-23 13:19
Sincere condolencs to the family of late victim of unfortunate traffic accident.

Many accidents happen and people have to be mindful of circumstances and take care of themeselves.

Ugandans are very often reckless and pay the price with their own lives.

When you hear alarms and sirens clear roads.Security has to clear roads for VIP convoys.Earlier a number of VIP persons in Uganda were assassinated by boda boda terrorists so it is hard to see who is who.
Report to administrator
0 #8 Wajadi 2020-09-23 21:17
Speaker should feel ashamed about this. Why no treat this poor people for heavens sake?

And the convoy was on the wrong side? Oh God this is quite painful.
Report to administrator
+1 #9 Lakwena 2020-09-24 12:00
In other words, this is just one of the curses of the VIP syndrome and arrogance in this country.

Including the Traffic and Road Act, Hon Kadaga is the head of the House that makes the laws of this land; but because of self-importance look at what her convoy has done to the poor innocent citizens of this country?

Otherwise, what is so difficult about every Ugandan: big or small; rich or poor; in a hurry or not, abiding by the same rules and regulations?

It is heartbreaking in as far as how, our so call VIPs unfairly usurp public resources for personal comfort and conveniences; while at the same look down on us like dirt and inconveniencing in their unnecessary and useless ups and down movements!
Report to administrator
0 #10 innocents 2020-09-27 06:37
...gone too soon, comrade!
#am saddened,
may the Lord's mercy be upon ur soul.
Report to administrator