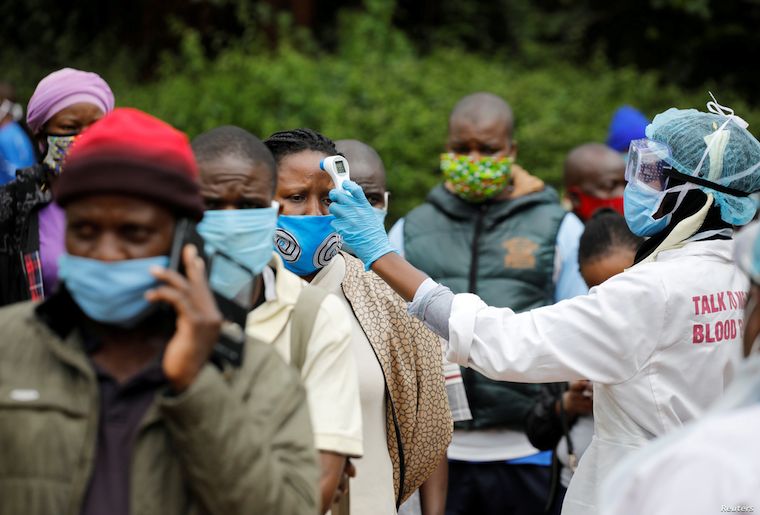 Organizations have contributed aid worth more than $2 billion to help Kenya’s in its fight against COVID-19.  But much of the aid has gone missing, prompting President Uhuru Kenyatta to order an investigation into who might have taken it.

Money and medical supplies were donated by such groups as the World Bank, the International Monetary Fund and the Jack Ma Foundation.

The Network Action Against Corruption (NAAC), an organization sanctioned by the Kenyan government to promote fiscal accountability, accuses KEMSA, a government agency that supplies medicine and medical equipment to the Ministry of Health, of embezzling hundreds of millions of dollars meant for the COVID-19 battle.

The network said officials in KEMSA ran multiple schemes. In one, NAAC said, the organization paid for personal protective equipment (PPE) that actually had been donated by the Jack Ma Foundation. The money then went to phony companies controlled by the KEMSA officials.

In another, NAAC said, KEMSA officials contracted with fictitious shell companies to supply protective equipment.  No equipment was supplied, but the companies got paid anyway.

“The PPE kits consist of a number of items, but ... the PPE kits, which they stole from Jack Ma’s donation, they would break it down," he said. "So, they have the overalls separately, they have the boots supplied separately.  So you can imagine how much were they intending to make out of that.”

Kenyatta has ordered a forensic audit into the use of both state and donor funds meant to be used to combat COVID-19.

“All persons found to be prima facie culpable as a result of those ongoing investigations should be brought to book,” he said.

“We’ve seen even as we speak now, the level of preparedness for COVID is not there yet," she said. "The isolation units that were meant to be put up are not ready. We’ve seen doctors complaining about lack of PPE, so it would seem we got these resources but we have not utilized them for the right reason and yet we will continue paying for them.”

Dr. Samuel Oroko, national chairman of the Kenya Medical Practitioners and Dentists Union, said the shortage of protective supplies coupled with the low quality of those made available is having far-reaching effects.

“The doctors and workers working in the outpatient department should be given N95 [masks] each and every day they see patients," he said, adding that the limited supply and low quality of the PPE "has led to more than 1,000 health workers being infected with the coronavirus.”

Kenya’s Senate and investigative agencies have been tasked with unraveling the allegations of financial misappropriation.

Meanwhile, the country’s Health Ministry has recorded more than 36,000 confirmed cases of COVID-19.

They should target them with sanctions including their children. The vice could stop.
Report to administrator
0 #2 Akot 2020-09-21 15:24
Quoting Mbeho Achuc:

They should target them with sanctions including their children. The vice could stop.

it's so senseless, developed countries ensure useless African rulers are finance but don't care Africans get NOTHING out of it, not even for Education & Agriculture!

Do we still wonder why Africans die dayly in Sea to reach Europe, the financers of useless African rulers?

But of course, it's "the people" who MUST ensure they are well governed & served!
Report to administrator