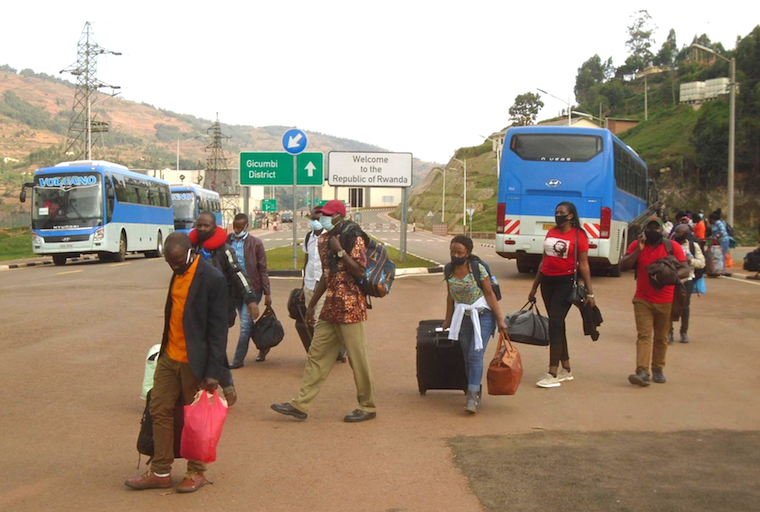 The first batch of 100 Ugandans who were stuck in Rwanda because of the Covid-19 pandemic restrictions returned to Uganda on Tuesday.

The group which was flagged off by the Charge d’Affairs of the Ugandans Embassy in Rwanda’s capital Kigali, Anne Katusiime travelled in four coaches belonging to Volcano Bus company. They were dropped off at Gatuna border and each bus carried only 25 passengers to enforce physical distancing guidelines.

The group that arrived at Gatuna border at about 12:30 pm but was first held by Rwandan security and immigrations officials until after about 5:40 pm when they were cleared to cross over into Uganda. One of the female returnees was whisked off in a private Super Custom vehicle registration number UBD 004F to Kampala.

The four occupants in the vehicle informed security officials that they had orders to pick her up because she was very sick. However, the security officers first blocked the vehicle from proceeding back to Kampala for about an hour as they consulted their superiors on phone.

The returnees are part of 350 Ugandans who have been stranded in Rwanda since Covid-19 broke out in the country. Ugandans were trapped in Rwanda after President Yoweri Museveni announced a nationwide lockdown including closing borders to contain the spread of the novel coronavirus.

Wallace Bindeeba, the Katuna cluster immigration officer who led a delegation of Ugandan officials that witnessed the repatriation exercise, said the returnees will first be inspected by health officials from the Kabale district Covid-19 task force before being transported to Entebbe for the mandatory quarantine.

"We have received the first batch of 100 Ugandans from Rwanda. Upon arrival in Uganda, they shall pass through immigration and thereafter the health team shall also pass them through another process. Then they will proceed with buses to Entebbe for institutional quarantine," said Bindeeba.

Security officials blocked our reporter from speaking to the returnees who looked very tired and hungry. Another batch of Ugandans will be repatriated from Rwanda on Saturday this week and Wednesday next week.

0 #1 Mbeho Achuc 2020-09-17 03:00
And why wouldn't the "very sick female" returnee be transported more safely using an ambulance to Kampala ??
Report to administrator