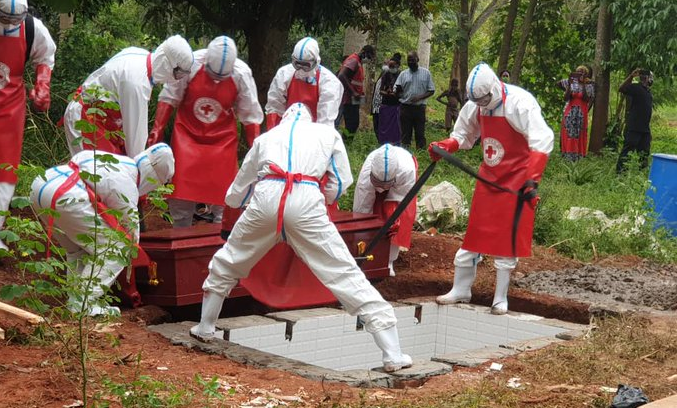 According to Onyanchi the deceased has been a known diabetic patient and he has been battling the illness for the last 10 years. He says that the deceased was admitted at the hospital emergency unit on September 8 with difficulty in breathing and he died three days later last Friday. When his samples were taken, the results were positive for COVID-19.

The in-charge of Masaka hospital COVID-19 treatment centre, Dr Mark Juuko says that all the attendants that the deceased interacted with are known and will be traced for testing.

He, however, complained that the results are returning late which could cause a tracing problem. He says that they have started contact tracing of all the contacts of the deceased including health workers that handled the police officer when he was admitted.

"He was admitted at our emergency unit, the health team is well trained so they were able to make the necessary precautions and were able to identify this as a COVID-19 suspect and samples were taken off on Wednesday. Unfortunately, there was a bit of delay in getting the results and the patient passed on. We were able to get results at around midday [on Monday] which turned out to be positive, the burial team took over and they buried the deceased. Some of our health workers were in contact with the deceased and as we speak we’re doing risk assessment and sample collection from all health workers who were in contacts," said Juuko.

Juuko has warned the public against being complacent, saying that the growing numbers of people with the virus will soon overwhelm the front liners the health workers and they lose the battle which they had managed well at the start.

The Southern Regional police spokesperson Muhamad Nsubuga described the incident as unfortunate, saying that they are working closely with the health workers to identify the contacts of the fallen police officer. Masaka regional treatment centre unit currently has 11 patients that are undergoing treatment while the Masaka burial team has so far conducted 9 burials of COVID-19 deaths.

In a related development, Uganda's coronavirus deaths increased to 56 after another patient passed on in Kitgum according to an update from the ministry of Health on Monday. Also, the cumulative total cases increased by 179 to 4,978.