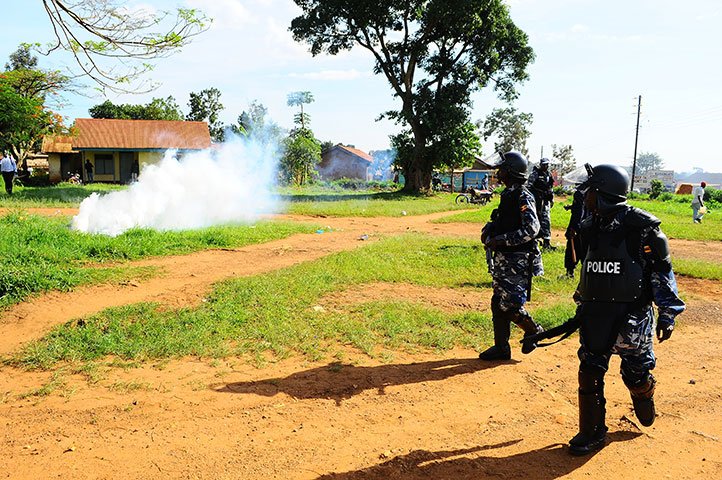 Locals in Wigweng village, Lira in northern Uganda have accused police officers of deliberately firing tear gas to disperse them so as to create a disarray situation where they can extort money and rob them of their property.

According to the residents, some police officers attached to Lira Central police station torture suspects, extort money from them and have now resorted to habitually fire tear gas and live bullets to create panic and anxiety among residents.

Residents have cited the Friday operation led by Geoffrey Katabazi, the officer in charge Teolam outpost where police officers stormed the village and allegedly assaulted them from inside their respective homes. The concerns were raised during a security meeting held on Sunday at Wigweng village Barogole parish in Lira City West.

Residents claim that police used tear gas to disperse supporters of George Mawa, who had gathered outside the ruling National Resistance Movement (NRM) office at Wigweng village before proceeding to rob them after Willy Omodo Omodo was declared NRM flag bearer for Lira city mayor.

Ross Okello Muhammad, one of the victims assaulted says police found her at her home having supper before proceeding to beat her without any clear reasons. She says, as a result, she now has multiple injuries on her body besides losing her cellphone to the police attackers.

Francis Ogwang, another person who was also allegedly beaten badly, says he is considering reporting a case against the Lira district police commander Bernard Mugerwa and the security team for assaulting him at North Kyoga regional police office so that legal action is taken against him.

Patrick Ojok, the Area LC I chairperson of Wigweng village, however, says the brutality against his innocent people is becoming habitual especially when NRM has events at the party office in Wigweng village.

According to Ojok, his committee is writing to the NRM secretariat soon, demanding that they transfer their NRM-Lira office to another place to avoid the continuous suffering of by his people.

Bosco Ongom Goi, the area councillor of Barogole parish to Ojwina Division council, says they want Lira resident district commissioner (RPC), Milton Odongo, who doubles as head of security to go to the ground and apologize to the affected residents.

However, Lira DPC Mugerwa dismisses the allegations as baseless, saying that "...there was some confusion resulting from acts of hooliganism by the groups of people who had converged at the tally centre, we had to apply reasonable force to calm the situation, not necessarily extortion and torture as such," he said.

He adds that no one has reported any case against police assaulting civilians in the village, adding that security will nevertheless investigate the matter. Geoffrey Katabazi, the officer in charge Teolam outpost in an interview with our reporter denied the allegations that he has never commanded the operation in the area.