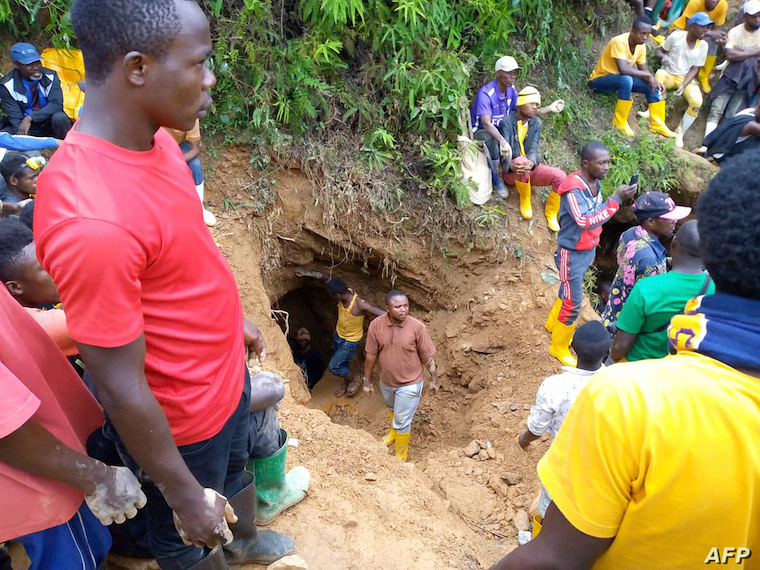 Rescuers work in Kamituga, South Kivu at the entrance of one of the mines where dozens of Congolese artisanal miners are feared to be killed after heavy rain filled the mine tunnels

Informal gold miners in eastern Democratic Republic of Congo scoured rubble Saturday for more than 50 colleagues presumed dead after a mine collapsed under the weight of heavy rain.

Hundreds of young men in rubber boots crowded around the site of Friday's cave-in, with some removing rocks by hand from the muddy hillside, video footage showed.

Dozens of people die each year in accidents in largely unregulated artisanal mines in Congo, where often ill-equipped diggers burrow deep underground, searching for ore. Alexandre Kamundala, deputy mayor of the nearby town of Kamituga, said no bodies had been recovered so far.

"The rescue teams have been working hard since this morning to try to find bodies, but given the lack of working tools, they are finding it difficult to move forward efficiently with the search," he said.

The office of the governor of South Kivu province, Theo Kasi, said most of the victims were young people, and he expressed condolences to their families.

"The search continues to identify our deceased compatriots, bring assistance and implement measures to prevent such incidents from repeating," Kasi's office said in a statement.

Cave-ins, landslides and asphyxia are common risks faced by artisanal miners, who rarely have any protective equipment beyond rubber boots, according to Sara Geenen, an assistant professor at the University of Antwerp in Belgium who has conducted research at artisanal gold mines around Kamituga.

"Being an old mining town, Kamituga does have quite a lot of people with geological and technical expertise, but they often don't have the financial means or access to technology to dig and shore up the tunnels properly," Geenen said in an email.

A World Bank report last year estimated the number of small-scale miners in Congo at 2 million, many more than work in industrial gold, copper and cobalt mines owned by companies such as Glencore and Barrick Gold.

Kinyenye Furaha passed out from shock when he realised a #gold mine collapse in eastern #Congo had buried more than 50 fellow miners, including his brother, as the hunt continues for bodies two days after the disaster near the town of #Kamituga in #DRC - @ReutersAfrica @ReutersTV pic.twitter.com/FyNCrSi9VS