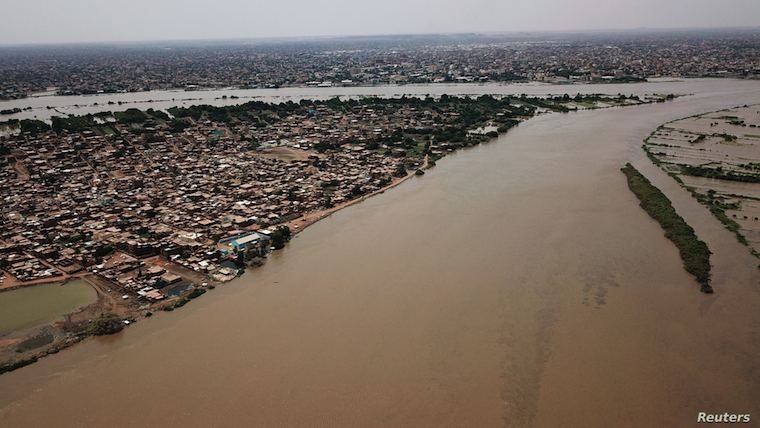 An aerial view shows buildings and roads submerged by floodwaters near the Nile River in South Khartoum, Sudan

Sudanese authorities have declared a three-month state of emergency after record flooding left over a hundred people dead and tens of thousands homeless.

Floodwaters are also threatening to damage Sudan's ancient Meroe Pyramids, a UNESCO World Heritage Site. The River Nile has crested to its highest level in one hundred years. At least 103 people have been killed by drowning, houses collapsing and road accidents caused by the flooding.

Now, thousands of Sudanese families are sleeping in the outdoors, waiting for shelter, food and medicine. 40-year-old widow Aisha Adam is one of them. Adam says she is sleeping in the street after the river suddenly destroyed her house in Northern Khartoum; she says she is looking after her sister and five children, and waiting for shelter and aid.

The Sudanese government has made an urgent call for organizations and civil society to provide assistance.  U.N. agencies started efforts this week to supply medicine, tents and safe drinking water. This is Tinago Chikoto, deputy head of the U.N. Office for the Coordination of Humanitarian Affairs in Sudan.

He says help is definitely required from the government and their partners in the U.N. and NGOs besides civil society.  The urgent needs are for plastic sheets, tents, health supplies and the provision of safe drinking water.

Floodwaters are also threatening to damage Sudan's ancient Meroe Pyramids, a UNESCO World Heritage Site. The national museum of Sudan was also affected by the waters this week after the flooding hit central Khartoum. UNESCO began to evacuate artefacts from the museum Thursday and said it shall preserve all the affected World Heritage sites.

Siddig says UNESCO has registered many monumental sites in Sudan.  The goal of registration was to preserve this heritage and save it from destruction whether by human or natural factors. Siddig adds that the flooding is raising concerns regarding the sites, especially the museum, so UNESCO started to evacuate it in a coordination with the authorities.

Many Arab countries including Saudi Arabia, UAE and neighbouring Egypt have sent tons of medical and food supplies this week. The Sudanese government has allocated $2.7 million to help those made homeless.  The government is also making plans to combat expected epidemics like malaria and cholera.

Meanwhile, the floods are likely to continue, as Sudan’s meteorological authority expects the rainy season to extend until the end of September.