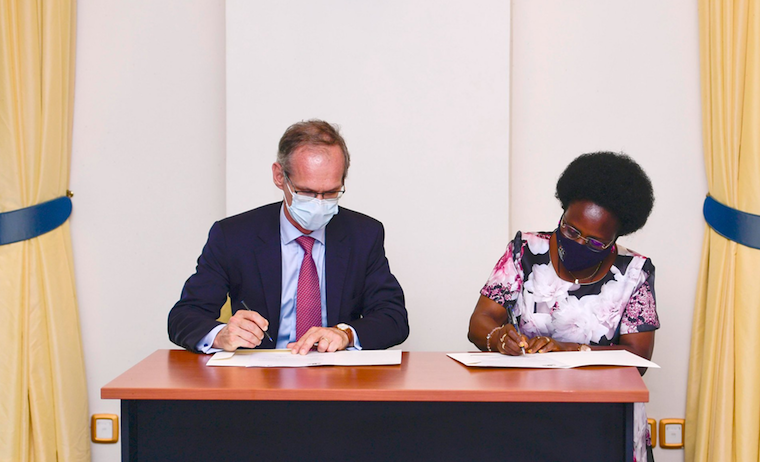 The Uganda government and the French oil giant, Total E&P have reached a major milestone that paves the way for a final investment decision (FID) on the production of Uganda's oil.

This came during a meeting between President Yoweri Museveni and Patrick Pouyanné, chairman and CEO of Total, and the signing of the Host Government Agreement (HGA) for the East Africa Crude Oil Pipeline (EACOP) project. The meeting was held at State House, Entebbe on Friday.

The two agreed on the conditions of how the Uganda National Oil Company (UNOC) will join and participate in the EACOP as well as on the Host Government Agreement which will govern the export pipeline in Uganda. The project is expected to cost the consortium $3.5 billion with construction expected to start early next year.

"We have today reached major milestones which pave the way to the final investment decision in the coming months. We now look forward to concluding a similar agreement with the Government of Tanzania and to completing the tendering process for all major engineering, procurement and construction contracts," said Pierre Jessua, managing director of Total E&P Uganda.

He said, the conditions are set for the ramp-up of project activities and in particular, the land acquisition activities in Uganda. Total E&P committed to respecting the highest human-rights standards while carrying out these activities. The company reiterated its willingness to pursue a constructive dialogue with the communities and NGOs regarding all project activities.

“I am glad that Total and other companies licenced in the country are taking bold steps to quickly commence the production of petroleum," Museveni said after the event, adding that the delay was deliberate to avoid some mistakes in the processes. Museveni reiterated that Uganda's proceeds will be used to develop infrastructure and ICT.

"It has taken long but I want to assure Ugandans that this was deliberate. We have gone through every item. Uganda is a rich, with oil as a small fraction of this wealth. The big part is agriculture, industry, services & human resource. Oil, however, can spark off the transformation." Museveni added.

Total E&P Uganda is leading the development activities towards production in the Tilenga project area - Exploration Area1 (EA-1) and Exploration Area2 North(EA-2N) within the Albertine Region.

French president in post for 3 years is already fighting for reelection in 2022!

But Uganda ruled by demon Museveni for 34 years poses no problem for Total that doesn't care about poor Ugandans, as long as France gets it share of Uganda richess!

France is 1 country where tax money is used for public/social purposes;

- Compulsory Education for all kids & parents who don't take kids to school lose their custody,

- National Healthcare for all,

- Social benefits for those without jobs.
Report to administrator
+1 #2 Lysol 2020-09-12 20:26
Total has made a political move to ensure that M7 stays in power, unlike the General Electric which is dragging it feet, until the fake election.

French would be laughing as they ensure good governance & have good public/social services assured by tax money!

French presidential term was brought to 5 years from 7 & Macron is already fighting so hard to get second term in 2022!

With Covid-19, French are tested freely every 2 weeks & prime minister is the latest tobe tested, packets of masks deposited freely in letter boxes for those depending on social benefits, this even when they have already been given extra money for food!

Total has made a political move to ensure that M7 stays in power, unlike the General Electric which is dragging it feet, until the fake election.

It's yet to know when that oil will begin to flow out of the ground.

Foreign companies need money for their motherlands through taxes & Uganda oil will be 1 huge help for French public/social services!

Uganda belongs to Ugandans who alone have the power & legitimacy to decide who rules them, how, for how long, so foreign cos. will do business with Museveni & make him richer!

Migrants/refugees know France is a country they must die to reach, especially parents with 3+ kids & the under -18 travelling alone who are taken & sent to school!
Report to administrator
0 #6 Wainaichi 2020-09-13 23:43
@ Akot-- Ooopsy Daizy!

I did not but publically whenever you are in queation' I tick for you BIG RED MINUS Yoh smell rats and you are muyaye. Hahahaha
Report to administrator