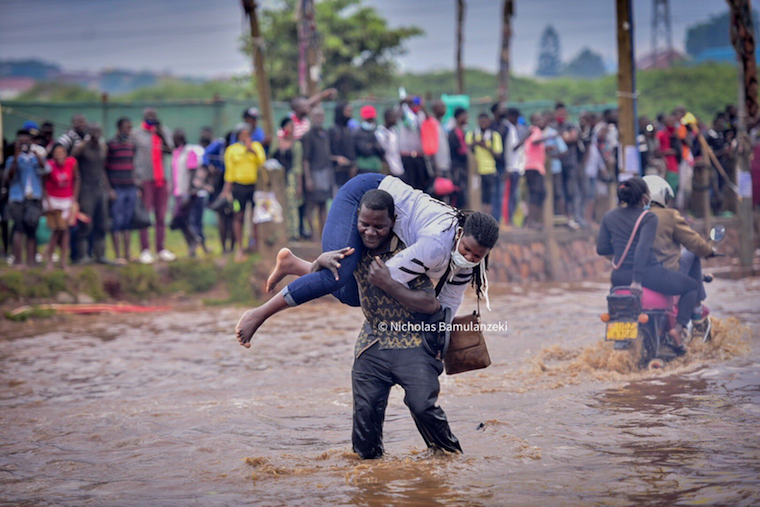 A woman being carried across a flooded road near Clock Tower

The two bodies were recovered near Total fuel station, where they were carried by floodwater from different parts of the city.

Kampala Metropolitan police spokesperson Patrick Onyango has identified one of the deceased as a female juvenile aged 12 years, named Namazzi Alyera, a resident of Nsambya Kitooro in Makindye division of Kampala. But the other deceased, a male adult, is yet to be identified.
Preliminary findings show that Namazzi was playing with her friends during the rain when their ball fell in a trench. She tried to remove the ball, but the water overpowered her and swept her away, according to Onyango.

According to police, her body was swept up to Clock Tower, where a boda-boda rider saw it and informed the police near Shoprite in Kampala. Police retrieved the body but while still at the scene, another body of a male adult yet to be identified appeared.

In May this year,  56-year-old Cissy Namukasa, a market vendor, drowned in Nakawa drainage channel during a heavy downpour. Footage from the security cameras showed Namukasa falling in a trench and being washed away towards Industrial Area by fast running water, as her body disappeared until today.

More than 190 people drowned in trenches, lakes, rivers and septic tanks last year,  according to a recent report presented by the assistant inspector general of police Joseph Mugisa, the director fire and emergency rescue in Uganda Police Force.

Patrick Onyango has appealed to members of the public to be very cautious during this rainy season.

+3 #1 Odongkara 2020-09-11 20:31
I started living in Kampala from July 29, 1969 to date. Kampala then experienced almost daily heavy rains year round but there were no heavy fliodings like what are being witnessed now even with the slightest down pour.

Shoprite Jinja road stands on a natural water catchment basin, where does this water go to now? Kampala can now be described as the city of man made floods as a result of greed, corruption and incompetence.

Some idiots talk of "stellar leadership" under the NRM but the truth is that Uganda is besieged by a gang of thugs who do not wish the country well because they do not belong to it.

Jesus said the thief comes to destroy and kill, these guys are robbers and murderers. How do you destroy these swamps around Kampala and expect no floods? You will never defeat nature.
Report to administrator
+1 #2 Kalibbala 2020-09-11 21:47
#Odongkara..Spot On My Man..I came to Kampala in 1974 to Join Senior Secondary and I remember a Shining City with Gardens and Flowers along Entebbe Road!!

The Old Park had a Writing in Flower Beds saying "Keep Kampala Clean"Then Came Notorious Robbers Army of Refugees with Morons who never Visited School and were Blood Thirsty!!.

They Started by Demanding 30% of All our Savings then Started Stealing Everything they Found! All Government Buildings Plus Land!!

They Built in All Channels and Drainage Systems that Used to Carry All this Water down To Bwaise...They keep Promising poor Ugandans of Fly-Overs and De-congestion Which will NEVER COME...Look Around You!! Kenya has Smart Cities of Konza,Kisumu ,Eldoret,Kakamega etc

All Well equipped ! WAKE UP People..These Killers came to Finish you UP..Demand Our Country back at All Costs..
Report to administrator
+1 #3 Jonathan 2020-09-11 22:19
May God's curse and wrath be upon NRM government and its leader for causing the death of innocent Ugandans who perished during the flood.

These blockheads ( Mitwe ngalabi) in the government allowed the destruction of swamps and water catchment to go on with Impunity . We hold them responsible for loss of innocent people .May their souls rest in peace
Report to administrator
+1 #4 Lukwago muhamed 2020-09-12 12:14
The floods are a manifestation of poor urban planning on the city authorities. then there's too much tarmacking and paving nowadays resulting into too much runoff that ends up down our swampy city.

we need to reconstruct and widen nakivubo channel since its our major drainage channel for kampala. Trunch channels should also be widened and constantly dredged especially on onset of rainy season.
Report to administrator