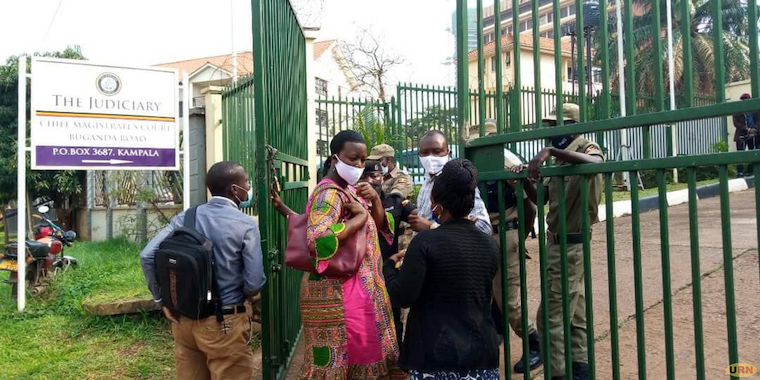 There was heavy security deployment at the court premises

The case in which National Unity Platform president Robert Kyagulanyi and four others are charged with disobedience of lawful orders has been referred to the Constitutional court for interpretation.

The state further alleges that the accused refused to coordinate and cooperate with police to ensure that all participants in the demonstration were unarmed and peaceful.

Kyagulanyi, together with a group of other activists, held a demonstration in downtown Kampala against the Shs 200 excise duty for use of Over the Top (social media) saying it was unfair since Ugandans were already paying for taxes on airtime. A recent report by the World Bank indicated that tax had failed to meet its target as a large section of Ugandans avoided paying the tax by either using virtual private networks (VPNs) which disguise their location or went off social media altogether.

When the case came up for hearing in February 2020, city lawyer Anthony Wameli asked the court to halt the criminal proceedings and refer the case to the Constitutional court on grounds that his clients are being charged under the laws which contravene provisions of the constitution.

Wameli noted Section 5 and 10 of the POMA that requires a person organizing a public function to notify the police prior in writing, but according to Wameli, this is inconsistent with Article 29 of the constitution which guarantees freedoms of assembly and association.

She has also issued criminal summons against Julius Katongole, Fred Nyanzi Ssentamu and Robert Kyagulanyi who were absent as she delivered the ruling. She also directed the parties to return to court on November 5, 2020, to update her on the progress and feedback from the Constitutional court regarding this matter.

Earlier, roads leading to Buganda Road court had been blocked from the neighbouring Central police station. There was also heavy security deployment outside the court premises.

0 #1 Akot 2020-09-10 18:17
Ugandans cannot let them be locked in fake court procedures, fight to maintain or get posts, fight one another while Museveni rules beyond 35 years!

Time the tribalistic system, the solid socket of Museveni's evil rule, is brought down & UNITY will block the demon & leave him no chance to continue!

Do Ugandans want to live FREELY on their land or not?
Report to administrator
+1 #2 Lysol 2020-09-10 23:55
The fake election is around the corner and the court is simply playing the delaying tactics.

That tax was simply imposed, in order to silence the voices of the corrupt regime's critics. It will one day be dropped after Museveni. is gone.
Report to administrator
0 #3 Akot 2020-09-12 17:17
Lysol, thanks.

Museveni will use, play with Ugandans unless our people wake up to realise it's them keeping the migrant in power by;

- maintaining the divisive tribalistic system that
disempowers them,

- tribally divided Ugandans, without common National
Leadership, will go for next fake election they
already know the result!

Demon rulers live +90 years, never leave posts, unless the people UNITE & come out against them!

How can Ugandans fight for posts, block, arrest & bring to court those who oppose Museveni, to ensure he rules for life?