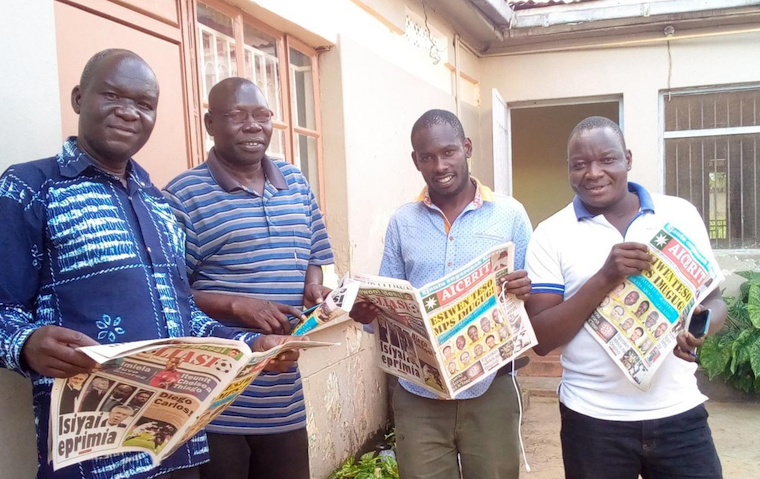 Some of the brains behinds Aicerit newspaper

Former Vision Group journalists who were laid off when Etop newspaper shut down earlier this year have started a weekly Ateso language newspaper called Aicerit.

Aicerit, which literally means 'star' in Ateso, hit the streets of Soroti city and other towns on Wednesday morning. It comes five months after Vision Group stopped the publication of Etop, the only Ateso newspaper and subsequently laid off all its staff in May 2020.

The affected journalists teamed up with their colleagues in June to start the Aicerit publication. The long-awaited newspaper came with an analysis of the NRM parliamentary primaries as its lead story and was sold out by midday.

James Odongo Akia, one of the directors of Aicerit, says that the closure of Etop newspaper gave them an opportunity to rethink and establish their own publication.

With a team of seven other journalists, Akia says they are determined to ensure that Aicerit newspaper keeps the Ateso language alive as it champions development in the region.

"When Etop closed, we could not sit back as if we never had brains. So we said we have the brain only that we don’t have equipment. So we collected our small resources and first registered the company and after registration, we were given a certificate, then we went to [Uganda Revenue Authority] and cleared with Revenue. Of course, we had to open an account and then went in to collect some money [bought] some equipment. We then kickstarted collecting stories from the field. We had editors, reporters and photographers. We were all around." said Akia.

Emmanuel Opio, the company’s acting secretary says Aicerit will explore different news segments that will help redeem Iteso region from the current poverty levels, where the region is ranked among the second poorest in the country.

He explains that most of the people are swimming in poverty because of inadequate information and guidance in society, the gap he notes will be bridged by the newspaper.

Juliet Asege, a resident of Pamba ward in Soroti and one of the first persons to read Aicerit’s first edition says she is impressed with the analysis in the paper.

“My only hope is that the paper doesn’t become a rubber stamp for evildoers in the region. I expect the paper to be independent and reliable to help readers make informed decisions. It is political time and I hope it will continue to provide analysis for people to choose good leaders”, she said.

And cyber journalism is still a far away dream for small regional news organisations in Africa where access to the internet is still spotty at best.
Report to administrator
0 #2 WADADA rogers 2020-09-11 08:27
Good job guys, at least you did not turn out to be cry babies for being laid off.

However you must be rudely reminded that the future of print media is in balance, it is almost impossible to provide any breaking news in the print media due to heavy competition from the social media, there is need to think outside the box
Report to administrator
+1 #3 Apollo Ekelot 2020-09-11 09:17
Very good insight here but the promoters must choose their niche thoughtfully for the right niche is important for the success of the newspaper.

There are many different things, problems, interests, programs, causes, products, and services that affect the people of Teso.

They need however to remember that in order for Acerit to become a staple for the Teso community, it must address the real needs and be somewhat predictable. The print paper is coming at quite a challenging time with most things going virtual.

The team need to bring their understanding of the challenges Etop faced and ensure these are well mitigated. I am sure they know the topics that made people to anticipate Etop every week but they must go beyond these to meet the needs of the readership.

They also need to balance this against the type and the quality of the clientele. Affordability and distribution are important considerations. I hope in future they think of an online version.
Report to administrator