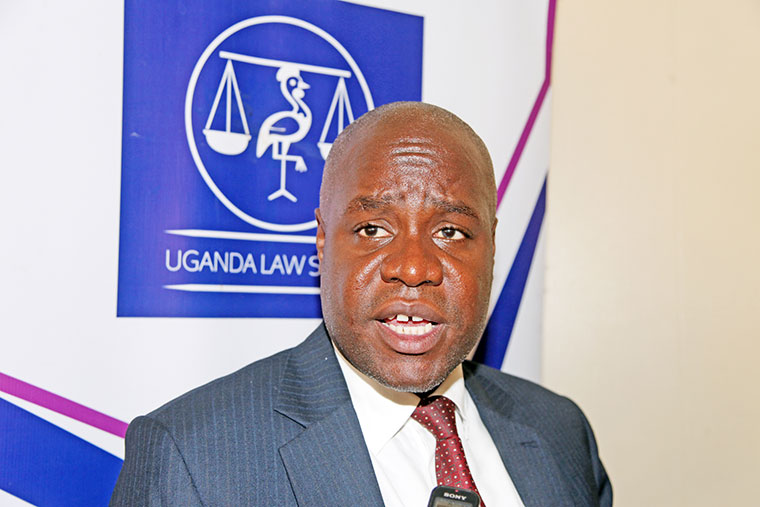 This weekend on September 12, the Uganda Law Society (ULS) membership will converge at the High court premises to elect a new leadership.

The eagerly-anticipated polls were postponed from April due to the Covid-19 lockdown of the country. At stake is the position of president, vice president and treasurer but Ritah Namakiika, the secretary, is unopposed.

Over the past five months, there has been a great deal of lobbying from leading stakeholders in ULS. Much of the focus is on the presidency, where Bernard Oundo, Anne Karungi, Nelson Walusimbi, Pheona Wall Nabasa and Rashid Ssemambo are contesting to replace Simon Peter Kinobe.

The Observer previews the race through the eyes of each candidate’s endorser.

The Uganda Law Society needs a leader that has been tested, a leader that can keep a cool head in a crisis and one that delivers results.

I have known Pheona since she was an undergraduate in Makerere University and I believe she is such a natural-born leader.
She has led various successful teams including the National Water and Sewerage Corporation (NWSC) legal department, which was very instrumental in lobbying the judiciary for a Utilities court.

She has worked in private practice, lectured law at Kampala International University (KIU) as well as serving in various civil society organizations. Her wide experience makes her the best candidate to represent our advocates in Uganda.

Pheona is dedicated and committed and has worked tirelessly to grow the East African Law Society (EALS) in-house counsel committee and is always available to help the natural resources cluster of the ULS, which I am involved with.

Under Pheona’s leadership, there has been a lot of work done to promote human rights and the rule of law. I was particularly impressed with the growth of the ULS legal aid project under her leadership and the pro bono project’s continued support for vulnerable members of our community during the lockdown and their securing IDLO funding in such difficult circumstances.

I believe that Pheona has proved herself. ULS will gain a lot from her servant leadership style, her corporate governance experience and her social capital. She definitely is Faithful available and teachable, qualities we need right now.

The author is an advocate and senior legal manager, Umeme

It is not often that you find a person who possesses the qualities of humility, generosity as well as being a unifier. That’s exactly the best way to describe Bernard Oundo, someone I have known for more than a decade.

As someone who understands the importance of unity, the Uganda Law Society badly needs a leadership that brings together all stakeholders. Through his mentorship clinics, hundreds of young lawyers have benefitted and passed on the knowledge to others.

The Covid-19 pandemic has also served to show us the rare leadership attributes of Oundo. As many lawyers pondered what to do, Oundo brought key players together to deliberate on the plight of lawyers as well as forging solutions about the future of the bar.

What makes him stand out is that he prefers to let his services do the talking instead of blowing his trumpet. His agenda focuses on professional development and members’ welfare will create affordable training for young lawyers while his quest to foster access to justice will create a legal aid fund where organisations and members contribute as part of their corporate social responsibility.

Meanwhile, he intends to create a regional presence of the ULS as well as promotion of transparency and rule of law. All these will transform ULS into a modern bar association through the various innovations.

In sum, I understand ULS has many people with leadership qualities. Even his competitors have impressive resumes. However, I cannot look beyond Oundo for the next ULS president.

Karungi is the most formidable candidate

She is genuine, tenacious, intelligent and charismatic. She is passionate about governance. Anne Karungi is one person who can engage with ease any person in her profession on any matter concerning the affairs of our country without mincing words.

Anne currently sits on the executive council of the Uganda Law Society as the Central Region representative. She has litigated up to the highest court in the land and contributed to the jurisprudence of this country and hence won the respect of senior members of the fraternity.

She has served in various capacities in the Uganda Law Society. As a young lawyer, she served under the leadership of James Mukasa Sebugenyi. She has cut her teeth on matters concerning the rule of law and fundamental human rights of Ugandans.

Under institutional excellence, Anne advocates for ethical leadership at the helm, transparency and accountability in the day-to-day running of the society as well as leveraging on technology in order to develop software that will enable easy and timely access to vital information by every member of the society.

Under legal career and legal practice, she vehemently advocates for the need to benchmark with other bar associations on best practices. She has on several occasions be calling for the amendment of the Uganda Law Society Act and the Advocates Act, which she believes are outdated and not in tandem with today’s legal practice much to the detriment of a practicing lawyer of this generation.

Under rule of law and administration of justice, she is calling on the Judiciary to fulfill its mandate through quick disposal of cases as well as the ending of corruption in the Judiciary.

Anne is passionate about the plight of the women and girl child in Uganda and has on several occasions called on the government to critically address sexual and gender-based violence whose figures have been on the rise over time. Anne believes it is time for a female lawyer to once again take on the mantle and lead the society to unprecedented heights and miles.

For those very reasons I, Friday Roberts Kagoro, endorse her as the next president of the Uganda Law Society.

The author is senior partner at Muwema and Co. Advocates

Rashid Ssemambo is a pragmatic and solution-oriented private legal practice. He has been involved in litigation where landmark decisions have been made.

Over the years, Ssemambo has developed a knack for offering the best legal solutions in the most effective manner. He has, therefore, made a recognizable contribution to the development of our jurisprudence.

Ssemambo has also served in the academia for many years. Having taught at various universities, he is currently teaching corporate and commercial practice as well as civil litigation at the Law Development Center (LDC), where he shares his personal experience with the future legal practioners.

The progressive hands-on experience he has gathered over the past 15 years has been a great motivation for his decision to contest for the position of president Uganda Law Society.

Since he began his practice as a legal associate and slowly developed into owning and managing his own law firm for more than a decade, he understands the challenges facing the young lawyers who have just joined the practice as well as the issues facing our senior colleagues who run and manage their own law firms.

He is, therefore, able to bridge to create consensus amongst all members of our fraternity in order to encourage a sense of collectiveness which is of paramount importance in resolving whatever challenges that may arise. On this background, I have no doubt he is the best suited candidate to positively transform ULS.

The author is an advocate of the High court.

At any election cycle, it is very easy for any candidate to promise heaven on earth without intention of fulfillment at all.

In the race for the presidency of Uganda Law Society, as a young lawyer, I have set out to look for a candidate who is passionate about young lawyers’ issues. Nelson Walusimbi is the only one who has consistently expressed concern for the young lawyer.

His campaign has verbalized young lawyers’ issues to range from a dysfunctional enrollment process many times costing up to two years; a widespread lack of contracts, especially for young lawyers in firms; low pay or no pay; toxic work environments and costly continuing legal education, among others.

He has committed to use his statutory seat at the law council (working with the other representatives thereat from ULS) to push for reforms of the otherwise useful institution (Law Council) to make it more efficient by among other harnessing technology and to make it more courteous.

Walusimbi has also committed to push for law council to concern itself more with the welfare issues of young lawyers when inspecting chambers.  I have found this message most appealing.

In addition, I find him a relatable person, calm and yet resolute as seen from his challenge of perceived illegalities by the society before which won him much acclaim.

He is not a name dropper and understands definitely understands the plight of the majority of lawyers. Finally, Walusimbi’s message of accountability (cleaning up ULS), addressing members’ socio-economic welfare and inclusiveness points clearly to the very needs of Uganda Law Society which finds itself at the crossroads.

For the above reasons, I will be voting for him.

The author is an advocate of the High court.

What is so special about ULS leadership?

The Uganda Law Society (ULS) is one of the most prestigious professional groups. Because of this, it is also one of the hardest to break through due to the bureaucracy and strict processes that require one to study law at university on top of passing the diploma in legal practice.

On that background, little is known about ULS internal dealings and oftentimes, it is during election time that the society leadership is scrutinised.

On September 12, the lawyers will meet to elect a new president. Those contesting for the presidency include Pheona Wall Nabasa, Bernard Oundo, Anne Karungi, Nelson Walusimbi and Rashid Ssemambo.

Meanwhile, it is a two-way battle between Diana Agwech and Bernard Mukasa for the vice presidency whereas Shane Musanase and Goddy Muhumuza are vying for the position of treasurer. On paper, all positions in ULS are held on voluntary basis but there are many privileges and perks that come with the leadership.

For starters, the ULS president is automatically bestowed upon the title senior counsel. This is one of the most coveted in the legal fraternity and many lawyers fail to acquire it even after serving for more than 20 years.

In practice, a matter or suit involving a senior counsel is given priority over other cases before court. The leverage of the ULS president extends to policymaking, where he/she may act as a judge in disputes amongst members on top of guiding the society and court on some matters regarding the rule of law.

Beyond being just the face, ULS leadership also controls all donor funds from development partners with the main goal of improving access to legal representation and advancing the cause of the rule of law.