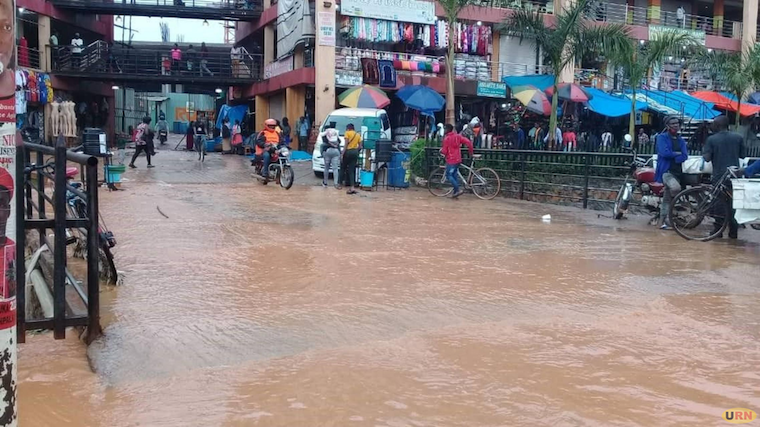 Traffic and business came to a standstill today Wednesday following a heavy downpour in Kampala.

The most affected roads were John Babiiha road where road construction works are on-going and Kyaggwe road near Swaminarayan Temple. People with businesses along Kyaggwe road were forced to close after water entered their shops.

Business at Ham Shopping Grounds also came to a standstill as Nakivubo Channel overflowed and left the shops submerged in water. The floods flowing from Clock Tower to Nakivubo Channel submerged the road making it nearly impassable for pedestrians and small cars. Some people were forced to remove their shoes, fold their trousers and wade through the floodwaters.

Some men were seen charging Shs 1,000 to carry pedestrians who didn't want to wade through the water, on their backs. This isn't the first time Clock Tower is flooding. Various attempts have been made in vain to improve the drainage and ease the water flow.

Brian Bagala, an engineer in charge of drainage at Kampala Capital City Authority (KCCA) says the Clock Tower is bound to flood especially now that the area is excavated as works continue under the Kampala flyover project. He says as works proceed, some of the drainages in the area has been affected.

He, however, says the status will improve when the flyover project is concluded and the drainage in the area is worked upon. The Nakibubo Channel is the converging area for storm-water in the central business area.

Over 500 manholes are placed in the city leading storm-water into Nakivubo Channel. However, the channel is overwhelmed due to the grounding erection of buildings that have taken up the green spaces that could accommodate water.

In 2019, with funding from World Bank under the Kampala Institutional Infrastructure Development Project, KCCA contracted a consultant company, Nippon Engineering to study the channel and conduct an assessment, modelling and redesigning of the catchment area.

The consultant was supposed to conclude works by this month but Bagala says their activities were interrupted by COVID-19 lockdown and were hence granted more time until December 2020.

+3 #1 WADADA rogers 2020-09-09 21:54
Kampala is obviously a town that existed by accident, it lies in a swamp and is run by thugs on the left, right, centre, up and down, such things are bound to happen especially that swamps have been back filled and developed with massive structure built by illicit money
Report to administrator
+1 #2 WADADA rogers 2020-09-09 22:05
A disorganized city, no wonder some former president wanted to shift it to Nakasongola
Report to administrator
+1 #3 Ugthinker 2020-09-10 00:41
I’ve heard so many people praising Museveni as an exceptional leader, can someone help point out areas of his stellar leadership?

With Uganda’s software as well as her hardware are equally outdated, is it not about time to audit the muyekera?
Report to administrator
+1 #4 Lakwena 2020-09-10 15:03
In other words, we should not be surprised one of these days, if some of our countrymen/women are electrocuted and/or drowned in some of the Arcades basements, which will suddenly get flooded by rainstorm water.
Report to administrator
0 #5 Sabiti 2020-09-10 20:52
Kampala is one of the dirtiest cities in the world; probably among the top five dirtiest cities!
Report to administrator
0 #6 Odongkara 2020-09-11 10:12
I started living in Kampala from July 29, 1969 to date. Kampala then experienced almost daily heavy rains year round but there were no heavy fliodings like what are being witnessed now even with the slightest down pour.

Shoprite Jinja road stands on a natural water catchment basin, where does this water go to now? Kampala can now be described as the city of man made floods as a result of greed, corruption and incompetence.

Some idiots talk of "stellar leadership" under the NRM but the truth is that Uganda is besieged by a gang of thugs who do not wish the country well because they do not belong to it.

Jesus said the thief comes to destroy and kill, these guys are robbers and murderers. How do you destroy these swamps around Kampala and expect no floods? You will never defeat nature.
Report to administrator
0 #7 Odongkara 2020-09-11 10:15
Quoting Sabiti:

Even Juba the biggest world village is by far cleaner and more ordered than Kampala.

But the grand mullah still brags of being the best leader Africa has seen!
Report to administrator
0 #8 kabayekka 2020-09-12 04:41
KCCA civil engineers better understand this city as existing in the tropics alongside the equator.

And has 20 or more hills, rivers, swamps and one of the largest lakes in the world. And water is a force that finds its own level.
Report to administrator