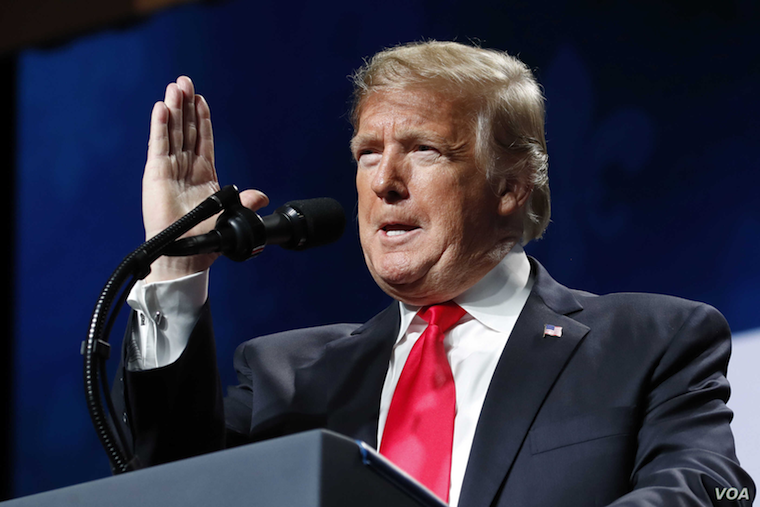 The alleged comments, which Trump denies, are full of profanity and include Trump saying of Mandela, “he was no leader,” and are part of a tell-all book by indicted former Trump lawyer Michael Cohen.

According to Cohen, Trump said "Mandela f***ed the whole country up. Now it’s a shithole. F**k Mandela. He was no leader.”

President Trump’s alleged comments about South African icon Nelson Mandela are ruffling feathers in the Rainbow Nation, with the beloved leader’s grandson sharply criticizing Trump for his leadership and with ordinary South Africans clamouring to the defense of the leader many here simply call Tata, or father.

Trump’s comments, as put forward in a book by his former lawyer Michael Cohen, were reported by American media over the weekend and were strongly denied by the White House. Cohen was convicted in 2018 of a slew of charges including campaign-finance violations, tax crimes and making false statements.

White House spokeswoman Kayleigh McEnany issued a statement over the weekend that said Cohen lacked credibility and noted he was a disgraced felon found guilty of lying to Congress.

According to the book, Trump said shortly after Mandela’s 2013 death that the former South African president was “no leader.” The other reported comments include an expletive Trump has allegedly used to describe African countries, plus slurs against Black people.

“Donald Trump is the last person to speak about Nelson Mandela, or about leadership. Because he needs to look at the failure of his own leadership, because America is currently burning right now. You know, there have been several Black Lives Matter movements across the country where people have been rioting, people have been burning, stores and you name it and protest after continuous killing of black people by their police,” he said.

The Mandela Foundation, in a statement this week, said, “we do not believe that leaders who conduct themselves in the way Mr. Trump does are in a position to offer authoritative commentary on (Mandela’s) life and work.”

The ruling African National Congress party also issued a statement on the alleged comments, saying on Tuesday “All freedom-loving people of the world are appalled by these insults which come from a person who, himself, is not a model of competent leadership.”

Mandela received the 1993 Nobel Peace Prize for his role in ending the racist apartheid system and ushering South Africa into a peaceful new era. In South Africa, he is universally loved and ever-present: since 2012, his face has appeared on all of the nation’s money.

Mandela said that to his knowledge, his grandfather did not have a relationship with Trump, and did not speak of him.

“When you attack, Nelson Mandela, for me, that says that you clearly do not see or value the very same principles and values that the people that we see as progressive in this world, who are trying to create a much more united world -- that you are not really such a person who has those same values. You know, we see him as a person who has actually created disparity and even division, not only in America, but influenced the cohesion of the global community.”

Trump has publicly made comments about South Africa before, tweeting a week after Mandela’s death that the nation was a ‘crime-ridden mess ready to explode.’

VOA approached dozens of people in three locations in Johannesburg. Many did not want to speak about Trump, but those who did were invariably critical of the American president. South African President Cyril Ramaphosa has not publicly responded to the alleged comments.

U.S. Ambassador to South Africa Lana Marks, a Trump appointee, said in a statement that she had discussed South Africa numerous times with the president, and “he has only ever spoken positively about the country.”

How came that nobody has ever published these things until 2 months before the next elections ?

The South Africans who are now reacting to rumours from lthe useless leberals are making a mistake.

And what if Trump had said these things ?

Didn`t Mandela insult President G.W. Bush when he ( Mandela said that Bush is a stupid man who can`t think ?
Report to administrator
+2 #2 Willy 2020-09-09 20:03
From President George Washington(RIP) to President Donald Trump, the quality of American leadership has really sunk to an abysmal level.

How did a great country like the USA end up with a leader of Trump's quality?
Report to administrator
+1 #3 Lysol 2020-09-09 20:13
Trump has been nominated for the Nobel Peace Prize.
Mandela was no angel.

The West only accepted him because of guilt and to protect the whites minority in South Africa. He later turned to be an appeaser of the very people who imprisoned him for 27 years. Stockholm Syndrome.
Report to administrator
+2 #4 Kalemera 2020-09-09 23:20
Quoting Wooden K.:

Trump run for president 5 years ago He has been President for almost 4 years .

How came that nobody has ever published these things until 2 months before the next elections ?

The South Africans who are now reacting to rumours from lthe useless leberals are making a mistake.

And what if Trump had said these things ?

Didn`t Mandela insult President G.W. Bush when he ( Mandela said that Bush is a stupid man who can`t think ?

Idiot.
Report to administrator
0 #5 Ennu 2020-09-10 00:55
[quote name="Wooden K."]Trump run for president 5 years ago He has been President for almost 4 years
Wooden, u being Trump’s diehard supporter shouldn’t make u condone the insults he throws at black People in general, let alone to our black icon leaders like Mandela.

I bet u turn a blind eye to Trumps racism, insults and disparaging comments against black people both in the US and Africa
Report to administrator
+1 #6 Akot 2020-09-10 14:17
Willy, understood, but,

Don't forget, the older we get, the more senseless we are, yet believe we know everything, especilly if in top position/rich!

No one +60 years should be elected to be leader of any country, for the sake of the future!

D. Trump is no longer the normal rich man he was, but an OLD angry man who gets no salary, yet wants to set his country on fire, after helping make economy better!

Is Museveni not more dangerous self pretentious heartless goon as he gets older & MUST be stopped?

Have we forgotten how difficult it's to live in villages with our old, so difficult as years go by, yet our old are much younger than Trump/Biden/Museveni..., right?
Report to administrator
+1 #7 Akot 2020-09-10 14:25
Lysol, agreed.

Mandela was more a FIGURE than a leader otherwise he would have made black S. Africans understand what belonging to a country, being part of working to develop it means!

Black Americans still wait to be served, while huge amount of money given by rich blacks is wasted without real projects put in place!

Me , I am a Ugandan who has been insiuted , discriminated and oprressed by dictators all my life , icluding this one .

trump has never hurm me , There is not skeleton in Uganda whose owner died because of Trump.

Quote me one direct insult from Trump to blacks and I will quote you several that have come from the mouth of Joe Biden.
Report to administrator
0 #10 Wooden K. 2020-09-10 21:10
Willy , if USA deserved uselss Obama , it also deserves poor quality Trump

It could get worse when USA is votes for a man who recently casually implied that, unlike latinos, blacks lack diversity thinking capacity..
Report to administrator