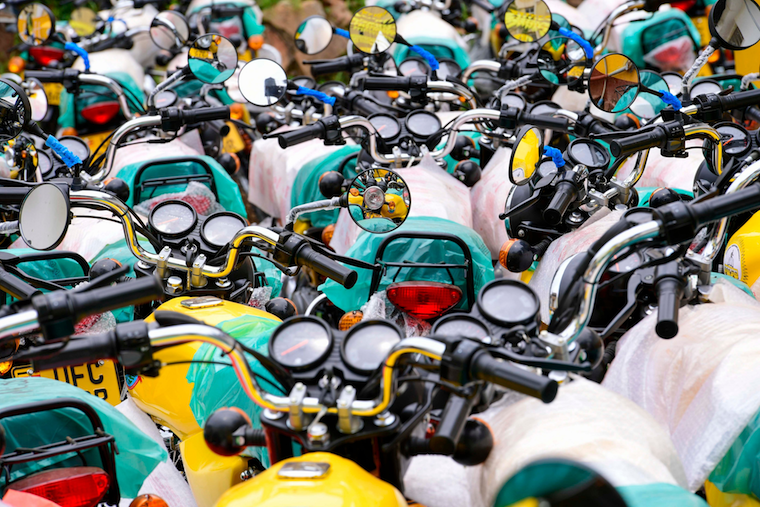 Museveni flagged off distribution of motorcycles for NRM chairpersons

President Yoweri Museveni has given Inspector General of Police (IGP) Martins Okoth Ochola a chilling ultimatum: You either do your work or I will do it myself!

Museveni disclosed the ultimatum he gave to the IGP today Monday at the NRM secretariat at Plot 10 Kyadondo Road in Kampala where he was flagging off the distribution of motorcycles to parish chairpersons of the ruling National Resistance Movement party across the country.

"I told the IGP that if the police doesn’t do their work, I will do it myself by arresting the police officers themselves," Museveni stunned his audience as he commented on the electoral violence that marred the NRM primaries held on Friday last week. At least 4 people were killed across the country during the primaries.

"There was violence in Bukono county [Namutumba district] where people were beaten. I got information that police has not done much work. Some (policemen) have been arrested and given police bond; there is no police bond for somebody who has attacked Ugandans!,” Museveni added.

Museveni vowed to deal with all persons who messed up the party primaries.  In some parts of the country, there were massive regularities where candidates who had been defeated ended up being announced winners. In some places like Namutumba, Isingiro, Ntungamo, Jinja, Katakwi, among others, there was violence that led to the killing and wounding of civilians. Museveni said that they are going to make sure that all those who participated in these irregularities and violence are held to account.

Museveni said although the violence was orchestrated by the politicians, the police personnel are to be held accountable for failing to contain it.

Last week, police spokesman Fred Enanga warned police personnel especially those guarding VIPs against being drawn into the politicians' political wrangles, reminding them that they would face the music if they did. With the president now threatening to go and conduct the arrests of errant policemen himself, IGP Ochola is likely to move fast to avert the spectacle.

Museveni wondered why police would shoot at unarmed people who were fighting amongst themselves: “That policeman must be arrested; even the ones who are threatening people you will go to jail for that if we get evidence,” a seemingly incensed Museveni said.

He also said that the state minister of Labour, Gender and Economic Development Mwesigwa Rukutana who was captured on camera attempting to shoot people over the weekend in Ntugamo after he lost the  Rushenyi primaries, will be charged with threatening violence and attempted murder.

“This game is finished,” Museveni said.

Rukatana has since been charged and remanded to Kyamugorani prison in Mbarara district in western Uganda. Museveni called upon all those dissatisfied with the election results to write petitions to the regional panels of elders which he said are going to be constituted to hear all election complaints.

“We are going to get three respected people who are not part of the struggles, then we shall go and audit village per village and we shall discover. If you have committed forgery, the registrar or the politician who ordered,  you all shall go to jail. The game is finished; the voting is by lining and if you miss-add, you are 'miss-add' yourself,” Museveni said.

Museveni’s speech came shortly before that of Justine Kasule Lumumba, the secretary general of the NRM who called upon the president to reign over some senior people who with impunity were freely changing the results of the elections.

“Some of our staff were lured into changing declaration forms on the way forgetting that people who had participated at the village don’t need to write; they registered the record in their faces…Some have done things with impunity… in Butemba county Kyakwanzi district, one of the candidates who got 3,000 votes brought in soldiers, cordoned off that place and was declared a winner and off they went away,” Lumumba said.

The ball is now in Ochola's court to get the police to execute their duties professionally and with impartiality. In March 2017, President Museveni warned Ochola's predecessor Kale Kayihura to clean the police force of wrong elements. As months passed with no visible sign of police officers shaping up, Museveni resorted to other security agencies who started arresting rogue senior police officers and charging them in the military court for various crimes.

Kayihura was then removed from office, arrested and jointly charged with the errant officers in the army court. To avoid similar fate, Ochola is likely to use a firmer hand on the police officers so that by the time of the February 2021 elections, there is no laxity in the force's execution of its mandate to maintain law and order.

if that was the kind of the democracy the self-styled liberators ushered to this country, we still have a long way to go.

Beatrice Anywar last time called M7 when she sensed things were going against her. The foolwing day she was declared winner of the Kitgum seat.
Report to administrator
0 #12 kabayekka 2020-09-08 10:00
In real senior business management one cannot go on blaming Tom and Jerry for all the faults.

Because as one points the blame finger on Ochola and Kale the other three fingers are pointing at you!
Report to administrator
+1 #13 Odongkara 2020-09-08 11:26
Museveni’s directive of allowing everyone to vote was the reason why more people voted than the actual number in their registers resulting into massive rigging and violence leading into loss of human lives in some areas.

Solution is just to drag the party chairman Museveni to court for issuing a directive that allowed unregistered party members to vote and the resultant violence and deaths.

The directive of President Museveni to allow persons with national IDs to vote in the party primaries even if not registered was illegal contrary to the constitution of the National Resistance Movement. Simple and clear.
Report to administrator
0 #14 Lakwena 2020-09-08 13:42
Quoting Larry mike:

Martins Okoth Ochola should instead be called Moo, his initials. Moo is so quiet on every issue. Kayihura was all kinds of things, but he at least commanded. ...

Larry Mike, Moo is quiet for a reason. Unlike Gen Kayihura who was not a trained police officer, but Mr. M7's NRM cadre, and a busybody everywhere like UPC, Afande Okot Ochola is conducting himself cautiously and professionally;

Less he gets caught up in Mr. M7's quagmire trap and only to be blamed.

In other words, where in the world have you e.g. seen a professional IGP everywhere at the scenes of crimes, doing what his junior/subordinate and/or ranks and file in the field should be doing? Nada.

How will his subordinates be accountable and disciplined if he has to do their work?
Report to administrator
0 #15 Lakwena 2020-09-08 13:59
Because of the diabolical liar that he is, and therefore does not mean whatever he says, Mr. M7 is now an international "laughing stone" (courtesy of Nasser Ssebagala).

Except to instill fear and terror into the population; why and where in the world e.g. has Mr. M7 seen policemen/women armed with AK47 manning a local and/or national election?

Even in countries where the AK47/machine guns are manufactured, you will not even see police officers near any election venue.

Shame on you Mr. M7, all your life has been causing harm and above all deaths in Uganda and region.

"Non-violence leads to the highest ethics, which is the goal of evolution. Until we stop harming others (all living beings), we are still savages." - Thomas A Edison
Report to administrator
12